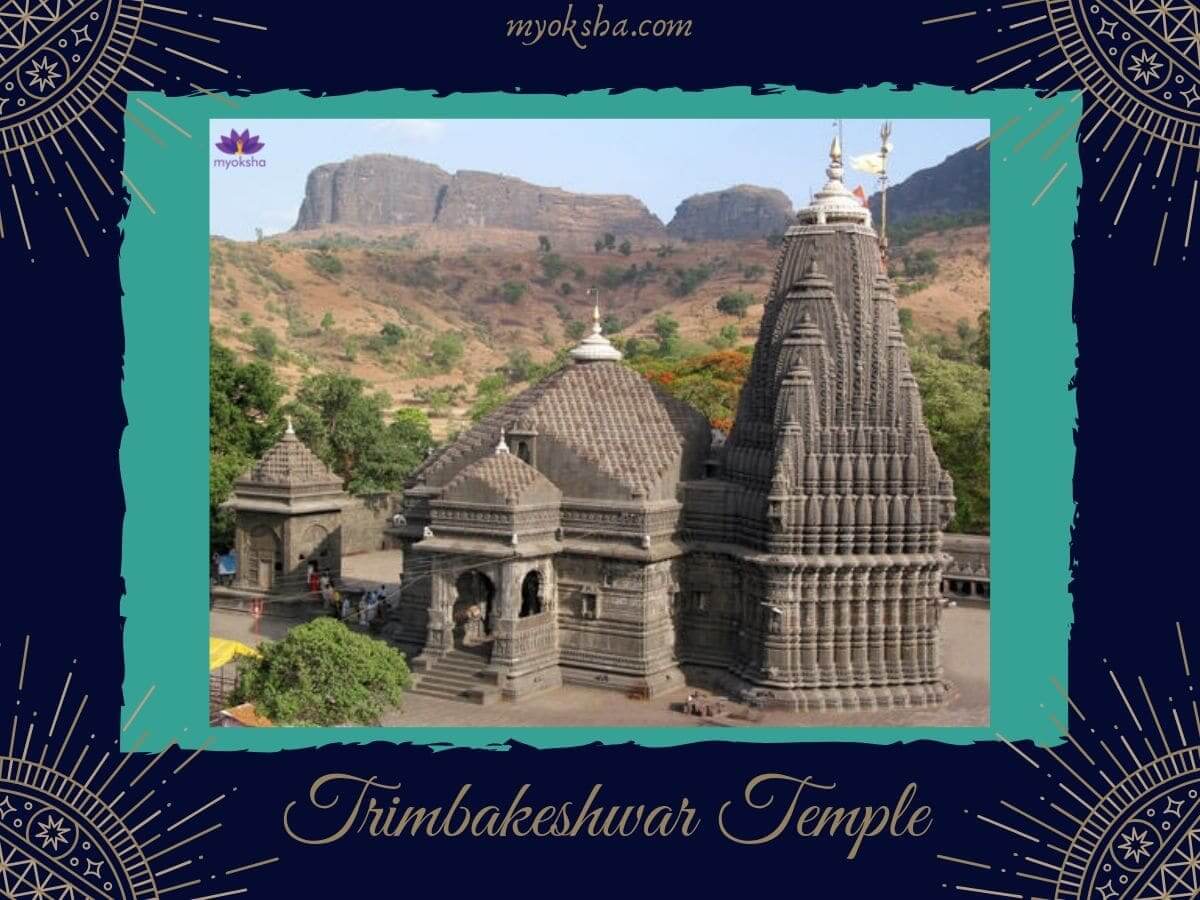 Planning to visit this temple? Have look at our Jyotirlinga in Maharashtra Tour Package.
Perform Rudrabhishek in Trimbakeshwar – Book Now.

What are the timings of Trimbakeshwar Temple?

Trimbakeshwar temple opens at 5:30 AM and closes at 9:00 PM. Rudrabhishek timings are from 7:00 AM to 8:30 AM. General darshan is allowed from a distance of 5 meters. Only men who perform special poojas are permitted to enter the inner sanctum.

On every Monday of the month, a procession is carried out in a Palki, which carries the silver Panch Mukhi Mukhota from the Trimbakeshwar temple to the Kushavarta tank and back.

The devotees coming for general darshan do not have to follow a strict dress code. However, male devotees who opt for performing special poojas inside the sanctum should wear a white dhoti and a towel. The dress will be provided by the pundits if required.

What are the Poojas and Rituals at Trimbakeshwar Temple?

Here’s the list of poojas and sevas at Trimbakeshwar temple:

Poojas like the Ganga Pooja, Ganga Bhet, and Tarpan Shraddha are also performed at the Trimbakeshwar temple so that the souls of the ancestors can rest in peace.

What is the significance of Trimbakeshwar Temple?

The Linga present here is called as Trimbaka or Trayambaka. It is named so because it contains three Lingas (small thumb-sized) representing Brahma, Vishnu, and Mahesh. Some people also believe that it is because Lord Shiva has three eyes.

The Trimbakeshwar temple is the only Jyotirlinga where the actual Linga is present in a depression or a cavity.

Devotees also believe that the eyes of the three Lingas are representations of Sun, Moon, and Fire each facing in different directions. It is said that the one who worships this Linga, worships all the three Gods at once and attains salvation.

The three Lingas of Brahma, Vishnu and Shiva are usually covered with a silver crown depicting their faces. However, on special occasions like Mahashivaratri, Karthik Purnima and Dussehra, a golden crown studded with diamonds and rubies is kept over the three Lingas. It is believed that the Peshwas donated the crown to the temple and that the crown actually belonged to the Pandavas.

The famous saint Sri Nivruttinath, who initiated the Nath community attained his Samadhi here at Trimbakeshwar. A temple dedicated to his mass knowledge of Shastras can be visited here.

As per the Skanda Puran, Padma Puran and the Dharma Sindhu, the unique ceremony of Narayan Nagbali (to remove Pitru Dosh) can only be performed at the Trimbakeshwar temple in India.

The beautiful and popular Nassak Diamond often counted among the 24 great diamonds in world history has its origin in the temple of Trimbakeshwar. The British East India Company captured the diamond and sold it to jewelers in Britain. It has changed hands since and is currently a property of Edward J. Hand from Connecticut.

A dip in the Kushavarta pond, the source of River Godavari is believed to wipe off sins from human’s life. The pond is the starting point for Kumbh Mela, which takes place every twelve years. The venue of Kumbh Mela rotates among the four holy cities of Haridwar, Allahabad, Nasik, and Ujjain. In Nasik, the Kumbh Mela is called the Simhastha Kumbh Mela.

According to the legend, Nasik is one of the places where Lord Vishnu dropped four drops of Amrit that he was carrying in a Kumbh (pot). Hence, taking a dip in these places is considered extremely sacred and spiritual.

What is the history of Trimbakeshwar Temple?

The history of the Trimbakeshwar temple relates to a legend of Rishi Gautam. According to beliefs, the land was a Tapobhoomi in the Satya Yuga, when many Rishis and Munis (Sages) lived here, including Gautam Rishi.  He lived at Trimbak with his wife Ahilya.

Once, there was a massive drought and the world was suffering from the lack of water. Gautam Rishi offered prayers to God Varuna (God of water). God Varuna accepted his prayers and offered him a tank that provided a never-ending supply of water. Using this water, the Rishi grew agricultural crops like rice, wheat, and other vegetables. Then he fed them to the other Rishis residing there.

After a period of time, some of the other Rishis grew jealous and wanted to interrupt Gautam Rishi. So, they prayed to Lord Ganesha asking him to send a cow to the Rishi’s field which would later die. However, Lord Ganesha warned the Rishis that this will not end well for them. But he still sent a cow into the field. Gautam Rishi saw it and then threw the Darbha grass to frighten it. But the cow died on the field.

Gautam Rishi and his wife Ahilya did penance to Lord Shiva. Shiva, happy with their devotion, ordered Ganga to come down to the Earth.

The River Ganga flowed down on Earth from the Brahmagiri hill and Gautam Rishi trapped it in a Kund (pond) called Kushavarta in the present day. He took a bath in it for purification. The River was Dakshin Ganga and is now famous as Godavari and Gauthami.

Then Gautam Rishi along with other Gods and the Godavari requested Lord Shiva to take abode here. Lord Shiva acknowledged them and turned into a Linga to stay there.

What are the festivals celebrated at Trimbakehswar Temple?

How to reach Trimbakeshwar Temple?

Here’s how to reach Trimbakeshwar Temple:

The Tourism Development Corporation (MTDC) Holiday Resort offers a variety of rooms ranging from standard, AC, and Non AC. The town is host to a variety of small private hotels and lodges — also, Nasik city, is just 25 km away from the Trimbakeshwar Temple. One can stay there too.

Where to eat near the temple?

A few small vegetarian restaurants serve good quality food at reasonable rates. One must not consume alcohol near the Trimbakeshwar temple premises. The town does not serve non-vegetarian food. The cuisine mainly includes traditional Maharashtrian as well as North Indian and South Indian dishes.

Some temples near Trimbakeshwar temple are:

Besides these temples, there are several holy places of importance near the Trimbakeshwar temple. Some of them are:

Some other famous temples in Maharashtra are:

How much time does it take for darshan in Trimbakeshwar?

You can complete the darshan within 15-20 minutes if you reach early in the morning. It might take 40-60 minutes in the afternoon and longer in the evenings. The time also depends on the days on which you are going to visit. Generally, it takes longer in the weekends as compared to the weekdays.

What is Trimbakeshwar famous for?

Trimbakeshwar is the only Jyotirlinga which has three shrines. Here Brahma, Vishnu, and Shiva’s shrines are available in the temple. This place is the origin of the river Godavari. The place is also famous for its scenic beauty in monsoon season. Amidst nature, untouched natural beauty surrounds Trimbakeshwar.

Where is Trimbakeshwar in India?

Trimbakeshwar is situated in the Trimbakeshwar tehsil. It is an ancient Hindu temple in the town of Trimbak. It is in the Nashik District in the Indian state of Maharashtra. 28 KM from the city of Nashik. It is 40 KM from Nashik Road.

How many Jyotirlinga are there in India?

There are a total of 12 Jyotirlingas in India. These Jyotirlingas are considered holy and sacred. A Jyotirlinga is the devotional representation of Lord Shiva. It is a symbol of power and purity. It is believed that these 12 jyotirlingas are ‘Swayambhu’ or self-manifested. Lord Shiva manifested himself in these places for his devotees.

How can I go to Trimbakeshwar from Nashik?

You can visit Trimbakeshwar via roadways. Trimbakeshwar is 28 KM from the city of Nashik. You can opt for a bus or a taxi service. It will take approximately 40-50 minutes to reach there. There are many buses on this route. One can travel by the MSRTC bus which is available from CBS (Central bus stop).

Who constructed the Trimbakeshwar temple?

How can I go to Shirdi from Trimbakeshwar?

If you have any questions about Trimbakeshwar Temple, please leave a comment below, and we will get back to you within one hour.