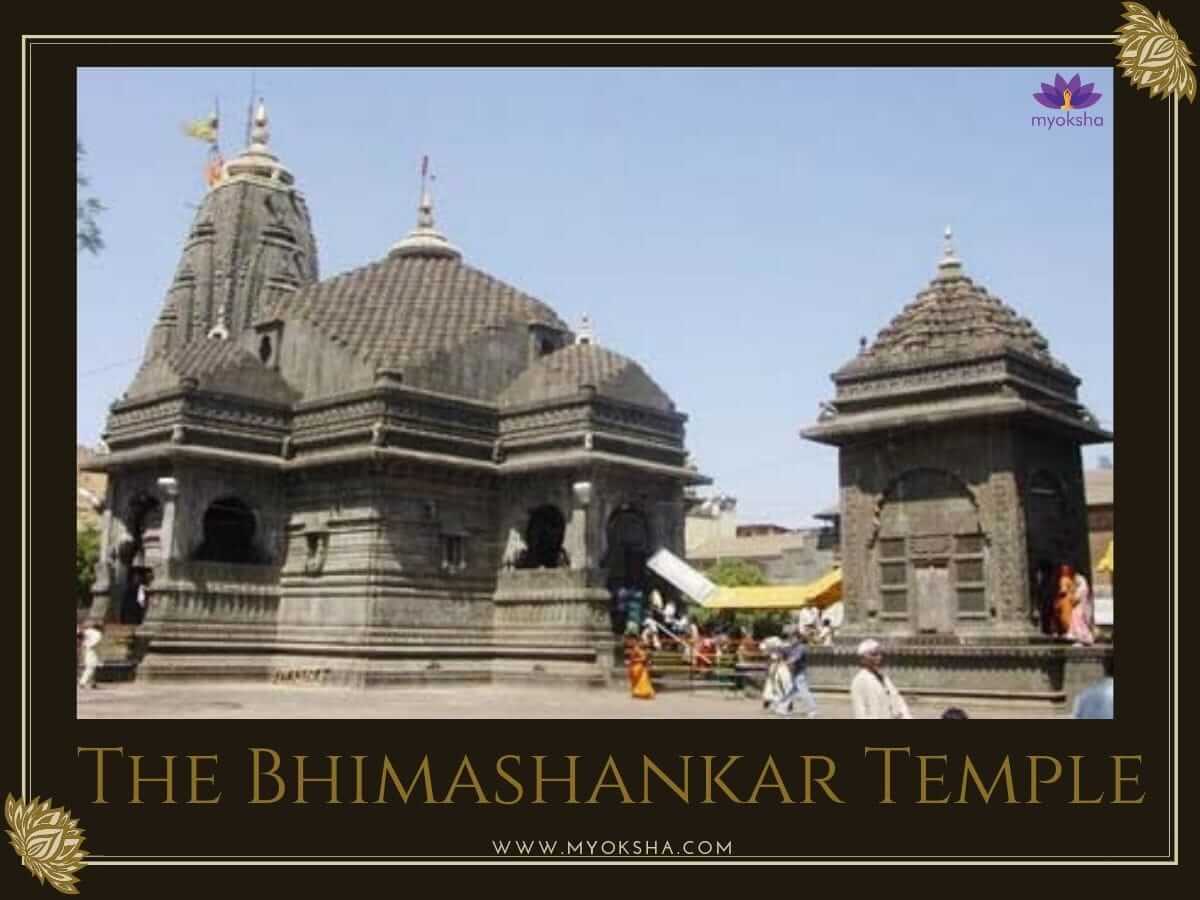 Bhimashankar Temple, dedicated to Lord Shiva is one of the 12 Jyotirlingas. It is in Bhimashankar reserve, near Pune in Maharashtra. The temple is also the source of the River Bhima. A holy dip in the river is believed to wash all the sins of a person.

Planning to visit this temple? Have look at our Jyotirlingas in Maharashtra Tour Package.

What are the timings of Bhimashankar Temple?

The temple opens at 4:30 AM in the morning and closes at 9:30 PM in the evening. The temple also performs various rituals during this time. The devotees can be a part of these rituals such as the afternoon and evening aarti.

The timings of Bhimashankar Temple are as follows:

What is the significance of Bhimashankar Temple?

The top of the Linga is divided by a narrow groove in the Linga. Each half of the Linga signifies Lord Shiva and Goddess Parvati. The Lord appears as “Ardhanareeshwara” in the Bhimashankar temple.

According to beliefs, water flows continuously from the Linga since time immemorial.

The River Bhima is considered sacred by the people because it is believed that the river is actually the perspiration of Lord Shankara (Shiva) after he defeated the demon Tripurasura.

The Mokshakund, located behind the Bhimashankar temple is believed to be the place where the Maharishi Kaushik (also known as Brahmarishi Vishwamitra) performed penance or Tapasya to please the Gods.

The temple administration allows pilgrims to conduct Abhishekam and Poojas to the Jyotirlinga by themselves with marigold and Bilva leaves.

What is the history of Bhimashankar Temple?

The history of the original sanctum dates back to the 13th century. Various renovations were done on the complex during different time periods. According to beliefs, in the 13th century, a woodcutter named, Bhatirao Lakhadhara, discovered the Jyotirlinga when his axe hit the tree, the ground started bleeding.

The villagers gathered there and offered milk to the tree which stopped the bleeding. The people of the village built a small temple at the site and named it the Bhimashankar Temple.

Several notable figures like Chhatrapati Shivaji, Peshwa Balaji Vishwanath, and Raghunath Peshwa also regularly visited the shrine and carried out poojas and renovations. The Diwan of the Peshwas, Nana Phadnavis built the Shikhar of the Bhimashankar temple.

As per one legend mentioned in the Matsya Puranam and the Shiva Puranam, there were three demons by the names of Vidyunmali, Tarakaksha, and Viryavana, and together they were known as the Tripurasura. They performed Tapasya and obtained a boon from Lord Brahma. The boon was that the Gods will construct three beautiful cities, each made of gold, iron, and silver for the Asuras. All three forts together will be called Tripura. However, the prophecy said that only a single arrow can destroy the city.

Demons from all over the world came and resided at the palaces. After the initial self-enjoyment, they eventually started troubling the people of the realm. They even misbehaved with Rishis and Maharishis, terrorized the common folk and eventually challenged the Gods. Therefore, Lord Indra accompanied by other Gods went to Lord Brahma to put an end to the Tripura, but Lord Brahma could not help and asked them to request Lord Shiva. Shiva obliged and the war between the Devas and the Asuras began. He also requested the help of Goddess Parvati and both of them took the form of “Ardha-Narya-Nateshwar” and descended to the Earth.

To destroy the Tripura, Lord Shiva asked Vishwakarma to build a chariot. The chariot had special features. The Goddess Earth (Prithvi) became the chariot, Sun and Moon became the wheels, Lord Brahma became the Sarathi, Mount Meru became the bow, Serpent Vasuki was the bow-string and Lord Vishnu became the arrow. Just as the three cities aligned, Lord Shiva burned them to the ground. Then the Gods requested Lord Shiva to take rest there and make the place his home. Lord Shiva turned himself into a Linga and made the Bhimashankar mountains his home.

What is the architecture of the Bhimashankar Temple like?

The Bhimashankar temple complex is small and has a simple structure with numerous sculptures depicting different Gods and Goddesses. The architecture of the temple follows the Nagara style and the Hemadpanthi style of construction. The temple consists of Garbhagriha, Sabhamandap, and the Kurmamandap.

The main door of the Bhimashankar temple is made of solid wood with figures of several gods and goddesses. A huge bell is there at the entrance of the temple. Chimaji Appa, brother of Bajirao Peshwa I gifted this bell. Two large Nandis are also there in the Temple. The one in front of the sanctum is very old and the other one is new. One can also visit the shrines of Lord Shani, Nandi, Lord Ram, and Dutta.

What are the festivals celebrated at Bhimashankar Temple?

Some of the festivals celebrated at Bhimshankar Temple are:

What are the Sevas and Poojas performed at Bhimashankar Temple?

The sevas and poojas that take place at Bhimashankar Temple are:

Devotees can perform the Rudrabhishekam and Mahapooja on every Monday, every Amavasya, every Pradosham day, and in the month of Shravan at a reasonable price.

The yearly poojas or sevas include:

Besides the above poojas, a Shashvat Pooja can also be performed at the temple. One can perform these poojas for 1 day every year for a period of 20 years. The poojas are:

How to reach Bhimashankar Temple?

Here’s how to reach Bhimshankar temple:

Limited options are available for staying near the Bhimashankar temple. The temple administration runs a guesthouse named Jeevan Guest House that provides the basic facilities. However, nearby towns have options like the Blue Mormon Jungle Holiday Resort, Ecogreens Sankalp Farms, and Holiday Maiyaan Karjat.

Several small restaurants are present near the temple premises such as Shivshakti and Shankar Vishranti where the visitors can eat. The cuisine available is a mix of both North Indian and South Indian food items. Moreover, the food items available here are primarily vegetarian.

What are some temples near Bhimshankar Temple?

Some of the temples near Bhimshankar temple are:

Some other famous temples in Maharashtra are:

Is the Bhimshankar Temple open throughout the year?

Yes, the Bhimashankar Temple is open all 365 days of the year.

The entry to the Bhimashankar Temple is free of cost.

Yes. There is are palki services available for the specially-abled and senior citizens.

Which is the best time to visit the Bhimashankar Temple?

The summers at Maharashtra start from March and continues until June. The summers here can be very hot. Temperatures during the daytime often go up to 36 º C.

If you have any questions about the Bhimshankar Temple, please leave a comment below, and we will get back to you within one hour.