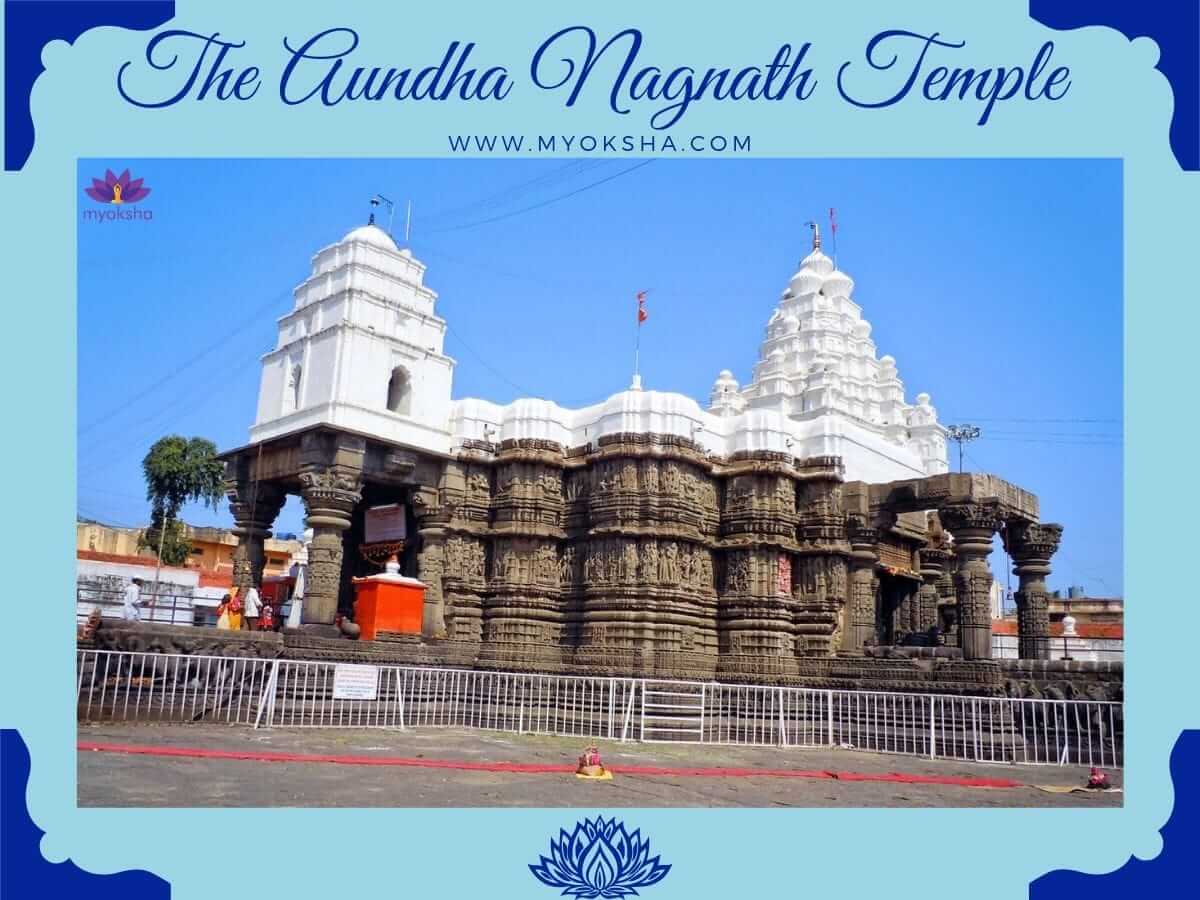 Aundha Nagnath Temple (one of the 12 Jyotirlinga Temples) in Hingoli, Maharashtra is dedicated to Lord Shiva who is worshipped as Lord Nagnath in this region. The devotees praying to Lord Nagnath believe that the Lord will guide them to the correct path of life, just as he did with demons at Darukavane.

Planning to visit this temple? Have a look at our Jyotirlingas in Maharashtra Tour Package.

What are the timings of Aundha Nagnath Temple?

The temple opens at 4:00 AM in the morning and closes at 9:00 PM in the evening. The temple also performs various rituals during this time. The devotees can be a part of these rituals such as the afternoon and evening aarti.

The timings of Aundha Nagnath Temple are as follows:

What is the significance of Aundha Nagnath Temple?

It is a popular belief that the Nagesh Linga or the Jyotirlinga is the Adhya or the first Jyotirlinga on Earth. Devotees believe that by praying at this temple, one can protect themselves against all kinds of poisons.

Since this form of Shiva is Nagnath since he has a snake around his neck. This association with snakes has led to a belief that this Linga is very powerful and potent against negating the harmful effects of all poisons. Devotees have often sighted snakes with open hoods guarding the Linga.

The Aundha Nagnath Temple is one of the Top 50 Famous Temples of India.

What is the history of Aundha Nagnath Temple?

The history of Aundha Nagnath Temple dates back to the period of Pandavas. Yudhistra, the eldest among the Pandavas, first built this majestic temple during his exile. It is also believed that Mughal Emperor Aurangzeb tried to raze down the Aundha Nagnath temple. But it is said that a swarm of bees attacked his men and Aurangzeb gave up and left the temple.

However, damages were made, to a certain extent, to this sacred Jyotirlinga. Later, Rani Ahalyabai Holkar, Queen of the Maratha Malwa Kingdom, repaired and renovated the temple.

The Aundha Nagnath Temple is a pious site for followers of both Hinduism and Sikhism.

Sant Namdev Maharaj was a well-known saint and poet. He is also considered as one of the Gurus in Sikhism and his writings are a part of Sri Guru Granth Sahib, the holy book of Sikhs.

It is believed that he used to sing praises of Lord Shiva every day at the temple. But the priests objected to this saying that it disturbed their routines. They drove him away. Since he was such a staunch devotee, the Lord turned the temple to face him and the priests were left facing the back of the temple. Thus, the entire temple stands rotated and directions of the Linga and Nandi are different from other temples.

What is the legend of the Jyotirlinga?

During their exile, the Pandavas built their hermitage in a forest in this region of Hingoli. The cows from their hermitage drank the water from the nearby river and released milk into the river. Bhima noticed this one day and informed Yudhistra.

The Pandavas felt the presence of a great God residing in the river. Thus, they began to remove the water. Beyond a certain point, the water was boiling hot. Bhima struck the river thrice with his mace. Blood started oozing from the spot and a Linga emerged. Yudhistra then built a temple and instated the Jyotirlinga.

What is the legend of Nageshwar Darukavane?

The Aundha region was lush with thick forests in which serpents lived. It was popular as Darukavane, named after the Asuras – Daruk and Daruka. The demons harassed the hermits living in the area and imprisoned them. This angered the Gods who fought the demons and drove them away.

But Daruka was an ardent devotee of Lord Shiva and was blessed by a boon from Goddess Parvati.

The boon gave them the power to shift the entire forest into an island. And the demons continued to harass the hermits from the island. Among the imprisoned hermits was an ardent devotee Lord Shiva named, Supriya. She invoked the powerful Rudra Mantra along with the priests. Lord Shiva then appeared and destroyed the demons.

Daruka repented for their sins and asked for Lord Shiva’s forgiveness. He requested that he stay in the forest. Lord Shiva and Goddess Parvati accepted his request and assumed the form of a Jyotirlinga. They stayed in Darukavane as Lord Nageshwar and Nageshwari.

What is the structure of Aundha Nagnath Temple like?

The Aundha Nagnath Temple structure is strong as it consists of stones from the Pandava period. Therefore, the temple is nearly 3000 years old.

The Garbhagriha and Linga are in the basement level and devotees have to climb down to worship the main deity. The Linga faces the South and the Gomukha faces the East. The corridors of this temple are huge and are supported by eight pillars in an oval shape. The Garbhagriha consists of the Nagesha Lingamurthi inside.

One of the shrines inside the Aundha Nagnath Temple complex houses the Runomochan Teerth as is also famous as Saas Teerth and Bahu Teerth (Mother-in-law and Daughter-in-law). Interestingly, the Saas Teerth has brackish water while the Bahu Teerth has sweet water. Once every 12 years during Kapila Shashti, the water from Kashi Ganga is offered here and the water of the teerth would turn crystal clear.

What are the poojas and rituals of Aundha Nagnath Temple?

The poojas that take place at Aundha Nagnath Temple are:

The rituals that take place at Aundha Nagnath are:

What are the festivals celebrated at Aundha Nagnath?

Some of the festivals celebrated at Aundha Nagnath Temple are:

How to reach Aundha Nagnath Temple?

Restaurant options at Aundha Nagnath Temple are very few. Travelers eat at Dhabbas which one can find on the highway or at the hotels in Nanded and Parbhani.

Some of the temples near Aundha Nagnath are:

Is the Aundha Nagnath Temple open throughout the year?

Yes, the Aundha Nagnath Temple is open all 365 days of the year.

The entry to the Aundha Nagnath Temple is free of cost.

Which is the best time to visit the Aundha Nagnath Temple?

The summers at Maharashtra start from March and continues until June. The summers here can be very hot. Temperatures during the day-time often go up to 36 º C.

If you have any questions about the Aundha Nagnath Temple, please leave a comment below and we will get back to you within one hour.