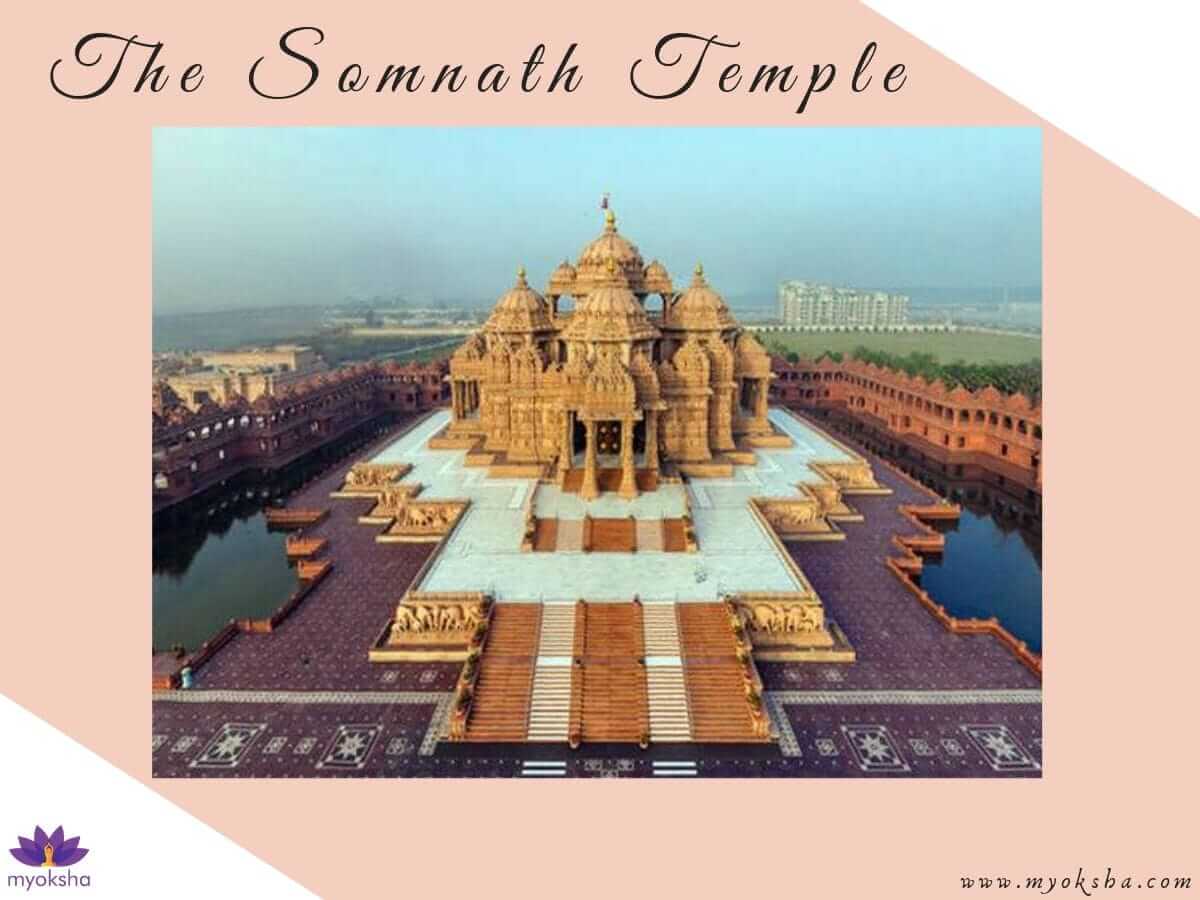 Somnath Temple is the first among the 12 holy Jyotirlingas. This sacred temple is dedicated to Lord Shiva. The word Somnath translates to ‘The Lord of the Moon‘ which is a form of Lord Shiva. The temple is located at Prabhas Patan, near Veraval port in Saurashtra, Gujarat. It is also called “The Shrine Eternal” because the temple was looted and destroyed six times in the past. However, it was gloriously rebuilt every single time after that.

Planning to visit the Somnath Temple? Have a look at our Dwarka Somnath Tour Package.

The Somnath Temple is one of the Top 50 Famous Temples in India.

What are the timings of Somnath Temple?

The temple opens at 6:00 AM and closes at 10:00 PM. The temple also performs various rituals during this time. The devotees can be a part of these rituals, such as the morning, afternoon, and evening aarti.

What are the poojas performed at Somnath Temple?

The prices of the poojas are as follows:

What is the significance of Somnath Temple?

The Somnath Temple is the first Jyotirlinga among the 12 Jyotirlingas in Hindu mythology. Shiva appeared as a fiery column of light from this Linga which makes it Swayambhu. Millions of people worldwide come every year to visit this temple.

It is said that the Syamantak Mani (Philosopher’s Stone) associated with Lord Krishna is hidden inside Shiva Linga in the temple. According to beliefs, this magical stone has the ability to produce gold. It is also responsible for creating a magnetic field around itself which keeps the Linga floating above the ground.

The Linga consists of iron, and the roof of the sanctum is made of loadstone. The builder of the shrine assured that the magnetic force exerted by the loadstone kept the Linga floating in the air. It is also a popular belief that one can wash away their sins by taking a dip in the holy water of the Someshwar Kund.

What is Prabhas Patan?

Prabhas Patan is the holy site of Sangam or the junction of three great mythological rivers – Saraswati, Hiranya and Kapila. It is also the site where Lord Krishna was struck by an arrow while resting under a tree.

Another extremely famous and sacred Jyotirlinga is Kashi Vishwanath Temple which located in Kashi, Uttar Pradesh.

What is the history of Somnath Temple?

According to legend, the time period and how the temple was first constructed is unknown. But it is said that the second temple was built by the Seuna Kings of Vallabhi (Yadavas of Devagiri) in around 649 CE.

The first attack on the temple was by Al-Junayd, the Governor of Sindh in around 725 CE, during invasions of Gujarat and Rajasthan. The King Nagabhata ll reconstructed the third temple in 815 CE.

In 1024, Turkic Sultan, Mohammad Ghazni bombarded the Somnath temple. He demolished the Jyotirlinga and killed all the devotees who attempted to save it from the loot. Later, King Bhoja of Malwa and King Bhimdev I of Patan restored this as a tribute to Lord Someshvara.

The next attack on Somnath was by Alauddin Khilji’s forces. The idol of the god was stolen, and many devotees were captured in the process. King Mahipala I, the Chudasama king of Saurashtra, rebuilt it in 1308. Later, Muzaffar Shah I and Mahmud Begada of the Gujarat Sultanate, respectively, made repeated assaults in 1375 and 1451.

The temple also faced the rage of Aurangzeb in 1665. Finally, in 1783 the Peshwas, Bhonsles, Queen Ahilyabai of Indore and Shrimant Patilbuwa Shinde of Gwalior together reconstructed it. The present temple is fashioned in the Chalukya style.

According to the legends, Garbhashay initially contained many gems. Over a period of time, many invaders took them. Three silver gates, originally belonging to the Somnath temple, were brought back to India from Lahore. This was after the Maratha king Mahadaji Shinde defeated Muhammad Shah.

After unsuccessful attempts to re-install them in the Somnath temple, they were then gifted to two temples in Ujjain – the Mahakaleshwar Temple and Gopal Mandir where they are still present.

What is the legend of the Someshwar Kund?

Prajapati Daksha had the 27 Nakshatras born in the form of his daughters. All of his 27 daughters were married to Lord Chandra (The Moon). However, Chandra loved only Rohini and neglected his other 26 wives. This angered their father Daksha. He cursed Chandra to decrease in size every day. To counter this curse, Chandra offered penance to Lord Shiva who granted him a boon.

The boon was that Lord Shiva would place Chandra on His head. This way, Chandra would lose one Kala (shade) every day and decrease in size for 15 days only to grow back in the next 15 days. When the moon fades away fully, it is called no moon day (Amavasya). When he grows to full size, it is called the full moon day (Purnima). Thus, these are called as Krishna Paksha and Shukla Paksha (each Paksha of 15 days). As a result, Shiva was also called Someshvara (Lord of the Moon). The Kund honours Shiva for removing the curse.

What is the structure of the Somnath Temple?

The temple is divided into three main areas – the Garbhagraha, the Sabhamandapam, and the Nrityamandapam. The Shikhar of the temple is 150 feet high. The Kalasam or the Kalash weighs 10 tonnes. The flag pole at the top is 8.2 meters long. The temple reflects the skills of the Sompura Salats, Gujarat’s famed stonemasons.

An inscription in Sanskrit is found in the Banastambha also known as the “Arrow Pillar”. The Abadhit Samudra Marg and Tirstambh indicate that there is no land in a straight line between the seashore until Antarctica.

What are the festivals celebrated at Somnath?

Some of the festivals celebrated at Somnath Temple are:

How to reach Somnath Temple?

You can also travel to Somnath from Vadodara. Have a look at our Dwarka Somnath Vadodara Tour Package.

Somnath temple lies at a distance of 411 km from the heart of Ahmedabad.

Please carry a valid identity proof for making reservations at the hotel.

Some of the hotels where one can stay near Somnath Temple are:

All the Guesthouses managed by the Somnath Temple Trust hosts a restaurant, which serves various cuisines like Gujarati, Punjabi, and Chinese. Apart from those, many small eateries are also present around the temple complex.

What are the famous temples near Somnath?

Some temples near Somnath temple are:

Some other famous temples in Gujarat are:

Is the Somnath Temple open throughout the year?

Yes, the Somnath Temple is open all 365 days of the year.

The entry to the Somnath Temple is free of cost.

Can anyone enter the temple?

Non-Hindus need to take prior permission from the General Manager’s Office. Hindus can enter the temple without any permits.

Who should be contacted for performing a Havan/Yajna?

No. All electronic gadgets are strictly prohibited (viz. mobile, camera, laptop). They can be stored in lockers available in the Cloak Room. The cloakroom facility is free of cost.

Tirth Darshan Bus facility is available at a nominal charge which takes pilgrims to the nearby temples for darshan. Bus leaves from the main gate of the temple and its timings are 08:30 AM and 03:30 PM.

The summers at Somnath start from March and continues until June. The summers here can be very hot. Temperatures during the daytime often go up to 42 º C.

If you have any questions about The Somnath Temple, please leave a comment below, and we will get back to you within one hour.