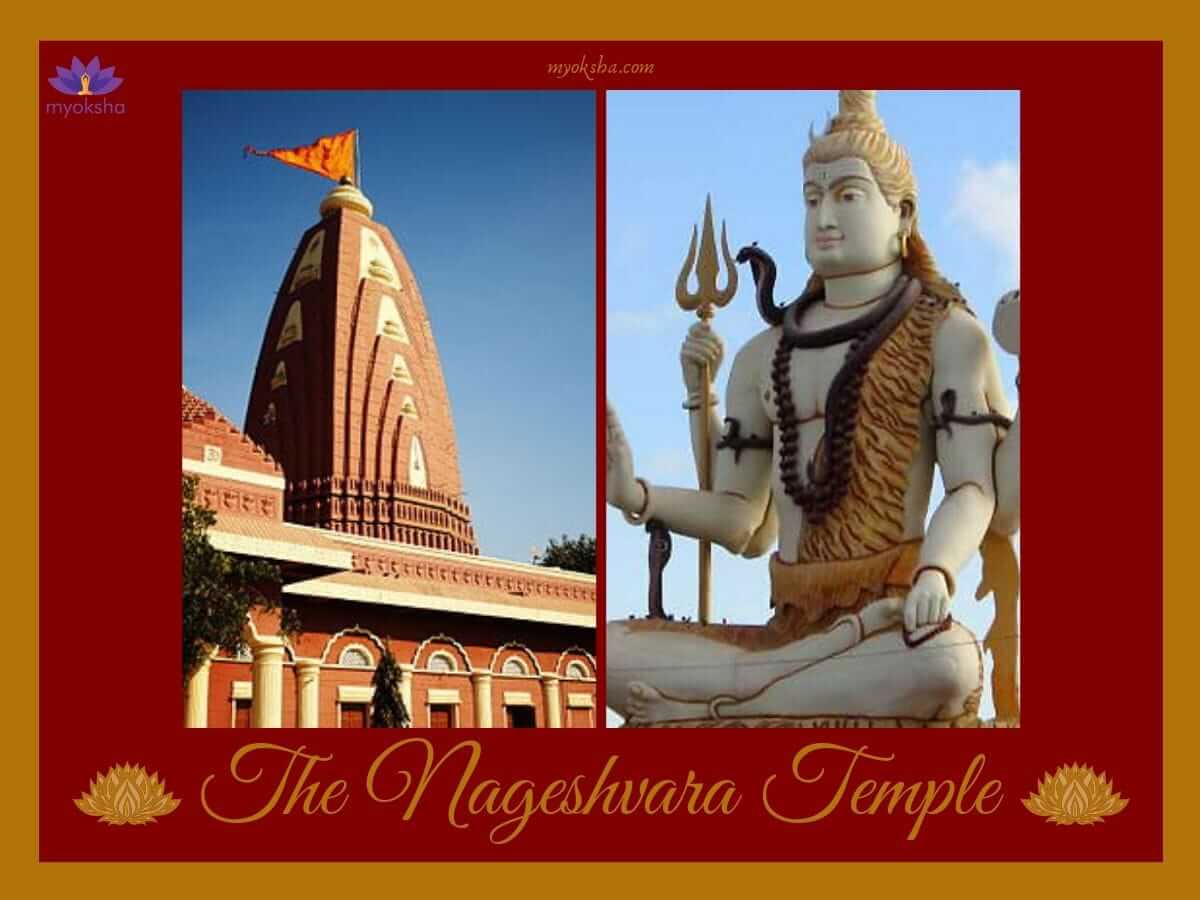 Nageshwar Temple, also known as the Nageshvara Temple, lies on the coast of Saurashtra in Gujarat. It is dedicated to Lord Shiva and is one of the 12 Jyotirlinga Shrines mentioned in Shiva Purana. The Jyotirlinga is in an underground sanctum. The major attraction of this temple is a 25-meters tall statue of Lord Shiva in a large garden with a pond surrounding the statue.

Planning to visit this temple? Have a look at our Dwarka Somnath Tour Package.

What are the timings of Nageshwar Temple?

The temple opens at 6 AM and closes at 9 PM. The temple also performs various rituals during this time. The devotees can be a part of these rituals, such as the morning and evening aarti.

The timings of Nageshwar Temple are as follows:

What are the sevas and poojas performed at Nageshwar Jyotirlinga?

Devotees can perform the Rudrabhishekam and Mahapooja with Bhog on Ek Somvar (one Monday), Chaar Somvar (four Mondays), and in the month of Shravan at a reasonable price.

What is the significance of Nageshwar Temple?

The significance of the Nageshwar temple is that this powerful Jyotirlinga protects the devotees from all kinds of poison. Devotees also believe that the one who prays to the lord becomes free of poison i.e.negativities. The lingam at Nageshwar is unique as it consists of a stone popularly known as the Dwarka Stone.

The Rudra Samhita Shloka refers to Lord Nageshwar with the phrase ‘Daarukaavane Naagesham’.

Nageshwar Mahadev Sivalingam is facing South while the Gomugam is facing east. There is a story behind this position. There once was a devotee named, Naamdev. He was a mere saint who used to dedicate songs to Lord Shiva.

One day when he was singing bhajans in front of the Lord, the other devotees asked him to stand aside and not hide the Lord. To this, Naamdev asked them to suggest one direction in which the Lord does not exist, so that he can then stand there. The enraged devotees carried him and left him on the south. To their astonishment, they found that the Linga was now facing South with the Gomugam facing east.

What is the history of Nageshwar Temple?

According to the history of the Nageshvara temple, there are two stories behind this Jyotirlinga. The two legends relate to the existence of this numinous temple. The first story dates back to a hundred years in the Shiva Purana, about a demon couple named Daruka and Daruki.

Now known as Dwarka, the city was earlier named after the Asura couple and called, “Darukavana”. Daruka’s wife Daruki was a devotee of Goddess Parvati. But, Daruka was a cruel demon who found joy in troubling people around him.

One day, he imprisoned an ardent devotee of Lord Shiva named, Supriya, with several others. Daruka misused the blessings granted to him and continued to torment the local folks by one means or another. While in captivity, Supriya advised all the people to loudly chant the mantra of “Om Namaha Shivaye”.

Supriya told the villagers that this mantra is powerful enough to protect them all. When Daruka came to know about this, he was furious and he went to kill her. This is when Lord Shiva appeared in the form of a Linga on earth. Shiva couldn’t kill the demon because of the boon granted to him by his wife, Parvati. Hence, he assured Supriya and all others that he would protect them all in the form of the Jyotirlinga.

According to another legend, a group of dwarf sages known as “Balakhilyas” worshipped Lord Shiva in Darukavana for a long time. To test their persistence as well devotion, Lord Shiva went to them as nude wearing only nagas, i.e., serpents on his body.

All the wives of the sages got attracted to him and went after him, leaving their husbands behind. This action made all the sages angry and they cursed Shiva to lose his linga. Hence, the Shiva Linga fell on earth and the whole earth trembled.

Then, Lord Vishnu and Lord Brahma appeared and requested Shiva to save the planet from getting destroyed and to take back his linga. After consoling the sages, Lord Shiva then took back his linga and promised his divine presence in the form of Jyotirlinga in Darukavana forever.

What are the Festivals Celebrated at Nageshwar Temple?

Some of the festivals celebrated at Nageshwar Temple are:

How to Reach Nageshwar Temple?

Here’s how to reach Nageshwar Temple:

How far is the Nageshwar Temple from the Somnath Temple?

The Somnath Temple is another one the 12 holy Jyotirlingas dedicated to Lord Shiva. The temple is located at Prabhas Patan, near Veraval port in Saurashtra, Gujarat. It takes around 4 to 5 hours by road to reach Somnath Jyotirlinga from Nageshwar temple.

There are various places to accommodate yourself comfortably, within a reasonable budget. The hotels also offer express check-in and check-out, high-speed Internet, Wi-Fi, airport & railway pickup. The names of a few of them are:

The best places nearby to feast on the local food would be the Charmi Restaurant and Hotel Prasad.

Where are some temples nearby?

Some of the temples near Nageshwar Temple are:

Is the Nageshwar Temple open throughout the year?

Yes, the Nageshwar Temple is open all 365 days of the year.

The entry to the Nageshwar Temple is free of cost.

No, there is no online darshan facility available.

No. No such facilities are available. Although, a wheelchair can be made available upon request.

No. No such facilities are available.

The summers at Dwarka start from March and continues until June. The summers here can be very hot. Temperatures during the daytime often go up to 42 º C.

If you have any questions about The Nageshwar Temple, please leave your comment below and we will get back to you within one hour.