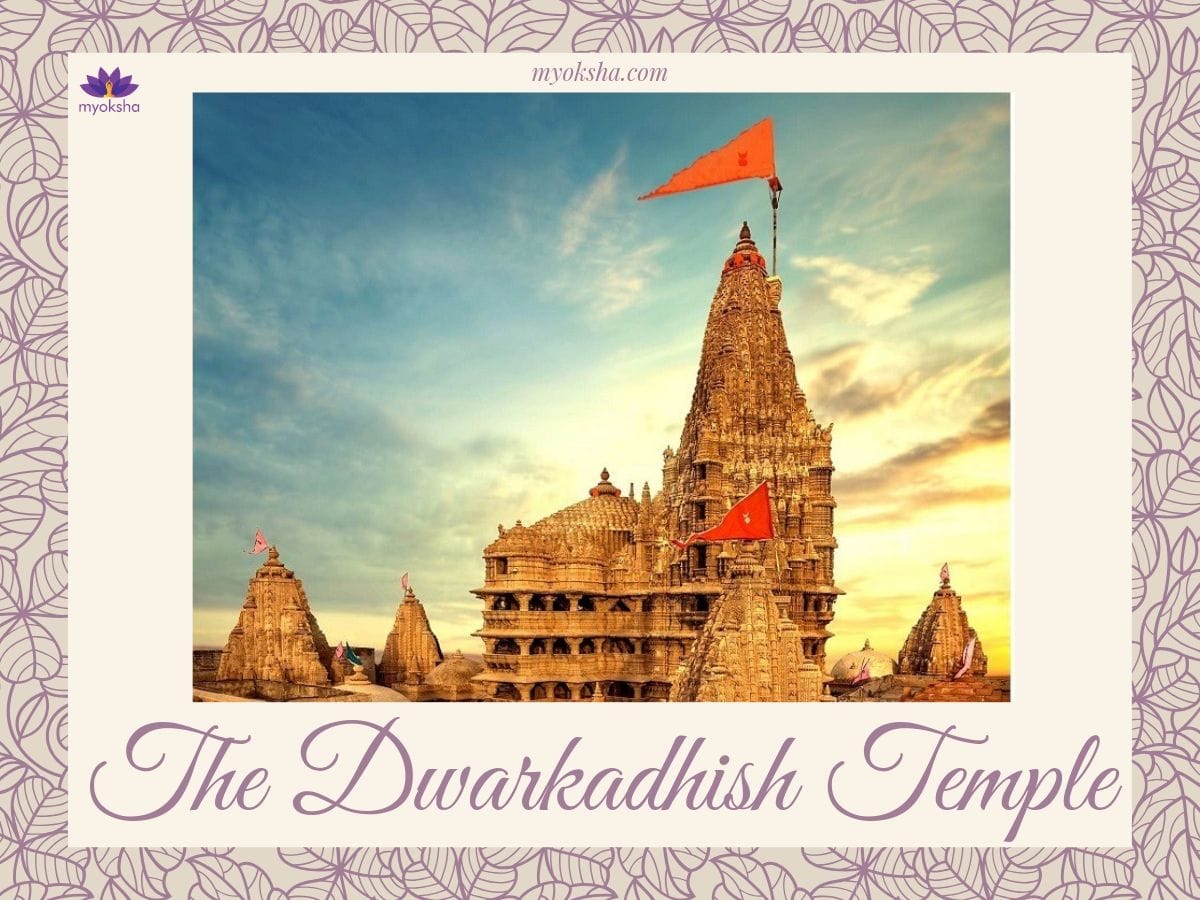 Dwarkadhish Temple, one of the Char Dham pilgrimages, is situated in the city of Dwarka in Gujarat. Dwarka lies on the banks of river Gomti, in Saurashtra. It is historically considered as the capital of Lord Krishna. The city eventually submerged under the sea except for Temples.

Planning to visit The Dwarkadhish Temple? Have a look at our Dwarka – Somnath Tour Package.

The Somnath Temple and the Nageshwar Temple are the famous Jyotirlingas dedicated to Lord Shiva in Gujarat.

What are the timings of the Dwarkadhish Temple?

The Dwarkadhish Temple opens at 6:30 AM and closes at 9:30 PM. The temple also performs various rituals during this time. The devotees can be a part of these rituals, such as the morning, afternoon, and evening poojas. The temple remains closed from 1:00 PM to 5:00 PM.

The timings of the Dwarkadhish Temple are:

What are the sevas and poojas performed at Dwarkadhish Temple?

The temple performs the following daily poojas and sevas:

What is the significance of Dwarkadhish Temple?

The significance of Dwarkadhish Temple is that Dwarka is one of the Sapta Puris in India. According to popular belief, the Dwarkadhish Temple stands over the original place of Hari – Graha, the home of Krishna. Mahabharata states that the castle of Lord Krishna was built in Gold.

The Pandavas played and spent their childhood there. This temple is also a part of the famous Pancha Dwaraka Tour.

Archaeologists have unearthed copper coins, boulders, pillars and pottery samples from the underwater excavations in Dwarka. Hence, they have concluded that a well-established city existed there in the 2nd Millennium.

Also, explorations between 1983 and 1990 show that the city consisted of six sectors. They were extended about a mile from the shore. Offshore investigations have found evidence of stone slabs, ports and other construction materials dating back to 15th Century. Hence, it supports the existence of an ancient city at the time of Lord Krishna. Further, the layout of the city mentioned in ancient manuscripts matches that of the city unearthed by The Marine Archaeology Unit of India.

The Dhwajaji – The Mast Flag atop the main Temple is unique and sacred. It is Aadhi Bhoutik in nature. The Dhwaja or the Flag is made of 52 yards of cloth. 52 small flags are woven individually in each yard of cloth. Each Yard symbolizes the entrances to the ancient city of Dwarka.

According to scriptures, 56 administrators ran the administration of Dwarka. Four of them were Lord Krishna, Balram, Pradyuma, and Anirudhji. These 4 are still worshipped in temples that are untouched by the sea. However, for the rest of the 52 people, the flag acts as a remembrance. The colours of the Dhwajaji are changed every day.

In the premises of the Dwarkadhish Temple, a small temple called Kusheshwar Mahadev Temple is present. According to a legend, Kush was a demon who lived in Kushasthali. People prayed to Lord Krishna to save them. So, Lord Krishna fought and crushed the demon. Krishna buried him completely into the ground. Hence, he set up a temple of Lord Mahadev there. The Shiva Linga lies almost 20 feet below the ground.

The Dwarka Mutt is one of the four mutts established by Sri Adi Shankaracharya. The others are Sringeri, Jagannath Puri, and Jyotirmath. Another name for Dwarka Mutt is Shanti Peeth. It is sacred to take a dip at the Gomati Ghat opposite to the Dwarkadhish Temple. Genuine worship at this temple washes away one’s sins.

What is the history of Dwarkadhish Temple?

The history of Dwarkadhish temple is that according to Brahmi script, the temple’s first renovation was done around 100 BC. Later, Shri Adi Shankaracharya visited the temple in 800 BC and renovated it. He established the shrine of Adyashakti on the fourth floor of the temple.

Muhammad Shah attacked and destroyed the temple in 1241 AD.  Five Brahmins fought with them and died. So, the shrines near the Dwarkadhish Temple are for them. Local merchants and rulers enlarged the temple in the 15th – 16th century. And in 1965, the Pakistan Navy tried to attack the temple but failed to do so.

Another interesting legend associated with Dwarka is that of Gopi Lake. According to mythology, after leaving Mathura, Lord Krishna never went back. The Gopis of Mathura came to Dwarka to meet Krishna. After several Ras Leelas with Lord Krishna, they offered their lives to the land. Hence the name of the lake is “Gopi Talav”.

What is the story of the origin of Dwarka?

Lord Krishna’s uncle Kansa was the ruler of Mathura. His father-in-law, Jarasandha influenced him greatly. Also, Kansa terrorized and tortured the people of Mathura. Due to cruelty towards people, Krishna eventually killed him. When Kansa died, Jarasandha was furious. So, he invaded Mathura several times.

However, he was unsuccessful in annexing it. But the Yadava clan suffered huge losses and Lord Krishna decided to move them elsewhere.

Further, the story of how Krishna formed the city of Dwarka has two versions. One states that Lord Krishna flew on the Garuda and reached the Saurashtra peninsula. However, in the other version, Lord Krishna invoked Vishwakarma (Lord of Construction). He asked him to build a new city.

Vishwakarma said that it is possible to build the city if the Samudra Deva (God of Sea) gives them land. Lord Krishna worshipped the Sea God who eventually gave him 12 Yojanas of land. Consequently, Vishwakarma built the city of Dwarka for Lord Krishna.

What is the legend of Jagannath Temple?

According to the legend of Jagannath Temple, during the cremation of Lord Krishna at Dwarka, Balram and Subhadra were overcome with grief. So, they took the half-burnt body of Krishna and ran into the ocean. At the same time, King Indradyumna in Puri had a dream.

It encouraged him to visit the ocean in search of the remains of Lord Krishna.

Later, he built a gigantic temple dedicated to Lord Krishna. It is famous as the Jagannath Temple. There, he established the three wooden idols of Krishna, Balaram, and Subhadra. Also, he placed the ashes of Lord Krishna inside the wooden deity.

According to the Archeological Survey of India, the main shrine of the building is 2000 to 2200 years old. There is an umbrella-like monument in the memory of Lord Krishna to the East of Harimandir.

What is the architecture of Dwarkadhish Temple?

It has five storeys and stands on 72 limestone pillars. Also, it consists of three parts – the Prakashgarh (Nijmandir), Sabahgrah and the Shikhar. The total height of the Shikhar is 157 feet.

Furthermore, there are two Shikhars present in the Temple – the Nij Shikhar and the Ladwa Shikhar. The Nij Shikhar is five-storeyed. It houses the main deity, Lord Krishna. There are two main gates to the Dwarkadhish Temple – The Moksha Dwaar (entrance for pilgrims) and the Swarg Dwaar  (Gate to Heaven).

What are the festivals celebrated at Dwarkadhish Temple?

Some of the festivals celebrated at Dwarkadhish temple are:

What is the dress code of Dwarkadhish Temple?

One should prefer formal and decent dresses while visiting the Dwarkadhish Temple. Avoid shorts, bermudas, and mini skirts.

How to reach the Dwarkadhish Temple?

Here’s how to reach Dwarkadhish temple:

Where to stay near Dwarkadhish Temple?

The government runs many guest houses in the city. Some of them are Circuit House, Gayathri Athithi Grah and Birla Dharmshala where one can stay. The temple trust runs several Dharamshalas. These include Kokila Niraj Dham, Patelwadi Dharamshala, and Jay Ranchhod Dharmashala. Several private hotels are available to stay in Dwarka.

Where to eat near Dwarkadhish Temple?

Several hotels and restaurants are available near the Temple and in other parts. Mainly vegetarian cuisine is available.

What are some temples near Dwarkadhish Temple?

Some of the temples near Dwarkadhish temple are:

Is the Dwarkadhish Temple open throughout the year?

Yes, the Dwarkadhish Temple is open all 365 days of the year.

The entry to the Dwarkadhish Temple is free of cost.

The summers at Dwarka start from March and continues until June. The summers here can be very hot. Temperatures during the daytime often go up to 42 º C.

If you have any questions about The Dwarkadhish Temple, please leave a comment below, and we will get back to you within one hour.