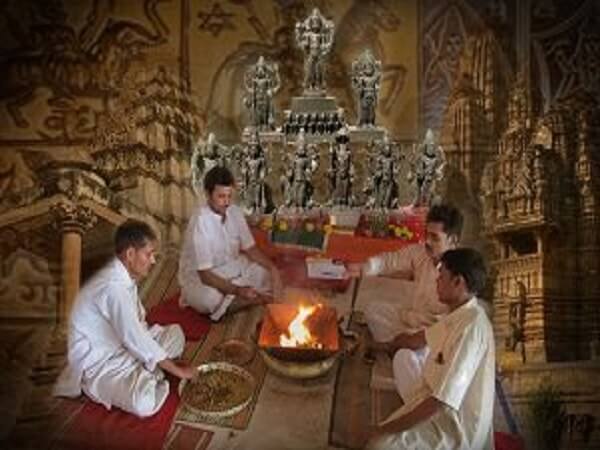 Navagraha Homam is a powerful ritual devoted to the nine planets of the Solar System. It is performed to gratify the planets who are the sole reason behind all the contentment and misfortunes taking place in a person’s life.

The term, Navagraha itself denotes the nine celestial bodies which have been the center to all the astrological calculations in Indian Astrology. The nine planets namely the Sun, Moon, Mars, Mercury, Jupiter, Venus, Saturn and the two shadow planets Rahu and Ketu constitute the significant and most noteworthy Navagrahas.

This Homam is important because these nine “grahas” play a remarkable role in a person’s horoscope. They control his/her desires, karmas and their outcomes. The homam helps in reducing the negative effects (dasha) of the planets thus improving the positive energies related to a person. Hence, the Navagraha Homam delights the nine planets playing a vital role in deciding and directing a person’s lifetime.

Who Should Perform Navagraha Homam?

Firstly, a person needs to meet an Astrologer. The learned astrologer would then read carefully his/her natal chart. He would attempt to understand the effects of all the planets in his/her Kundli.

The outcomes made by calculating planetary positions of the individual’s natal chart would help astrologer in deciding the best time to conduct the Navagraha Homam. Moreover, it is always suggested for individuals with below mentioned problems to perform this homam ones in lifetime:

Though performing Navagraha Homam has many benefits, but the most noteworthy are as follows:

Below are some benefits of the nine planets that can be restored through the homam:

When should we perform this homam?

The Homam can be performed after consulting a learned astrologer. An astrologer would recommend the proper Muhurat based on an individual’s natal chart. The date and time are fixed as per the performer’s nakshatra on any single date.

Below is the list of material required for performing homam:

Where to perform Navagraha Homam?

A Purohit/Pandit can make arrangements for the Navagraha Homam at any location, be it the performer’s home, office or a temple.

The major costs of the Navagraha Homam include the ingredients and Dakshina for the priests. The ingredients cost somewhere between Rs. 2000/- to Rs. 3000/-. Hence, the total cost of the Homam is less than Rs. 10,000/-. However, if you get the Homam performed at the temple, then there are chances wherein an individual requires to pay an additional fee to the temple authorities.

If you have any questions about Navagraha Homam, please leave your comment below and we will get back to you within one hour.

Join our Whatsapp group to get daily photos on temple darshans