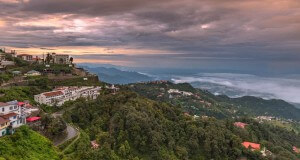 Uttarakhand has many beautiful tourist destinations. Most important amongst all, it is the home of the Chhota Char Dhams- Yamunotri, Gangotri, Kedarnath, and Badrinath. Haridwar, Nainital, Rishikesh, Valley of Flowers, Mussoorie and many other places are also equally visited by tourists.

Yamunotri Temple: Yamunotri Temple is situated in the Garhwal Himalayas at an altitude of 10,800feet. It is located in the Uttarkashi district of Uttarakhand. The temple is dedicated to Goddess Yamuna. Amar Singh Thapa built this temple. However, it got destroyed and was re-built in the 19th Century. It stands amidst beautiful mountain peaks and the sacred waters of the Yamuna River. the temple is constructed in the Nagar style. The temple is built with Granite stones that have been obtained from the surrounding mountains. The temple is opened for public viewing on the Akshaya Tritiya. It is closed on the event of Yama Dwitiya which falls on the second day after Diwali. It is one of the best places in Uttarakhand. It is the first destination of the Chhota Char Dham Yatra.

Gangotri Temple: The Gangotri Temple is situated at an elevation of 10,200feet in the Himalayan Range of Uttarakhand. The Temple is dedicated to Goddess Ganga. It is situated amidst beautiful mountains and the waters of the sacred river, Ganga. The River Ganga originates here and is called Bhagirathi. It originates from the Gangotri glacier at Gaumukh. It is a 19km trek from Gangotri town. It is the second destination in the Chhota Char Dham yatra of Uttarakhand. It is considered one of the best places to visit in Uttarakhand.

Kedarnath Temple: Kedarnath Temple is located near Mandakini River in the Garhwal Himalayan Range. It is situated at Rudraprayag district of Uttarakhand. It is at a height of 11, 760feet. This temple worships Lord Shiva as the ‘Lord of Kedar Khand’- Kedarnath. The Kedarnath Temple remains open only for six months a year. It begins from the day of Akshaya Tritiya in March-April. It closes on the eve of Karthik Purnima in November. The temple remains closed for the next six months due to extremely harsh winters.

Badrinath Temple: This temple is situated along the banks of Alaknanda River in the Garhwal Hills. It is at a height of 10,280 feet. It is situated in Uttarakhand.  Apart from being the final destination of Chhota Char Dham, it is also a part of the Char Dham Yatra. It is also one of the 108 Divya Desams of Lord Vishnu. Two peaks named Nar and Narayan surrounds it. The temple can be visited only between April and November and remains closed due to extreme weather conditions prevailing in the Himalayas during winters. Kedarnath Temple is also a part of Chhota Char Dham Yatra of Uttarakhand.

Other places to visit in Uttarakhand are:

Haridwar: Translating to ‘Gateway of God’, it is one of the seven holiest places in India. It is believed that a dip in the holy running waters of Ganga here helps one wash away all their sins. It is one of the Hindu pilgrimage sites and is visited by thousands of devotees every year. Haridwar is known as the ‘Pilgrim Capital’. It is a place where the tourist gets enchanted by the religious and spiritual energy of the place. Haridwar is located t the foothills of the Himalayas. It is one of the oldest cities in India.

Rishikesh: It is located at the confluence of River Ganga and River Chandrabhaga. It is called the ‘Yoga Capital of the World’. This place in an important pilgrimage site. Rishikesh has a spectacular nature and is surrounded by spectacular hills. Various Yoga institutes and ashrams teach about the various aspects of Hinduism here. It is one of the best places to visits in Uttarakhand.

Valley of Flowers: Valley of flowers is an Indian National Park present in the state of Uttarakhand. It is rich in flora and fauna including endangered and rare species of plants as well as animals. This diversity also represents a unique transition zone between the mountain ranges of Zanskar and Great Himalaya. It is home to a number of rare and endangered species such as red fox, snow leopard, musk deer, etc. Moreover, it provides aesthetic pleasure to visitors because of the number and variety of flowers that grow here. It also has religious significance in Hinduism because yogis have visited the valley for meditation since time immemorial. Moreover, local people used to believe that Gods and fairies inhabited the valley.

Mussoorie: Mussoorie is a well-liked tourist spot in Uttarakhand. In Mussoorie, you can witness a spectacular view of the Himalayas.  It is located at an altitude of 6000feet. Mussoorie is referred to as the ‘Queen of Hills’. This place is visited by many tourists every year. It is considered to be one of the best places in Uttarakhand.