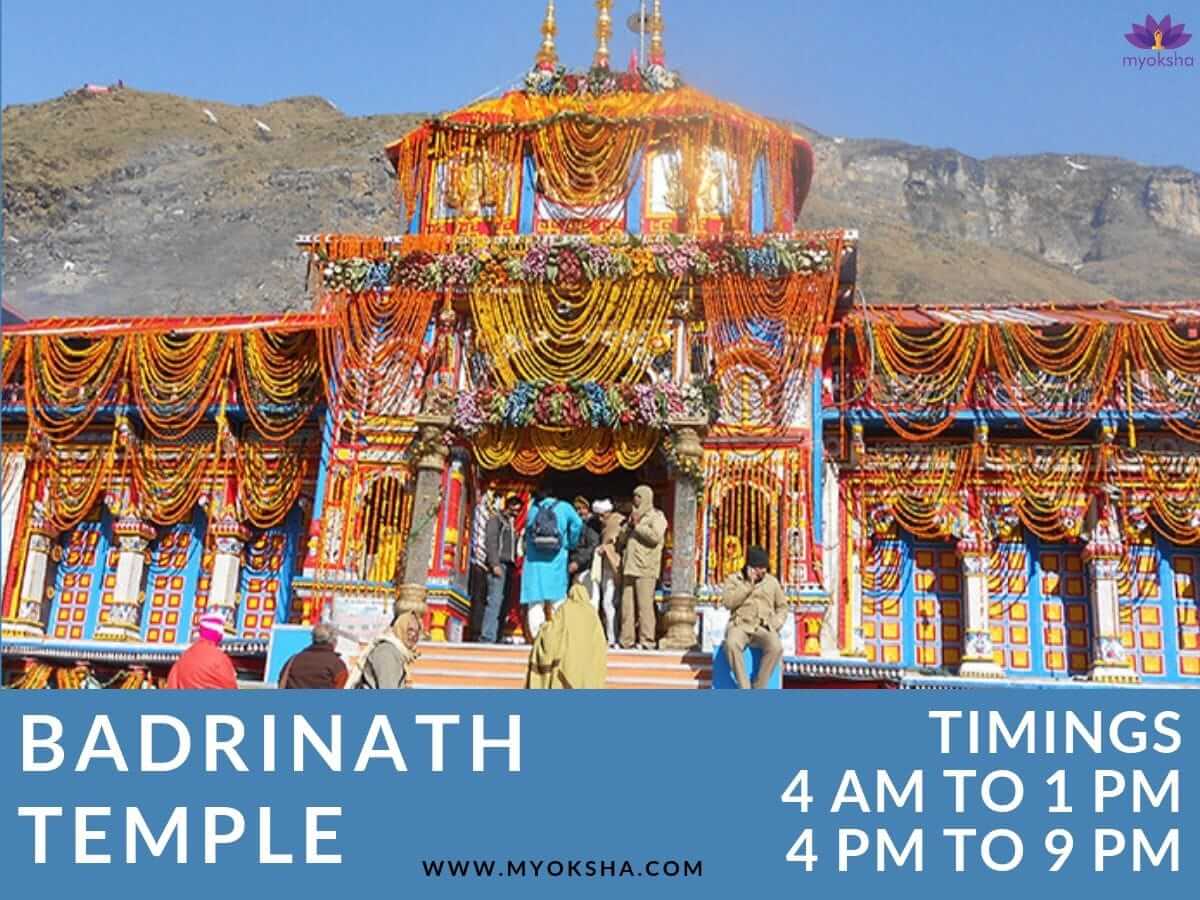 Badrinath Temple is surrounded by two peaks named Nar and Narayana. The peaks symbolize twin forms of Lord Vishnu. Neelkanth mountain is in the backdrop of the temple. The temple opens from April to November.

What is the best time to visit Badrinath?

The climate at Badrinath is cold and chilled the whole year. The peak seasons for the visitors are from May to June and September to October. During monsoon, there is so much rainfall at Badrinath. It is advisable not to visit during monsoon.

Can I visit Badrinath now?

The Kapat of Badrinath temple opens on 10th May for the year 2019. One can visit after that any time.

Can I visit Badrinath in December?

At Badrinath, winter starts from October and lasts till April. The average temperature falls down to 5°C during day time. In December, Badrinath experiences heavy snowfall. It is advisable not to go during December.

How can I go to Badrinath from Haridwar by train?

Can I go to Badrinath by car?

You can hire a taxi from the railway station to reach Badrinath. There are buses available too from nearest bus stations. However, it is not recommended to go by car. Find out why?

How far is Badrinath from Rishikesh?

Does Badrinath have snow?

From November to April, it is winter in Badrinath. Snowfall happens very often during winters. The average temperature is 5°C.

What is the altitude of Badrinath?

Badrinath Temple is at a very high altitude of 3300 meters.

Can we visit Badrinath in March?

It is not ideal to visit Badrinath in March as it will be still winter. For 2019, Badrinath temple opens on May 10th.

How old is Badrinath temple?

Adi Shankara established Badrinath as a pilgrimage site in the ninth century. It is said to be believed that he resided in this place for six years.

Which god is in Badrinath Temple?

Badrinath Temple is dedicated to Lord Vishnu and is situated in Badrinath town of Uttarakhand. Hence, it is also called Badrinarayan Temple.

It is believed that Badrinath Temple is founded by Adi Shankara. He built the temple in 7th century C.E.

Which river flows in Badrinath?

Alaknanda river flows close to the Badrinath temple of Uttarakhand. The fast flowing river rushes down from the Badrinath valley.

Are Badrinath and Kedarnath same?

In Uttarakhand, Badrinath and Kedarnath are the two holy Dhams. Badrinath is 40.8 kms away from Kedarnath.

What to wear at Badrinath?

• Summer: The days in summer are very hot but at night it’s very cold. You will have to carry some loose cotton clothes and some woolens too.
• Winter: Badrinath is very cold in winter and hence you’ll need to carry heavy woolens with you.

What are the timings of Badrinath temple?

Badrinath Temple timings are from 4:00 am to 1:00 pm and from 4:00 pm to 9:00 pm every day. The temple is open only for 6 months a year due to extreme weather conditions. The temple opens on the day of Akshaya Tritiya in May. It closes on the eve of Vijayadashami in November.

Here are the Badrinath temple darshan timings and pooja timings:

What are the sevas and poojas at Badrinath Temple?

The self-manifested statute of Lord Vishnu is worshiped in a religious manner. Poojas and sevas are performed at the temple twice a day. Here are the different kinds of sevas and poojas that take place inside the Badrinath temple:

People can have the darshan at Badrinath temple at free of cost. Devotees can also do some special poojas or aartis.

What is the history of Badrinath temple?

Badrinath Temple History dates back to many centuries. There is no historical record about Badrinath temple.

Vedic scriptures mention the origin of the temple. According to which, the temple was a Buddhist shrine till the 8th century. Adi Shankara converted it to a Hindu temple later. The architecture of the temple is very much like a Buddhist temple. This has lead to a lot of argument about its origin.

According to Skandapuranam, the temple was originally established by Adi Shankara. He founded a black statue of Vishnu lying on the banks of Alaknanda River. He established it in a cave near the Tapt Kund which later became famous as the Badrinath Temple.

A traditional story says that Shankara expelled all the Buddhists in the region. The successors of the king Kanak Pal governed the temple for years. The income of the villagers was used to feed & accommodate pilgrims. The king enjoyed obedience by the devotees before proceeding to the temple.

Another legend says that Lord Vishnu sat in meditation at this place. During the meditation, Vishnu was not aware of cold weather. Goddess Laxmi then protected and sheltered him in the form of the Badri tree. Pleased by Lakshmi’s devotion, Vishnu named the place Badrika Ashram.

Why is Badrinath popular?

The statue of Lord Vishnu in the temple is Swayambhu in nature. It is one of the 8 self-manifested statues of Vishnu. Badrinath is one of the temples among the Char Dham Pilgrimage in India. It is also a part of the 108 Divya Desam dedicated to Lord Vishnu.

It is mentioned in the Vamana Purana that the sages Nara & Narayana did penance here. ‘Nara’ and ‘Narayana’ is the dual form of Lord Vishnu’s 5th avatar. It is also believed that Narada achieved moksha on Narad Shila located at Badrinath. The great sages like Kapil Muni, Gautam and Kashyap also did penance here.

The Badrinath Temple is a part of the Panch Badri temples. The other temples are Yog Dhyan Badri, Bhavishya Badri, Adi Badri, and the Vriddha Badri. The holy river Saraswati also originates from a glacier near Badrinath.

The water of the hot spring Tapt Kund is said to have medicinal properties. A dip in the kund can cure a lot of diseases.

The Skanda Purana states that there are several sacred shrines in heaven, on earth, and in hell. But there is no shrine like Badrinath. It is one of the most visited pilgrimage centers of India. Lakhs of devotees travel to this pilgrimage every year.

What to wear while going Badrinath?

Badrinath temple is situated in the backdrop of Neelkanth mountains. The weather is cold throughout the year. Rainfalls and snowfalls often occur there. Hence, one should wear proper winter clothes with mufflers and gloves. An umbrella is also must to carry.

How to reach Badrinath temple?

Some of the festivals celebrated at Badrinath temple are:

Where to stay near Badrinath temple?

Some of the places where one can stay near Badrinath temple are:

Some of the temples near Badrinath temple are:

If you need any help regarding this yatra, feel free to leave a comment. We will give you reply in an hour.