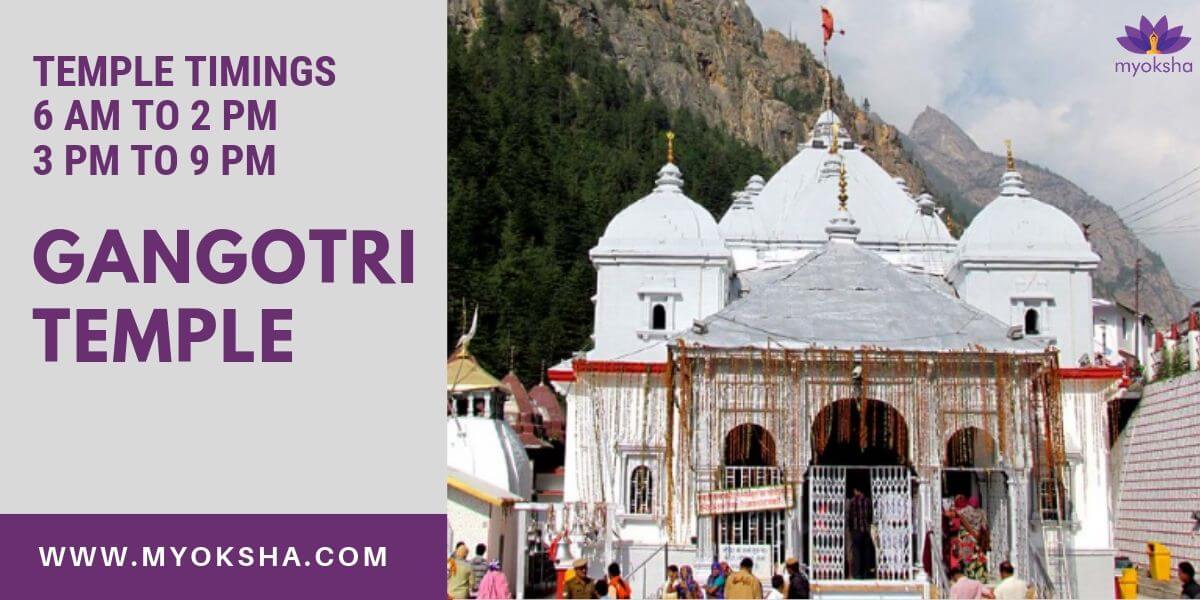 Gangotri Temple is a Hindu temple dedicated to Goddess Ganga. The temple is situated in the Uttarkashi district of the state of Uttarakhand. It is located at an altitude of 3,100 meters in the Greater Himalayan Range on the banks of Bhagirathi river. Gangotri is the source of the Ganga river. It is the second stop of the Char Dham Yatra.

Here are the opening and closing dates of Gangotri Temple for 2019:

The temple opens on the day of Akshaya Tritiya which usually occurs in May. It closes after the celebration of Diwali. After that, the temple staff return to their villages. A white sheet of snow covers the valley for the next 6 months. During this time, the idol of the goddess is kept at Mukhba village.

Gangotri glacier also called Gaumukh is the actual source of the Ganga river. It is a 19 km trek from Gangotri. The road to the glacier is extremely difficult for people to reach. Hence the shrine has been located at the foot of the hill.

What is the best time to visit Gangotri?

It is best to go in the opening months of May to June and in the closing months of September to November. Avoid going during the monsoon months of July to September.  There are chances of landslides and floods in monsoon.

The kapat of Gangotri temple opens on 7th May for the year 2019. One can visit after that any time.

Can I visit Gangotri in December?

At Gangotri, winter starts from October and lasts till April. The average temperature falls down to 5°C during day time. In December, Gangotri experiences heavy snowfall. It is advisable not to go during December.

How can I go to Gangotri Temple?

If you are coming from abroad, Delhi is most connected. By rail, Haridwar is best. From there you have to travel by Road to reach Uttarkashi and then Gangotri.

Can I go to Gangotri by car?

You can hire a taxi from the railway station to reach Gangotri. There are buses available too from nearest bus stations. However, it is not recommended to go by car. Find out why?

How far is Gangotri from Rishikesh and Haridwar?

Does Gangotri have snow?

From November to April, it is winter in Gangotri. Snowfall happens very often during winters. The average temperature is 5°C.

How old is Gangotri?

Gorkha General Amar Singh Thapa originally built the temple in the 18th century. Also, Bhagiratha meditated for years. He called Ganga to clean the sins of his ancestors.

Which God is in Gangotri?

Gangotri temple is dedicated to Goddess Ganga. As per Hindu mythology, Ganga is the daughter of Lord Brahma.

Is registration compulsory for going to Gangotri?

What are the timings of Gangotri Temple?

Here are the timings of Gangotri Temple:

What are the pooja and aarti at Gangotri Temple?

The poojas and aartis of Gangotri temple are:

What is the history of Gangotri Temple?

Gorkha General Amar Singh Thapa originally built the temple in the 18th century. As per Hindu mythology, Ganga is the daughter of Lord Brahma. One day, Brahma was washing the feet of Vamana (incarnation of Lord Vishnu). At that time, she was born from Vishnu’s kamandala (a spout shaped vessel).

According to a legend, King Sagara killed so many demons on the earth. To show his victory, he performed an Ashwamegh Yagya. A lot of horses hence taken on an uninterrupted journey around the earth. They were accompanied by the king’s 60,000 sons. However, Lord Indra got the fear of losing his throne.

Indra then took away the horses to fail the Yagya. He tied them in the ashram of Sage Kapila who was in deep meditation. King Sagara’s sons searched and found the horses near the meditating sage. 60,000 angry sons of King Sagara disturbed sage Kapila during his meditation. As a result, sage Kapila cursed them and they all perished.

Later, the king sent his grandson Anshuman to sage Kapila for forgiveness. Kapila said that only the water of heavenly Ganga can wash away their sins. Anshuman and his son Dileep tried but could not please Brahma.

Later, Bhagiratha, the grandson of King Sagara, meditated for years. He called Ganga to clean the sins of his ancestors and to liberate their souls. Hence, Goddess Ganga took the form of a river.

What is the significance of Gangotri Temple?

A rock shaped Shiva-Linga form naturally in Gangotri every year with the beginning of the winters. At this place, Shiva allowed Ganga to flow through his locks. At the time of Ganga’s arrival onto Earth, Lord Shiva agreed to bear its force. He absorbed it into the locks of his hair which slowed the flow.

The locks of the hair also split it into seven streams. These are Bhagirathi, Alaknanda, Janhvi, Saraswati, Bhilangana, Rishiganga, and Mandakini. The river is called Bhagirathi at the source. After reaching Devprayag, it acquires the name Ganga. Later, it meets with Alaknanda river.

The water of river Ganga collected at Gangotri is believed to be an Amrit (nectar). It is considered as a holy drink. People carry this water to their home. They use this holy water in several poojas at home.

On the day of Ganga Dussehra, one should take a holy dip in the Ganga river. It cleanses the human soul of all the sins. People also dip the ashes of a dead person in Ganga river. It releases the soul from the cycles of death and rebirth.

In architectural terms, Gangotri temple is very simple and naturally plain. It does not have any detailed carvings. Sculptures are also not present anywhere. The temple is constructed with white marble stones symbolizing peace. The steps leading to Sabha Mandap meets the main sanctum. A small Shiva temple is also present inside the main temple.

What to wear while going Gangotri?

Gangotri temple is situated in the cold valleys. The weather is cold throughout the year. Rainfalls and snowfalls often occur there. Hence, one should wear proper winter clothes with mufflers and gloves. An umbrella is also must to carry.

What are the festivals celebrated at Gangotri Temple?

Some of the festivals celebrated at Gangotri temple are:

How to reach Gangotri Temple?

Where to stay near Gangotri Temple?

Some of the places where one can stay near Gangotri temple are:

What are some temples near Gangotri Temple?

Some of the temples near Gangotri temple are: