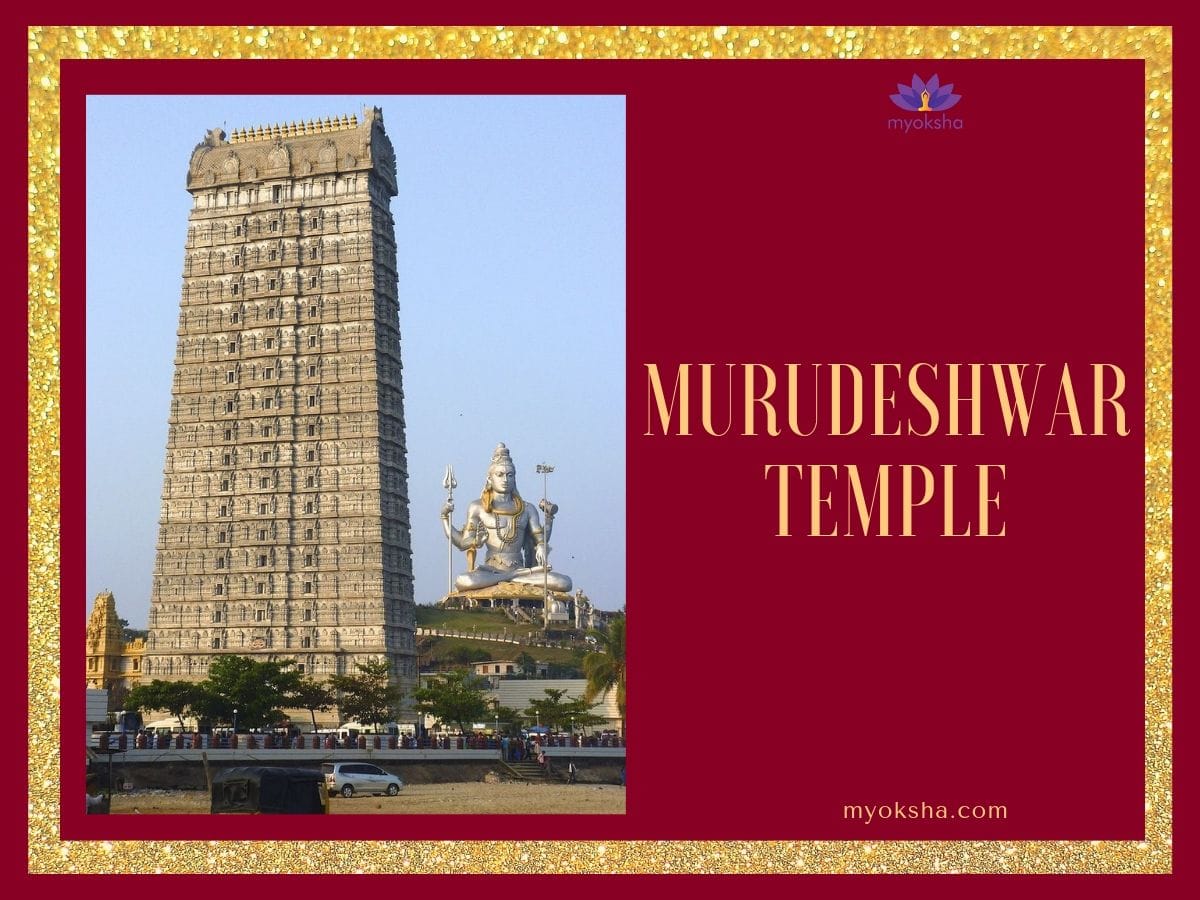 Murudeshwar Temple of Karnataka is one of the Mukti Sthala and boasts the world’s second-largest Shiva statue which commands attention in the blue skyline surrounded by sea.

The land of the temple just protrudes out of the mainland. Hence, the Arabian Sea surrounds the temple on three sides. The Murudeshwar Temple Complex begins with a huge 20-storied Gopuram.

The whole Murudeshwar Temple Complex is modern except the main Sanctum which is still dark and retains the old form. Further, businessman and philanthropist R.N. Shetty constructed the new temple complex.

What are the timings of Murudeshwar Temple?

Here are the timings of Murudeshwar Temple:

Which sevas and poojas take place at Murudeshwar Temple?

The Yearly Sevas at the Murudeshwar Temple are:

What is the significance of Murudeshwar Temple?

However, the Lord gave it to Ravana as a reward for his penance.

The Sri Murudeshwar Temple is one of the five Temples famous in Karnataka as the Pancha Kshetras of Lord Shiva. The other four Temples are in Nanjanagud, Dharmasthala, Dhareshwara, and Gokarna.

The towering Gopuram built at the entrance of the Murudeshwar Temple is the second tallest Gopuram in India at a height of 237.5 feet. The Tallest Gopuram is present at the Sri Ranganathaswamy Temple at Srirangam, Tamilnadu. The unique feature of this Gopuram is that devotees can enter the Gopuram and can go to the top from where they can view the surroundings.

Devotees can perform various Sevas like Abhishekam to the Linga of Lord Rameshwara by themselves.

A Lamp or Deepam is kept inside the main shrine of Lord Murudeshwara, which is said to be burning since the Murudeshwar Temple was built. Devotees also believe that pouring oil into it and then glancing at your image on the oil surface blesses one with luck and prosperity.

What is the history of Murudeshwar Temple?

According to history and legends in the chapters of the epic Ramayana, Kaikesi who was the mother of Ravana was also a devotee of shiva. She used to make Lingas out of the beach sand and pray to them daily. However, every night, the sea washed the Linga. Seeing the distraught mother, Ravana promised to her that he will proceed to Mount Kailash and bring back Lord Shiva’s Atma Linga itself to her.

Ravana went to Mount Kailash and performed severe penance to impress Lord Shiva. He sang his praises in the acclaimed Shiva Tandava Stotram. He chopped one of his ten heads as a gift for Lord Shiva. Eventually, Lord Shiva granted him a wish. Ravana asked for the Atma Linga from Lord Shiva.

Lord Shiva then took out the Atma Linga from his heart and offered it to Ravana but placed a condition that he should not keep the Linga down until he reaches his destination. If he keeps the Linga down, the Linga will become affixed and nothing can separate it. Ravana agreed and started proceeding southwards towards his kingdom. All the other Lords were afraid as they were sure that Ravana will misuse the Atma Linga to create havoc in the world.

Narada approached Lord Ganesha and requested him to interrupt Ravana’s journey. Lord Ganesha was aware of Ravana’s daily rituals especially about the evening bath Ravana would take. With the help of Lord Vishnu, who blotted out the Sun to give an appearance of dusk, Lord Ganesha turned himself into a small boy. Ravana wanted to take a bath but could not put down the idol.

When Lord Shiva learned of this, he visited these five places and worshiped the Lingas there. He declared that these places will be known as the Pancha Kshetras and anyone who worships here will be free from all their sins.

What is the dress code of Murudeshwar Temple?

The Murudeshwar Temple does not impose any particular dress code for entering into the temple complex. However, one must wear decent clothes to the temple.

What are the festivals celebrated at Murudeshwar Temple?

Some of the festivals celebrated at Murudeshwar temple are:

How to reach Murudeshwar Temple?

Here’s how to reach Murudeshwar Temple:

Where to stay near Murudeshwar Temple?

Several options for a stay are available for pilgrims in the town of Murudeshwar as well as in Bhatkal which is 16 km away. The RNS Residency Hotel is just beside the Murudeshwar Temple and offers sea-facing rooms. Amenities like a swimming pool and a gym are also available.

Apart from that, resorts are available a few kilometers away from Murudeshwar. Also, The Naveen Beach Resort and the Kamath Yatri Nivas are the nearest to the temple complex.

Where to eat near Murudeshwar Temple?

One can visit the canteen near the Parking place in front of the Murudeshwar Temple Complex for small meals like Dosas, Vadas, Coffee, and Tea. The town of Murudeshwar is host to a large number of small restaurants that primarily serve authentic South Indian cuisine.

Some temples near Murudeshwar temple are:

Is the Murudeshwar Temple open throughout the year?

Yes, the Murudeshwar Temple is open all 365 days of the year.

The entry to the Murudeshwar Temple is free of cost.

The summers in Murudeshwar starts from April and continue until June. The summers here can be very hot and humid. Temperatures during the daytime often go up to 38 º C.

If you have any questions about The Murudeshwar Temple, please leave a comment below, and we will get back to you within one hour.