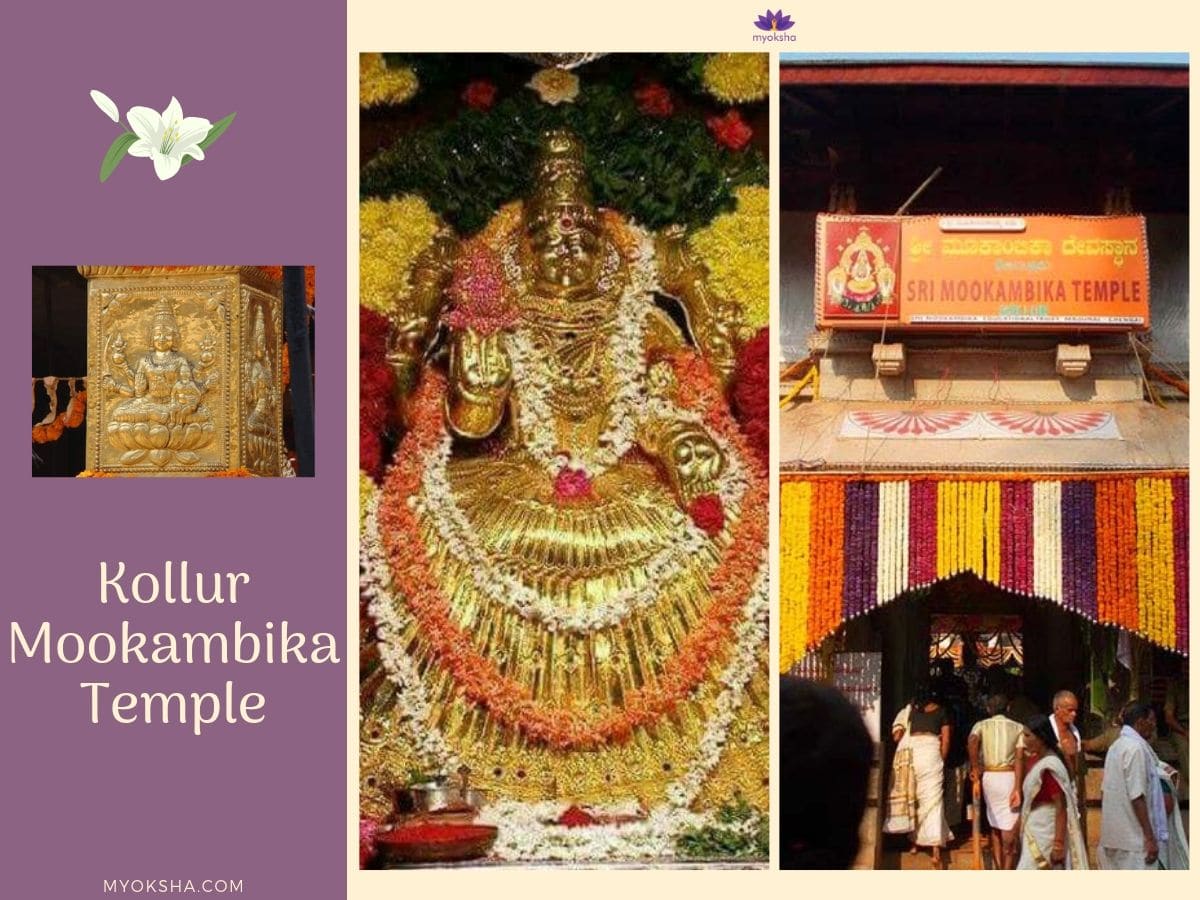 The region of Kollur is among the 7 Mukti Sthalas in Karnataka. The other six are Udupi, Subramanya, Kumbhashi, Kodeshwara, Sankaranarayanan, and Gokarna. These places are together are the Parashurama Kshetras. People also believe that these temples are on the land of Parashurama from the sea.

The official website of the Kollur Mookambika Temple is: http://www.kollurmookambika.org/

What are the timings of the Kollur Mookambika Temple?

Here are the timings of Kollur Mookambika Temple:

What are the poojas and sevas that take place at Kollur Mookambika Temple?

At the Kollur Mookambika Temple, around 64 Sevas and Poojas can be performed dedicated to the Goddess. Listed below are some of the main sevas that one can perform:

The Kashaya Theertham is made of ginger, pepper, cardamom, lavang and jaggery. It is a ritual that is in practice since the time of Sri Adi Shankaracharya who introduced this Theertham as a medicinal drink.

What is the significance of the Kollur Mookambika Temple?

The idol of Goddess Mookambika consists of the material called the Panchaloha element. The Panchaloha is traditionally an alloy of five metals. The composition of the alloy was a secret for several centuries and is often finds mention in the Shilpa Shastras.  Devotees also believe that worshipping idols made of the Panchaloha material imparts balance, self-confidence, health, fortune and peace of mind.

Goddess Mookambika’s idol has three eyes and four arms. She also holds a Sri Chakra in one hand and a conch in the other. On the right side, as an Udbhavalinga, Mookambika integrates with Lord Brahma, Lord Vishnu, and Lord Shiva.

The Kollur Mookambika Temple is one of the seven Mukti Sthalas of Karnataka. The presiding deity is Goddess Mookambika in a unique form of a Swayambhulinga. Devotees also believe that Sri Adi Shankaracharya himself installed the idol of the Goddess. Also, according to beliefs, Sri Mookambika embodies all the Gods of the realm in herself and thus worshipping her is equivalent to worshipping all the Gods at the same time.

People believe that Sri Adi Shankaracharya had a dream during his penance in which Goddess Shakti appeared. He later installed the idol resembling the image of her in the shrine. The Shankara Simhasanam inside the Kollur Mookambika Temple is the place where he meditated and had a vision of the Goddess.

The Annual Ratha Festival lasts for ten days in the month of March – April. During these ten days, the devotees take Goddess Sri Mookambika around the town in different Vahanas or vehicles and worshipped with reverence.

On the first day, they raise the flag, known as the Dhvajarohana.

On the second day, they take the Goddess around the village in a Peacock chariot and perform the Ashtavadana Seva for her in the Saraswati Mandapam.

The Katte Utsava and the Ashtavadhana Seva take place in the evening for the Goddess in the Saraswati Mandapam on the third day.

On the fourth day, the Katte Pooja takes place at the Sri Gopala Krishna Temple. They then take Sri Mookambika to the Saraswati mandapam in a different chariot named Pushparatham.

They then transport the Goddess to the Saraswati Mandapam in the Rishaba Vahana on the fifth day.

On the sixth day, they take the Goddess around the town to the Saraswati Mandapam in the Gaja Vahana.

The eighth day includes the celebration of the Maha Rathotsava, in which devotees take the Goddess in the Brahma Ratham and perform various Poojas for her in the evening.

The Churnotsava (smearing of the Goddess with flowers and gold paste), Okuli (devotees and priests smear themselves with coloured water), and the Teppotsava (taking the Goddess around in a float on the Sowparnika River) occurs on the ninth day.

On the tenth day the lowering of the flag, Poorna Kumbhabhishekam, and the Prasadam distribution also take place.

What is the history of Kollur Mookambika Temple?

Documented evidence in the history of Kollur Mookambika Temple dates back to 1200 years. People also believe that the Great Parashurama himself built the first Kollur Moombika temple. People worship the Linga since the times of the Sage Kola Maharishi and Sri Adi Shankaracharya installed the idol of the Goddess.

The King Halugulla Veera Sangayya constructed the stone walls inside the Kollur Mookambika Temple and created several of the present structures under the orders of Rani Chennamaji.

Many have contributed graciously to the development of the Temple. The legendary Rani Chennamma offered precious emerald jewellery to the Goddess which she still adorns. The Vijayanagara Empire King Krishnadevaraya presented a Gold Mask which is kept as a Temple treasure. King Chennamaji presented a Gold face for the Lingam. The Late MG Ramachandran, CM of Tamilnadu presented a Silversword to the Goddess.

The legend of Kollur Mookambika Temple

Story of the origins of the Kollur Mookambika Temple and the importance of the region of Kollur are mentioned in the Skanda Puranam. The legend begins with the Tapas or Penance of Sage Kola Maharishi. At the same time, a demon by the name of Kaumasura was also doing penance for Lord Shiva. He wanted immortality and great strength as a boon from Lord Shiva.

The Gods were aware that if he achieves his boon, he will unleash a reign of terror on Earth. Therefore, when Lord Shiva appeared before him, Goddess Parvati made him dumb or Mooka. As a result, he was unable to ask for a boon and came to be known as the Mookasura. The event enraged him and he started disrupting the penance of Kola Maharishi. The Sage then requested the help of the Goddess in annihilating the demon.

So, She appeared in an integrated form imbibing the powers of the Trimurti as well as of the other Goddesses Lakshmi and Saraswati. Then She killed Mookasura and hence became famous as Goddess Mookambika. And on the request of Kola Maharishi, she stayed at the place in her divine integrated form.

As per one legend associated with Sri Adi Shankaracharya, one day he was unable to stand up after his meditation. According to beliefs, Goddess Mookambika himself prepared a medicine for him with a combination of herbs from the Kodachadri hills nearby. Sri Adi Shankaracharya recovered and eventually introduced the custom of preparing the Kashayam Theertham for the visiting pilgrims so that they attain good health.

The mythology associated with River Sowparnika, the perennial river that flows beside the Kollur Mookambika Temple is also worth learning. People also believe that a Garuda named Suparna prayed on the banks of the river to relieve his mother of all the sufferings and bad luck. The Kollur Mookambika Devi appeared before him and granted his wishes. Hence, the River became famous as the name of the Garuda (Sowparnika). This river contains rich extracts of herbals as it passes through the Kodachadri hills.

The tower of the Sanctum has a covering of gold. Besides the main shrine, several other shrines for Lord Subramanya, Dashabhuja Ganapathi, Anjaneya, Chandramouleeshwara, and Gopalakrishna are also there. Behind the Swayambhu Linga of Goddess Mookambika, an idol of the Goddess is there. The idol of Goddess Mookambika has three eyes and four arms. She also holds a Sri Chakra in one hand and a conch in the other.

What is the dress code of Kollur Mookambika Temple?

The Kollur Mookambika Temple administration requests the male devotees to remove their shirts and vests before entering the temple premises. Clothes such as Coats, Hats, Turbans, Bermuda, and Shorts, and Lungi are not allowed inside the temple. Women are requested to dress decently.

Women who have delivered a newborn should not enter the Temple for the first eleven days after the birth. Pregnant women are not allowed inside the temple after 7 months.

What are the festivals celebrated at Kollur Mookambika?

Some of the festivals celebrated at Kollur Mookambika Temple are:

How to reach Kollur Mookambika Temple?

The Kollur Mookambika Temple administration has constructed a few Guest Houses which provide a wide range of rooms that can be booked as per the devotee’s needs. Non – Deluxe rooms, deluxe rooms, air-Conditioned rooms, and dormitories are also available for rent at a nominal rate.

Apart from the Guesthouses run by the Kollur Mookambika Temple Administration, several private hotels and lodges are also available for accommodation. Some of the popular options are the Bhagirathi Tourist Home, Kairala Residency, and the Mookambika Palace.

The Kollur Mookambika Temple administration provides free meals in the temple premises at 12 PM and at 8 PM to all pilgrims who wish to eat. Besides that, a number of small vegetarian restaurants are available outside the temple complex. The cuisine is mostly South Indian.

What are some of the temples near Kollur?

Some of the temples near Kollur Mookambika Temple are:

Is the Kollur Mookambika Temple open throughout the year?

Yes, the Kollur Mookambika Temple is open all 365 days of the year.

The entry to the Kollur Mookambika Temple is free of cost.

The summers in Kollur starts from April and continue until June. The summers here can be very hot and dry. Temperatures during the daytime often go up to 45 º C.

In Kollur, winters start in October and continue until March. The temperatures during this time range from around 20 º C to 28 º C. The weather during this time is slightly warm but pleasant.

If you have any questions about The Kollur Mookambika Temple, please leave a comment below, and we will get back to you within one hour.