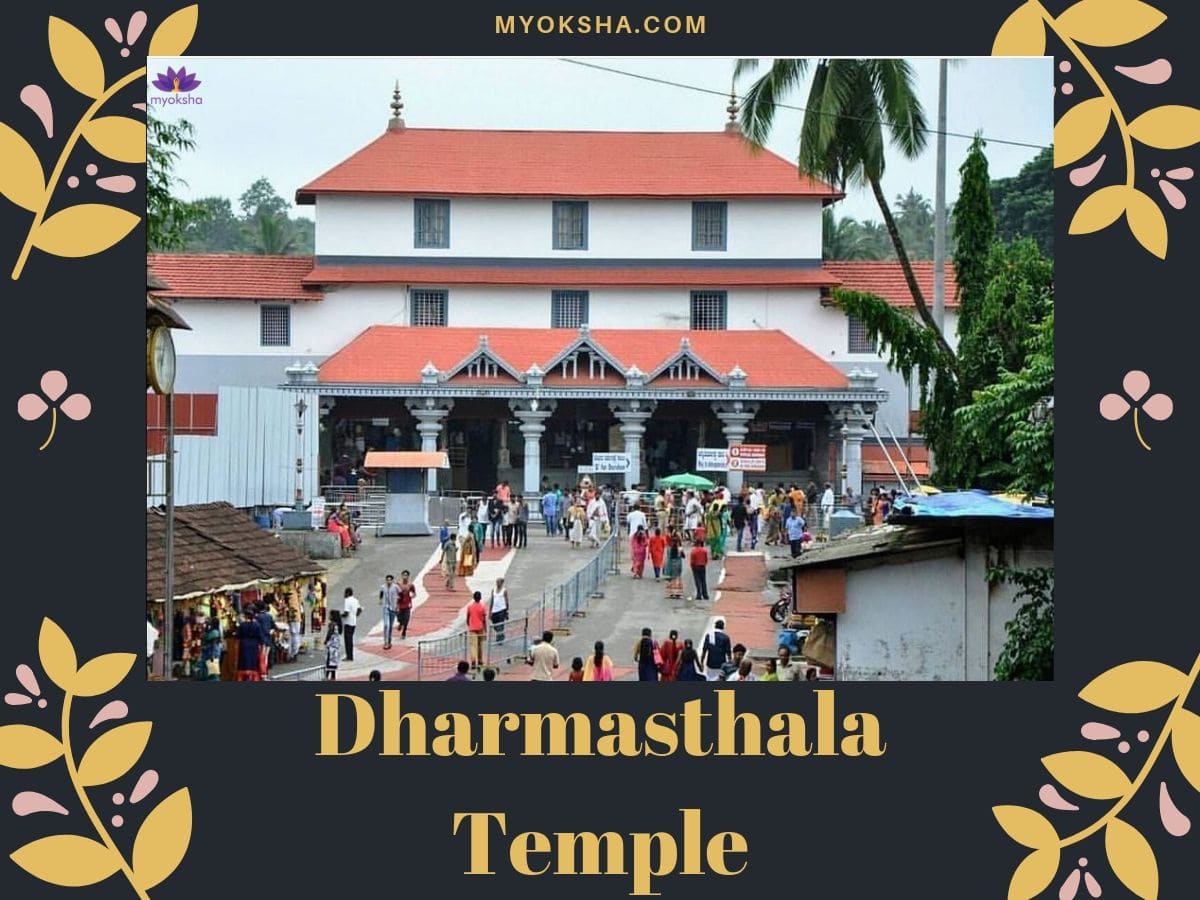 Dharmasthala Temple of Sri Manjunathaswamy is located on the banks of the River Nethravathi in the town of Dharmasthala in the Dakshina Kannada district of Karnataka. The deities worshiped here are Sri Manjunatha (Lord Shiva) and Ammavaru (Goddess Parvati) along with Jain Tirthankara Chandraprabha and Jain protection Gods, Kalarahu, Kalarkayi, Kumarasvami, and Kanyakumari.

The Dharmasthala Temple has presiding deities belonging to both the Hindu and the Jain community.  The word “Dharmasthala” means “the place where the truth or righteousness resides (Dharma meaning the truth and Sthala meaning the place of stay)”. Hence, the place signifies the abode of “Dharma” or truth & justice.

The Dharmasthala Temple is one of the five temples famous in Karnataka as the Pancha Kshetras of Lord Shiva. The other four temples are in Nanjanagud, Sri Murudeshwar, Dhareshwara, and Gokarna.

The priests are Hindus and follow Vaishnavism and the Jain Bunt family (the Pergades) run the temple administration.

What are the timings of Dharmasthala Temple?

The temple opens at 6:15 AM in the morning and closes at 8:30 PM in the evening. The temple also performs various rituals during this time. The devotees can be a part of these rituals such as the afternoon and evening aarti.

The timings of Dharmasthala Temple are as follows:

Dharmasthala Temple serves very hygienic food for free and is a must-have. The timings are from 12:00 PM to 2:00 PM.

Which sevas and poojas take place at Dharmasthala Temple?

One can also obtain the Theertha bottle and Sri Prasada from the Seva counter at Dharmasthala Temple.

Besides the above sevas to the God and Goddess, special Sevas also take place which are:

What is the significance of Dharmasthala Temple?

The significance of Dharmasthala Temple is that it is an epitome of religious tolerance and charity. The temple complex houses a Jain shrine for Sri Chandraprabha Swamy and a Hindu shrine for Lord Shiva. Also, Dharmasthala Temple priests belong to Vaishnavite sects (who treat Lord Vishnu as the supreme God).

The Heggade who is the authority of the Dharmasthala Temple administration performs a kind of judicial function also. Devotees also believe that Lord of Dharma resides at the temple and that justice will prevail here. Civil complaints called Hoyulus are settled here between the parties involved after they present their cases to the Heggade. The decision given by the Heggade on the Hoyulus is accepted by the civil courts of the country.

The Dharmasthala Temple is famous for the Chaturdanas in Karnataka. Chaturdanas means “Four types of charities”. The four types of charities that take place in the temple are Anna Danam, Abhaya Danam, Aushadh Danam, and the Vidya Danam. The Anna Danam scheme involves providing free food to all the pilgrims visiting the temple. Another scheme involves the Heggade offering his advice to people who queue to meet him in matters of general life.

The temple administration runs several hospitals and health care centers and offers free medical aid to the needy. This is under the scheme of Aushadh Danam. Under the Vidya Danam, the trust has constructed several non-profit educational institutions that provide good quality education to the underprivileged class of the society.

The Annaprasadam at the Annapoorna Choultry is one of the mega kitchens in the world, found a mention in the National Geographic as one of the most efficient and resourceful kitchens in India. The kitchen can serve 30,000 to 70,000 pilgrims every day. Moreover, the kitchen modern. The wastage is disposed of in an eco-friendly manner.

The statue is naked in appearance symbolizing complete victory over earthly desires and ascent towards divinity.

What is the history of Dharmasthala Temple?

According to history, 8000 years ago, the town of Dharmasthala was popular as Kuduma. A Jain chieftain by the name of Birmanna Pergade lived there with his wife Ammu Ballathi.  Nelliadi Beedu was the name of their home. The couple was famous for their generosity and simple life in the community.

Hearing the public talk, the four guardian angels of Dharma arrived at their home in search of a place where they could propagate the philosophy of Dharma. Hence, the Pergade couple received them in their human forms with great respect and sincerity. The angels were very happy with the hospitality of the couple.

At night, the Lord Dharma visited the couple in their dreams and asked the couple to vacate the house for the worship of the Daivas (Gods) and dedicate their lives to propagate Dharma. The Pergades then left the house and started worshiping the Dharma Gods. The Dharma Daivas appeared once more and communicated to the Pergades that they have to build separate shrines for the four Dharma Daivas – Kalaharu, Kalarkai, Kumaraswami, and Kanyakumari.

He also needed to choose two persons of Noble birth to act as an oracle for the Daivas and four persons for helping the Pergades in administration.  The Daivas, in turn, promised the Pergade family protection from all evils, abundance in funds and fame.

As instructed, Shri Pergade built the four shrines and invited the Brahmin priests to perform the rituals. On the request of the Brahmins, he sent Annappa Swamy, to procure the idol of Shri Manjunathaswamy from Kadri. Later, a shrine was built making Dharmasthala as Lord Manjunathaswamy’s abode.

In the 16th century by Shri Vadiraja Swamy of Udupi performed the consecration ceremony of the Linga by following the holy Vedic rites.

The Pergades and their future generations maintain absolute selflessness to date and are famous for their simplicity and charity. The successive Pergade family’s eldest male member assumes the responsibility of the Dharmasthala Temple and his title is Dharma Adhikari and Heggade. The current Heggade, Shri Veerendra Heggade belongs to the 21st generation of the Jain family.

What is the dress code for Dharmasthala Temple?

The Dharmasthala Temple administration has a strict dress code for both women and women and if not followed, they are disallowed from entering the temple premises. Men are required to remove their shirts and vests before entering the Sanctum. Bermuda half-pants, nighties, and miniskirts are not allowed.

Please note: Children below 2 years of age are not allowed to enter the Sanctum.

Which festivals are celebrated at Dharmasthala Temple?

Some of the festivals celebrated at the Dharmsthala temple are:

How to reach Dharmasthala Temple?

Here’s how to reach Dharmsthala Temple:

Here’s how to reach from Bangalore to Dharmasthala:

Where to stay in Dharmasthala?

Where to eat in Dharmasthala?

The Annaprasadam offered free of cost to all the visiting devotees is a must-have for any visitor who wishes to eat at the temple. The meal consists of three courses and is served in a very hygienic manner. Several small vegetarian hotels are there around the Dharmasthala Temple Complex.

The cuisine is mainly South Indian but certain restaurants do serve North Indian and Chinese dishes as well.

Some of the temples near Dharmsthala temple are:

Some other famous temples located in Karnataka are:

Is the Dharmasthala Temple open throughout the year?

Yes, the Dharmasthala Temple is open all 365 days of the year.

The entry to the Dharmasthala Temple is free of cost.

The summers in Dharmasthala starts from April and continue until June. The summers here can be very hot and humid. Temperatures during the daytime often go up to 42 º C.

If you have any questions about the Dharmasthala Temple, please leave your comment below and we will get back to you within one hour.