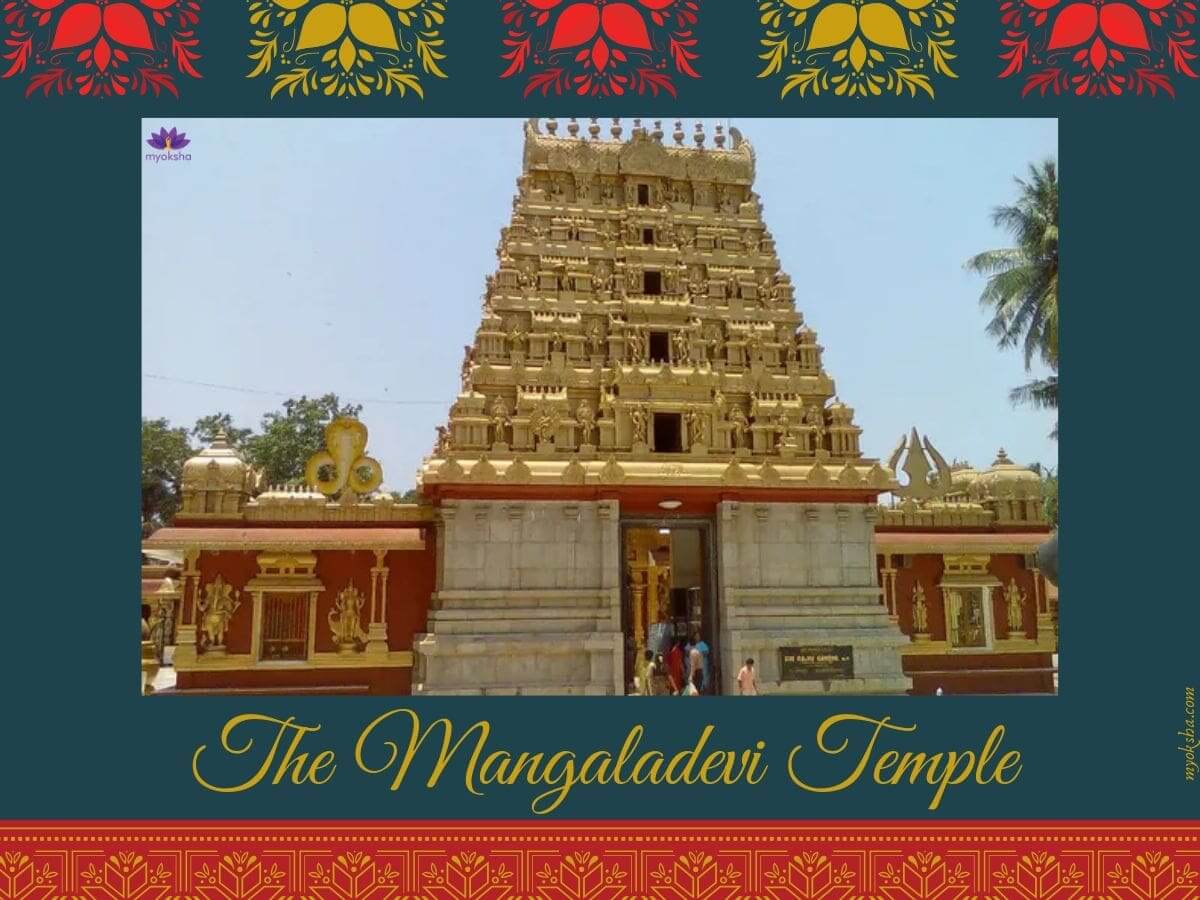 Mangaladevi Temple, dedicated to Goddess Adi Parashakti is in Mangalore, Karnataka. The city has its name after Mangalapura and eventually became famous as Mangalore or Mangaluru. People believe that worshipping Goddess Mangaladevi will grant you success and prosperity in any new ventures and will protect one against evil influences.

What are the timings of Mangaladevi Temple?

Here are the darshan timings of the Mangaladevi Temple:

There are several poojas that take place during the given darshan timings. Devotees can participate in these poojas during the timings mentioned below.

What are the poojas and sevas performed at Mangaladevi Temple?

A devotee can perform around 42 types of Poojas and Sevas in the Mangaladevi Temple Mangalore.

Wedding ceremonies also take place at the Mangaladevi Temple Mangalore Hall. For bookings check the official website of the temple, given below.

Some other Poojas include:

What is the significance of the Mangaladevi Temple?

The Mangaladevi Temple’s historical importance resulted in the naming of the place itself as Mangalapura. In present times, the city of Mangalore gets its name from the Goddess of Mangalapura or Mangalore.

Mangaladhara Vrata is a unique ritualistic fast observed by the devotees of Goddess Mangaladevi. This Vrata is kept by maidens to find a suitable match for marriage for them. This Vrata is also called Swayamvara Parvathi.

What is the history of Mangaladevi Temple?

As per the history of Mangaladevi Temple, the origin of the Mangaladevi Temple runs back to a demon Vikhasini who was Hiranyakashyapu’s daughter. She waged a war against the Devaloka and Lord Indra. Though the demon army was strong, Indra defeated them in a fierce battle.

Hence, it shattered Vikhasini’s ambition of commanding the Devaloka and she realized that she needed God’s grace to enhance her powers.

She wanted a son with the Gods who would be highly powerful and competent enough to avenge Lord Vishnu and destroy him as revenge for Vikhasini’s father’s death. So She performed severe penance and gained the attention of Lord Brahma. Eventually, He asked her to wish for a boon. She wished for a son who would slay Lord Vishnu. Lord Brahma refused to state that the holy trinity is immortal. However, he said that she will attain a son from Lord Shiva who will be brave and invincible.

Narada and Lord Brahma visited Kailash and warned Lord Shiva of future developments. Lord Shiva along with Parvati, Lord Brahma, Narada, and Goddess Saraswati went to Vaikuntam and expressed their anger in front of Lord Vishnu. Lord Vishnu however, calmed them by saying that everything will be rectified when the time comes.

Vikhasini disguised herself as Goddess Parvati and lured Lord Shiva into submission. After the act, she left for her kingdom and during the journey; she feared that the Devatas will harm her son. She asked Bhoodevi (Goddess Earth) and with her permission, buried her fetus inside the Earth. Eventually, as time passed, a great demon was born and was named Andasura by Vikhasini. She told Andasura about the fate of Hiranyakashyapa and asked him to seek revenge by killing Lord Vishnu.

He attacked the Devaloka and destroyed anything that came in his path.  Then the holy trinity gathered and asked the Supreme mother, Adi Parashakti for help. She agreed to help her children and asked them for their weapons. So Lord Brahma gave his Danda, Lord Vishnu gave his Chakra and Lord Shiva gave his Trident to Goddess Adi Parashakti. She merged Lord Shiva’s power of destruction with her and acquired his third eye.

Meanwhile, Andasura roamed through the Devaloka in search of Lord Vishnu. Narada directed him to a place where Goddess Parashakti, disguised as a beautiful and captivating maiden was waiting for him. Seeing her, the demon came close to her and misbehaved. At an opportunistic moment, Goddess Adi Parashakti slew him with the trident.

She also addressed his children from the spot that in the Treta Yuga, “Lord Vishnu will incarnate as Parashurama and slay the 21 generations of evil Kshatriyas. He will retrieve the land from Lord Varuna and the spot where he will do penance will be where I killed Andasura. He will build a shrine with a Linga and a Dharapatra”.

After several centuries, the legend continues through Veerabahu, the king of Tulunadu. He did not have any son so he made Bangaraja as his successor. Bangaraja ruled his kingdom well and brought immense prosperity to the region. Goddess Mangaladevi appeared in his dreams and informed him that the shrine’s remains are there under a mound where the Nethravati and the Phalguni rivers intersect.

Bangaraja along with Saint Bharadhwaja rediscovered the shrine and constructed a small temple around it. However, nature took its course hid the temple amid abundant vegetation of the surrounding forests.

What is the architecture of the Mangaladevi Temple?

The Mangaladevi Temple architecture resembles a Kerala style of construction. Huge stones form the walls of the temple. Intricate carvings are also there on the inner walls of the Mandapam. The Gopuram has two stories. The area within the rectangular walls around the Temple is Kshetra – Madiluka. All the shrines are present inside this Kshetra.

The Dhwajasthambam is directly in front of the main entrance. A Deepasthamba is inside the temple complex with figures of the 8 Dwarapalikas around it. The Mangaladevi Temple also has a clean complex with all the modern facilities available to the pilgrims.

What is the dress code at Mangaladevi Temple?

The Mangaladevi Temple administration has not imposed any strict dress code. However, it is recommended to wear decent clothes in the temple premises. Shorts, miniskirts, and beachwear are to be avoided.

What are the festivals celebrated at Mangaladevi Temple?

Some of the festivals celebrated at Mangaladevi Temple are:

Besides these festivals, Ugadi, Mahashivaratri, and Ganesh Chaturthi are also important festivals in the Mangaladevi Temple Mangalore.

How to reach the Mangaladevi Temple?

Here’s how to reach Mangaladevi Temple:

Where to stay near Mangaladevi Temple?

A large number of private hotels are available for accommodating pilgrims and tourists alike. The rooms may range from standard to AC suites in five-star hotels. A large number of Government offices also operate guest houses in the city which one can contact and book.

Where to eat near Mangaladevi Temple?

What are some of the temples near Mangaladevi Temple?

Some of the temples near Mangaladevi Temple are:

Is the Mangaladevi Temple open throughout the year?

Yes, the Mangaladevi Temple is open all 365 days of the year.

The entry to the Mangaladevi Temple is free of cost.

The summers in Mangalore starts from April and continue until June. The summers here can be very hot and humid. Temperatures during the daytime often go up to 42 º C.

If you have any questions about the Mangaladevi Temple, please leave your comment below and we will get back to you within one hour.