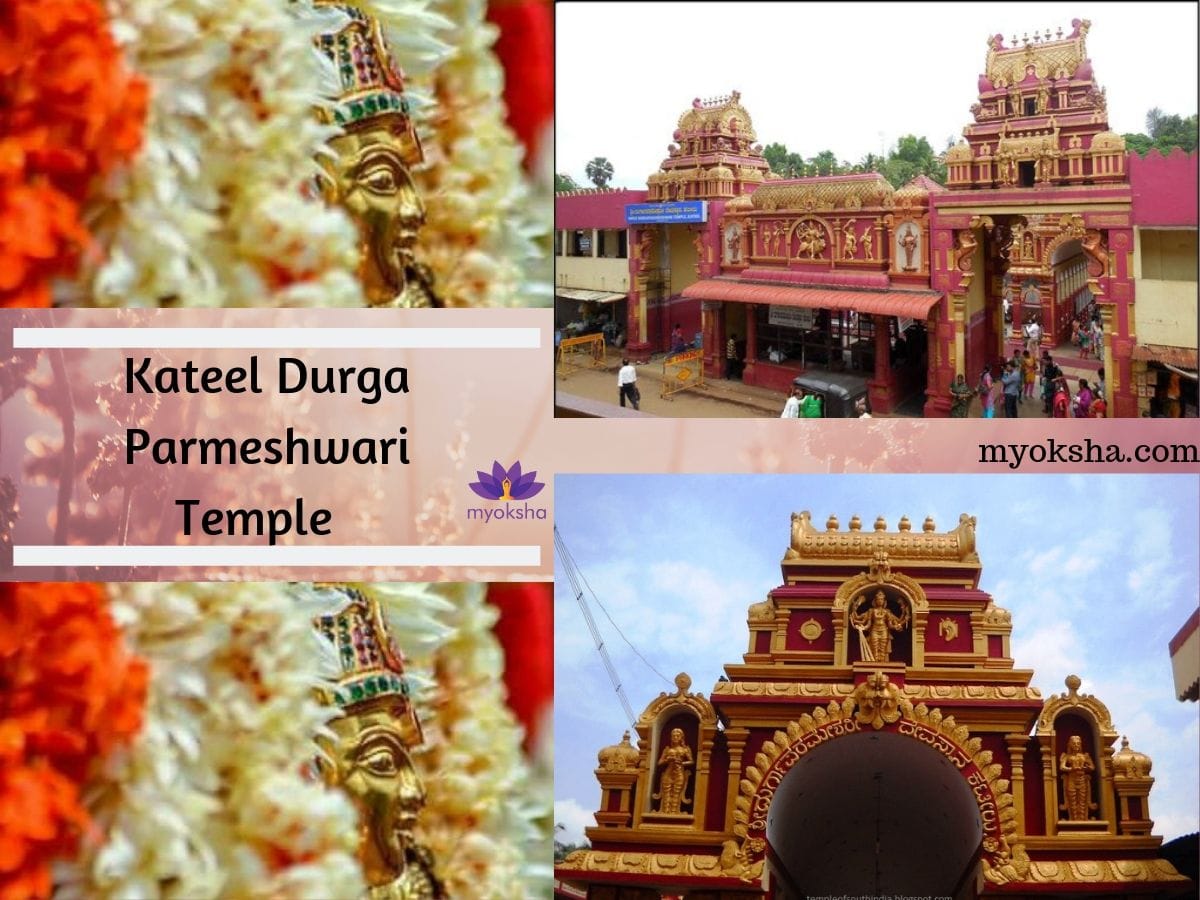 Kateel Durga Parameshwari Temple is an ancient temple dedicated to Goddess Shakti located in Kateel, Karnataka. The Temple is situated on an islet formed naturally in the middle of the river Nandini. The town of Kateel lies 29 km from Mangalore city center and is considered as one of the holiest temple towns in India.

The Kateel Durga Parameshwari Temple administration is also dedicated to charity as it provides free Annadanam and other aids free of cost to the weaker sections of the society.

The timings for Kateel Durga Parameshwari Temple are:

The Kateel Durga Parameshwari Temple remains open until midnight on special occasions like Navarathri and other important festival days.

All the online Sevas will be charged with 1.55% additional Processing charges and Service tax. Also the final net amount is rounded to Rupees.

The Yakshagana dance is performed by the devotees on every special day throughout the year. The devotees genuinely believe that Goddess Durga reveals a part of herself during the performance.

The History and Legends attached with Kateel Durga Parameshwari Temple

The legend behind the origin of the Kateel Durga Parameshwari Temple is mentioned in sources like Markandeya Purana. The Sahyadrikanda of the Skanda Purana also relates to the legends. Sri Nirjararanya Mahatmayam and in Devi Bhagavatha Mahatmayam are two more sources for the legends related to the temple.

The legend begins with the battle between Goddess Shakti and demons Shumbha and Nishumbha. Both were eventually killed in the battle. However, Arunasura, their minister fled the battle and gathered all the remaining demons. He became their king and started disturbing the sages and munis by disturbing the Yagnas. The Gods learned of this and stopped the rains.

Seeing the situation worsening, Maharishi Jabali visited Lord Brahma and requested him to send Kamadhenu (a holy cow) for completing a ritual. Lord Brahma replied that since Kamadhenu was unavailable, Nandini her daughter would come for the ritual. However, Nandini refused and insulted the Maharishi. The Maharishi became angry and cursed her that she will flow as a river on the Earth’s surface.

Nandini was mortified and prayed to Sri Adi Parashakti. The Goddess said that she could not lift the curse, but she will take birth from Nandini and relieve her from the curse in due course of time. Satisfied, Nandini descended on Earth and started flowing from the Kanakachala mountain.

Meanwhile, Arunasura started strict penance and obtained a boon from Lord Brahma. He wished that he will not be killed by any God, demon, reptile, Yaksha, Gandharva, Kinnara, Kimpurusha, Siddha, Sadhya, Vidhyadhara, man, woman, by any weapons or by animals on two and four feet.

Lord Brahma granted him the boon. He asked for a boon from Goddess Saraswati who blessed him by saying that as long as he chants the Gayathri Mantra every day, Death will not touch him.

Boosted by the boons, he created a huge army and started terrorizing people. He even defeated Indra and subjugated him. Lord Indra went to the trinity for help. Lord Brahma, Vishnu, and Shiva requested the help of the Supreme Mother Sri Adi Parashakti. She agreed to help but said that Arunasura had to be converted into an atheist.

Brihaspathi, disguised as a Brahmin met Arunasura and after a long debate, convinced him of the futility of his belief in reciting the Gayathri Mantra. He convinced Arunasura that he was the supreme being and should be worshiped above all Gods and Goddesses. Arunasura eventually became a tyrant.

Sri Adi Parashakti disguised herself as a beautiful and seductive Mohini and appeared in the gardens of Arunasura’s kingdom. He was informed by his ministers of the beautiful damsel in the Gardens. Arunasura reached the garden and was captivated by her beauty. He proposed her but she refused.

After trying to persuade her repeatedly, she went inside a rock. Arunasura broke the rock and out came a swarm of bees that stung him all over the body. The Goddess took the form of a big and furious bee named “Bhramara” and repeatedly attacked him until he died.

Maharishi Jabali along with other Gods offered the furious form of the Goddess with tender coconut and calmed her down. Maharishi Jabali, Indra, Nandini, and other Gods requested her to make the place as her abode. Sri Adi Parashakti appeared as a Linga in the middle of the river Nandini.

The town of Kateel gets its name from the words ‘Kati‘ meaning the middle of the center and ‘La‘ meaning the place. Thus, the word Kateela means “The place in the center” referring to the center of the River Nandini which originates in the Kanakachala mountain and flows till Pravanje where it integrates into the sea.

This is the Raktheshwari form of the Goddess from where she came out as a Bee to kill the demon Arunasura. The rock is worshiped three times a day and devotees offer tender coconuts to the rock as a symbol of their affection for the Goddess.

Besides the above festivals, several other important days are observed by the Temple administration like Rashi Pooja, Dhanu Pooja, Bhajana Mangalothsava, and Naga Panchami.

The Kateel Durga Parameshwari Temple administration has constructed three lodges to accommodate the devotees. These lodges provide the basic facilities like AC, Parking facilities and 24 hours power supply. The names of the lodges are Nandini Lodge, Bhramari Lodge, and Durgaprasad Lodge.

Apart from the staying options provided by the Kateel Durga Parameshwari Temple, several private lodges are available for booking. Some of the popular ones are Laxminarayana Mandira and the Gopalkrishna Sabha Bhavana.

For the Theerthasnana, the Temple administration makes special provisions for the devotee and has to be informed in advance.

Where to eat near Kateel Durga Parmeshwari Temple –

Apart from the Annadana, there are a few small hotels located near the Temple complex that serves good quality food. A variety of cuisines ranging from simple South Indian, North Indian, Chinese and Italian are served at the Hotels here.

What are the Temples nearby Kateel Durga Parmeshwari –

Besides these Temples, the city of Mangalore is just 27 kms away. Several religious centers and historic temples are home to the city like Sri Mangaladevi Temple etc.

How much distance is Kateel Durga Parmeshwari from Mangalore city?

Kateel or Kateelu is a temple town in the Dakshina Kannada district of Karnataka, India. It is about 26 kilometers away from Mangalore.

Where is the temple of Kateel Durga Parmeshwari situated?

What are the noted festivals celebrated in Kateel Durga Parmeshwari Temple?

Is there any online portal available for Sevas and Rituals in Kateel Durga Parmeshwari Temple?

You can perform Poojas/Sevas using Credit Card, Debit Card, or online Bank Accounts through secured internet payment to the trust.

Yes, through advance booking with the temple trust, one can book Private marriage halls in Kateel Durga Parmeshwari Temple.

Is there any restriction on female devotees before entering the temple?

Where should devotees contact for specific information about the temple?

Devotees can get more or specific information from the administrator, Hereditary Trustee or Temple Manager.

Are there any facilities available for the disabled and senior citizen Devotees?