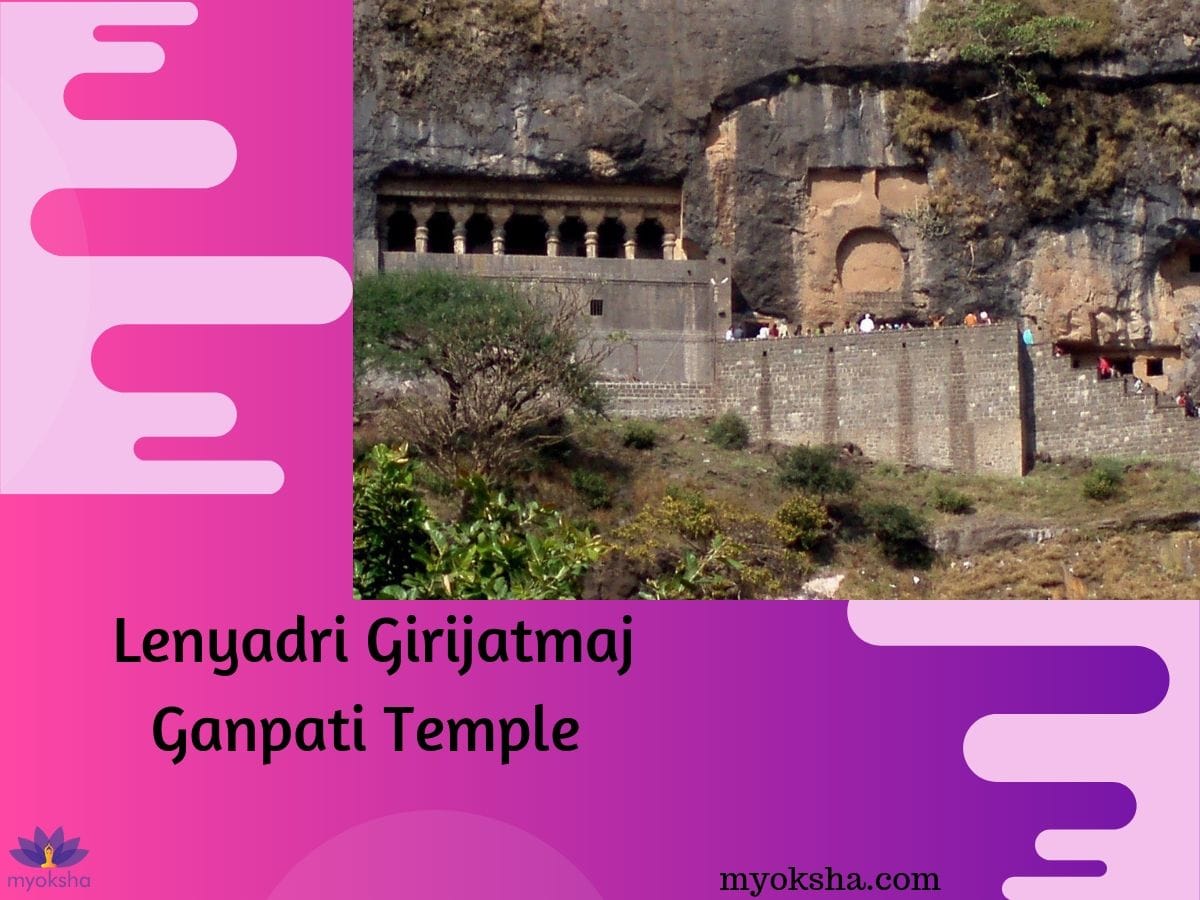 Lenyadri Ganpati Temple is dedicated to Lord Ganesha. It is one of the eight Ashtavinayak Temples in Maharashtra. The temple is also known as Girijatmaj temple. It gets its name from the words Girija (Parvathi) and Atmaj (son), thus the son of Parvati. This is the only Ashtavinayak temple which is on a mountain.

Planning to visit this temple? Have look at our Ashtavinayaka Yatra Tour Packages.

Virtuous deeds like Abhishek, Pooja, Sahastravartan etc. are done by temple trust on behalf of devotees. Since the Ganesh idol is attached to the wall one can not circumnavigate Girijatmaj.

What is the significance of Lenyadri Ganpati Temple?

The significance of Lenyadri Ganapati Temple is that amidst a cluster of rock-cut Buddhist caves. It is one of the Ashtavinayak temples. Devotees believe that Lord Girijatmaj was Lord Ganesh’s manifestation as an infant Lord. Rather, it is carved on a rock, with its head turned to the left.

According to Ganesh Puran, this place is also known as Jirnapur or Lekhan Parbat. Moreover, Devotees believe that the Pandavas carved the caves during their exile period. Lenyadri Ganpati temple is south-facing and monolithic – carved out from a single rock.

Lenyadri is silent and a lonely place. Silence loving people can come here and meditate and have Girijatmaj’s blessings.

The history of Lenyadri Ganapati temple relates to the following Legend:

Legend of Girijatmaj: According to Ganesh Puran, Goddess Sati reincarnated as Parvati and wished to give birth to Ganesh. She did severe penance on the Lenyadri mountain. On the fourth day of Bhadrapad Shuddh or Chaturthi day, Goddess Parvati wiped her body and used the dirt to create an idol.

Lord Gajanan entered this idol and stood before her a young boy with six arms and three eyes.  His name was Girijatmaj or the son of Parvati.  This incarnation of Lord Ganesh – Lord Girijatmaj is believed to have stayed at Lenyadri for nearly 15 years.

Though the caves on Lenyadri are under control of Archeological Dept. of India, adminstration of Ganesh temple is looked after by Temple Trust.

The architecture of Lenyadri Ganpati Temple –

The caverns date from between the first and third century AD. the Ganesha sanctum arranged in Cave 7 is dated to the first century AD. However, the date of transformation to a Hindu holy place is obscure. The majority of the caverns emerge from Hinayana Buddhism.

It is basically a Buddhist Vihara in structure, an unpillared lobby with 20 cells with shifting measurements. The lobby is huge and can be entered by a focal entryway, under a pillared veranda. The hall is now a sabha-mandapa of the Ganesha temple. 283 steps were built in stone brickwork which will lead to the passageway.

The corridor additionally has hints of mortar and artistic creations, both included during the transformation and renewed in later occasions – perhaps as late as the nineteenth century. The artistic creations portrayed Ganesha’s youth, marriage arrangements, fight with evil spirits, etc.

Before the gigantic section doors of Shri Girijatmaj Ganpati temple are colossal columns with pictures of elephants, horses, lions and different creatures cut on them. Also, there are columns with various carvings before each other cavern.

The neighboring sixth cavern and fourteenth cavern have Buddha-columns in them normally known as Bouddha-Stupa. These caverns are made into the state of the side of the equator interiorly. That is the reason, echoes can be effectively heard.

The Sanctorum of the temple hotshots a wide scope of bewildering workmanship as reverential artistic creations of Shri Guru Dattatray. Lord Ganesh laying on Shiv-Parvati’s lap, Bal Ganesh playing an ancient game like ludo made by utilizing regular hues.

There is no power to illuminate in the temple. The temple is developed with the end goal that during the day it is constantly illuminated by the sun-beams.

Ganesh Jayanti and Ganesha Chaturthi are celebrated in a great manner with cultural programs. Bullock cart racing is also organized on this occasion.

Which festivals are celebrated at Lenyadri Ganpati Temple?

Some of the festivals celebrated at Lenyadri Ganapati Temple are:

How to reach the Lenyadri Ganpati Temple?

Where to stay near Lenyadri Ganpati Temple?

Temple trust has built Yatri-Niwas for lodging purpose of devotees. At a time arrangement of 300 devotees can be done. Rs.200 are charged for a room having the capacity of 10 people.

Lenyadri is name of Temple Trust and it comes in Golegaon. Main crops of this area are Grapes, Tomato, Cacumber and Sugarcane. A very good season for going to Lenyadri is from Diwali to May.

Where to eat near Lenyadri Ganpati Temple

There are no restaurants at Lenyadri except for the Yatri Niwas which offers food options. However, devotees may opt to eat at the smaller restaurants on the highway or at Junnar.

What are some of the temples and sightseeing places near Lenyadri Ganpati Temple?

Here are some temples near Lenyadri Ganapati Temple:

Lenyadri Buddhist caves: Girijatmaj Temple is amidst a collection of 30 manmade rock-cut caves. These caves have functioned as Buddhist Monasteries from Lord Buddha’s time. Moreover, the seventh cave is the Girijatmaj Temple. However, other caves were either chapels or living spaces for the monks.

Bhima Gada: Adjacent to the Lenyadri Ganpati Temple, cave no. 6 houses a Buddhist stupa. This is popular as Bhima’s Gada. This stupa has good acoustics that allows sounds to echo.

Other Ashtavinayak temples are:

Is there online booking available for Lenyadri Ganpati Temple?

What is the nearest airport to Lenyadri Ganpati Temple?

The nearest airports are in Pune at a distance of 95 km.

What is the temperature in Lenyadri Ganpati Temple?

What is the significance of Lenyadri Ganpati Temple, among the Ashtavinayak Yatra?

The Lenyadri Ganpati Temple comes in 6th number during the Ashtavinayak Yatra.

When are the celebrations celebrated during Lenyadri Ganpati Temple?

The Bhadrapad and Magh Chaturthi are times when big celebrations are held in the temple. In the month of Magh, an Akhand Harinaam Saptah is also held.

Where do devotees pray in the Lenyadri Ganpati Temple?

What are the sightseeing places near Lenyadri Ganpati Temple?

There is a small garden, namely Sunder Udyan near Bhakta-Niwas. Fort Shivneri, where Chhatrapati Shivaji Maharaj was born is at a distance of 5-6 km’s from Lenyadri.