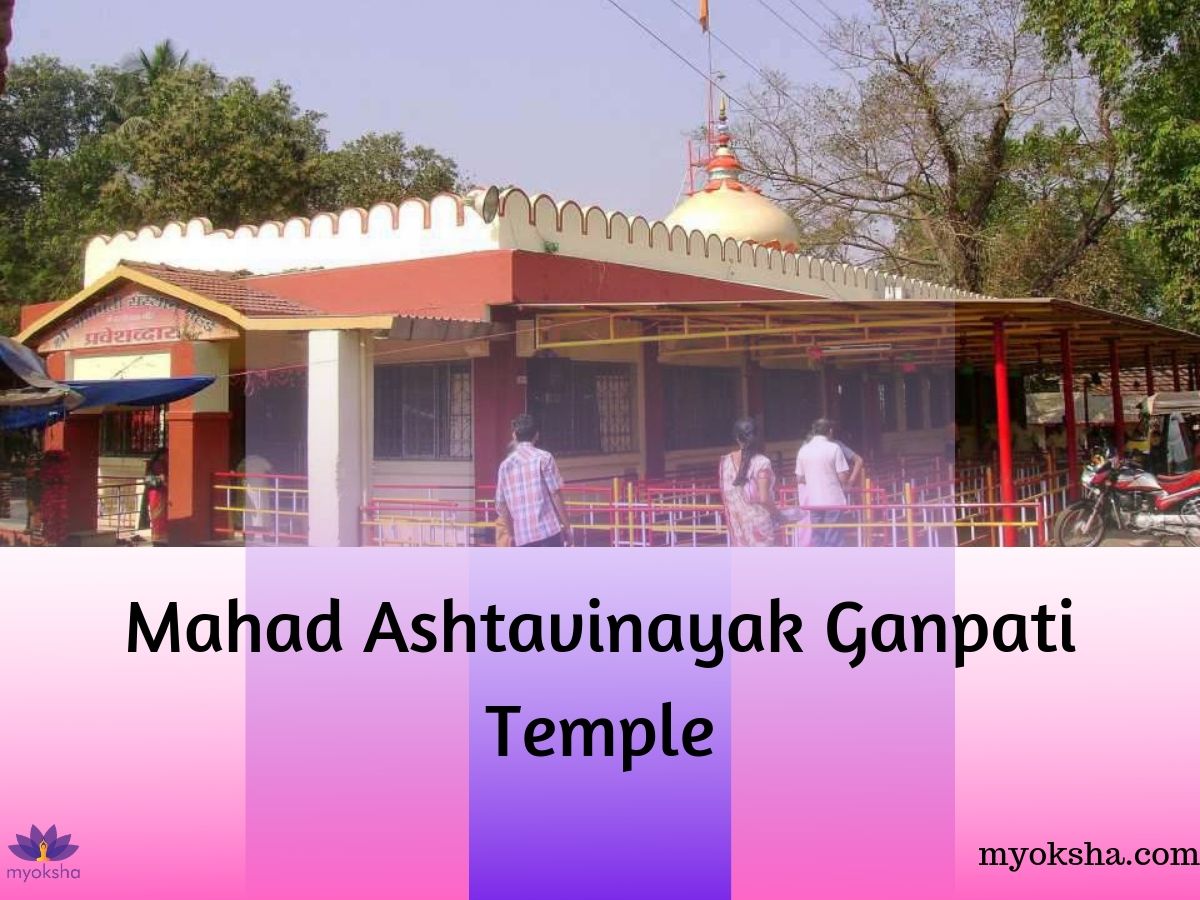 Mahad Ganpati Varad Vinayak Temple is dedicated to the Hindu deity Lord Ganesh and is one of the Eight Ashtavinayak Temples of Pune in Maharashtra. The temple is in Mahad village, Raigad district. Subhedar Ramji Mahadev Biwalkwar built the Mahad Ganpati Temple in the year 1725.

Devotees who pay a fee of INR 31,000 have an opportunity to worship the Lord for the entire day. Moreover, no priests or officials will interrupt the devotee during his prayers.

Mahad Ganpati Temple performs rituals on behalf of devotees. The priest offers Holy ash and Prasad to devotees who do the rituals.

What is the significance of Mahad Ganpati Temple?

The significance of the Mahad Ganpati temple is that the Varad Vinayak idol is self-manifested. The Lord’s idol was found immersed in a lake in the year 1690 by a Ganesh devotee named Paundkar. Devotees can come into the sanctum sanctorum and directly worship the Lord at Mahad Ganpati Temple.

The idol at the Varad Vinayak Mahad Ganpati Temple is Swyambhu and the temple is actually recognised as a Math.

The history attached with Mahad Ganapati temple relates to the following legend:

Legend of Varad Vinayak: During his hunting trip, Prince Rukmaganda of Koudinyapur stopped at Rishi Vachaknavi’s hermitage. The Rishi’s wife Mukunda admired the handsome prince and tried to seduce him, but the righteous Prince refused. But, Lord Indra saw the plight of the lovesick Mukunda.

Therefore, he impersonated Prince Rukmaganda and fulfilled her desire. Mukunda soon gave birth to a son Gritsamada, who grew up to be a great scholar. Gritsamada was once invited to debate along with great Rishis. One of the Rishis refused to debate with Gritsamada as he was not a true Brahmin.

A surprised Gritsamada questioned his mother and learned about his birth. In a fit of anger, he cursed that she will turn into a thorny plant. Mukunda, in turn, cursed Gritsamada that he will have a demon child. When the two were cursing each other, a celestial voice said that Gritsamada was Lord Indra’s son.

A repenting Gritsamada retreated to Pushpak forest and performed penance to Lord Ganesh. Pleased with his prayers and devotion, Lord Ganesh appeared before him and granted him a boon. Gritsamada requested that he be recognized as a Brahmin and also that Lord Ganesh stay in this forest and bless the people.

Hence, Lord Ganesh granted his two wishes and stayed in the forest. So, Gritsamada called Lord Ganesh as Varad Vinayak or the Lord who grants wishes.

Scenically located this temple is adjacent to a beautiful pond and it is believed that the idol of the Lord was found immersed in the nearby lake.

The architecture of Mahad Ganpati Temple –

The temple is in all respects basically planned with a tiled rooftop. It has an arch 25 feet high with brilliant apex and a brilliant summit (Kalas) which has a beautifully carved cobra. The Temple is 8 feet long and 8 feet wide.

The first icon of Varad Vinayak can be seen outside the sanctum. Since the symbol was in a severely endured condition, the temple trustees inundated that icon and blessed another icon in that place. Be that as it may, such a choice of trustees was protested by few individuals and a suit was documented in the district court.

Presently two icons, one inside the sanctum and one outside the sanctum can be seen. The sanctum made up of stone and encompassed by flawlessly cut stone elephant carvings, houses the symbol.

A Gomukh is seen on the north side of the temple from which streams the heavenly water. A blessed lake is located on the west side of the temple. This temple additionally has the symbol of Mushika, Navagraha Devtas, and Shivalinga.

It is also believed that the person who receives a coconut as Prasadam during Maghi Chathurthi is blessed with a son.

Which festivals are celebrated at Mahad Ganpati Temple?

Some of the festivals celebrated at Mahad Ganapati Temple are:

How to reach Mahad Ganpati Temple?

Where to stay near Mahad Ganapati Temple?

Mahad has a Bhakta Niwas or Pilgrim’s rest house with clean rooms at very nominal rates. Mahad doesn’t have any hotels, but devotees can either choose between the rest house of stay at Mumbai / Pune.

Where to eat near Mahad Ganapati Temple?

The Mahad Ganpati Temple offers Prasad for devotees. Villagers and priests also offer Thali meals which are pre-booked. Also, devotees who make day trips to Mahad can also choose to eat in the city of Mumbai/Pune where one can find excellent and diverse food options.

What are the sightseeing places near Mahad Ganapati temple?

Temples near Mahad Ganapati Temple are:

There are statues of four elephants on four sides of the temple that are said to guard the temple.

The other Ashtavinayak temples are:

Is there online booking available for Mahad Ganpati Temple?

Where can we stay near Mahad Ganpati Temple?

The Dharamshala or Bhakta Nivas is the best option to stay near Mahad Ganpati Temple. Also, they can be found at cheap rates.

What is the nearest airport to Mahad Ganpati Temple?

The nearest airports are in Mumbai and Pune at a distance of 63 km and 85 km.

What is the temperature in Mahad Ganpati Temple?

What is the significance of Mahad Ganpati Temple among Ashtavinayak Yatra?

The Mahad Ganpati Temple comes in 4th number during the Ashtavinayak Yatra.

How do devotees pray in the Mahad Ganpati Temple?

Devotees can offer prayers in the Garbhagriha of Mahad Ganpati temple. Flowers, Garlands are the main offerings made at Mahad temple.