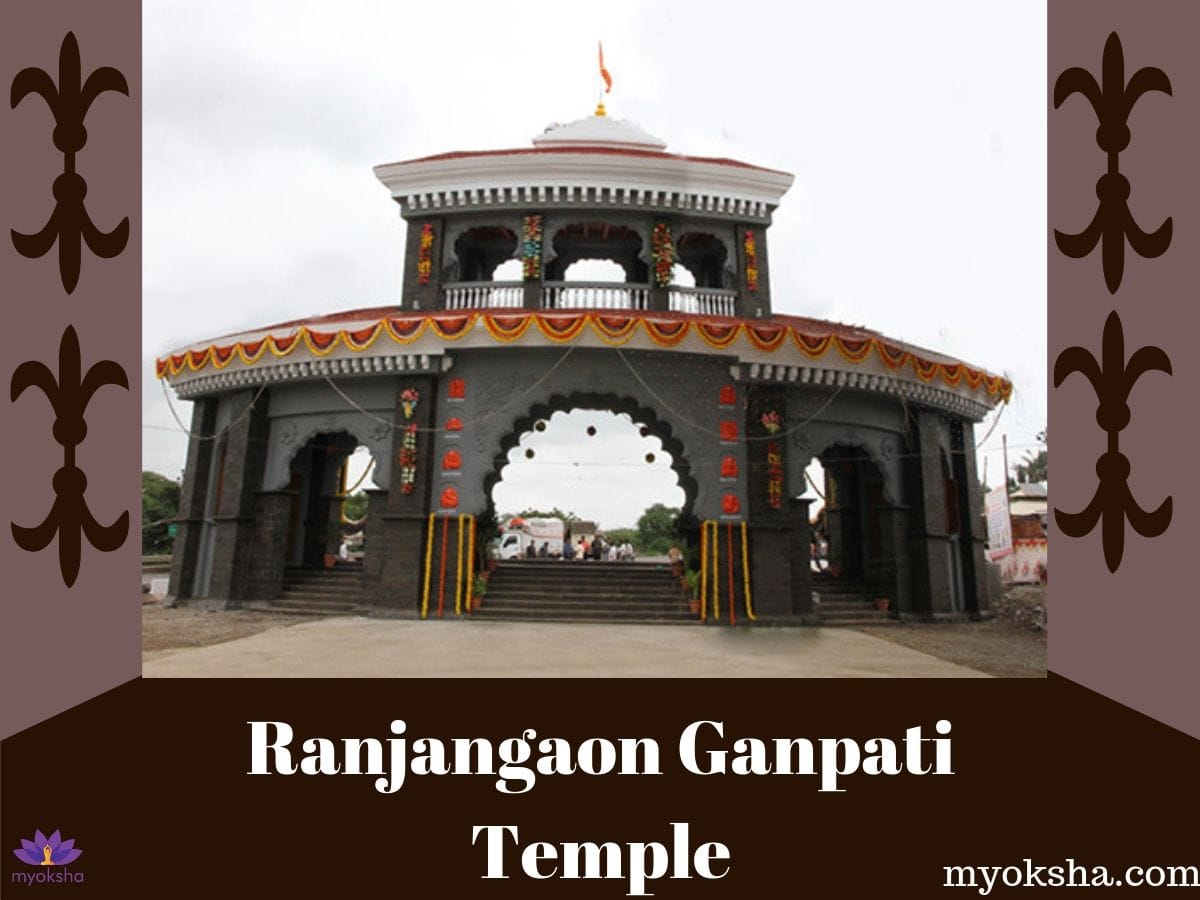 Ranjangaon Ganpati Temple is dedicated to Lord Ganesh and is one of the eight Ashtavinayak Temples. It is in  Ranjangaon, Shirur Taluka. According to beliefs, Lord Shiva worshipped Lord Ganesh here before proceeding to defeat the demon Tripurasura. Lord Ganesh is Mahaganapati since he is powerful and has several arms.

The timings of Chintamani Ganapati Temple are:

Here’s a list of the poojas and rituals performed at Ranajangaon Ganapati Temple:

Large crowds gather during this festival to also witness the wrestling matches which are specially organized at this time.

What is the significance of Ranjangaon Ganpati Temple?

Lord Mahaganapati is very powerful. The villagers of Ranjangaon do not bring the Ganesha idols into their homes during Ganesh Chaturthi. Instead, they visit the temple and offer their prayers

Devotees believe that there is another idol below the present idol. The idol supposedly has 10 trunks and 20 arms. However, no one knows if this idol still exists. This idol is supposed to be called as Mahotkat.

It is believed that the place where Lord Shiva invoked Lord Ganesha & defeated Tripurasura is Ranjangaon (the word ranjan means the delighted one), prior to which it had the name of Manipur.

An east-bound temple, it is effectively recognized as a result of its colossal passageway, which has statues of the door-keepers Jay and Vijay. A novel part of the temple is that it is planned in a such a way, that during ‘Dakshinayan‘ and ‘Uttarayan,’ the sunbeams fall legitimately on the divinity.

Similarly wonderful is the sanctum, which was developed by Thorale Madhavrao Peshwa. Symbol of Lord Ganesha has an outstandingly wide brow, ten trunks, twenty arms, further flanked by the statues of Riddhi and Siddhi.

What is the history of Ranjangaon Ganpati Temple?

As per the history, the temple was built in the middle of the ninth and tenth century. The temple is developed to the point that sunbeams fall straightforwardly on Shree Ganesha’s idol. Since this temple was on his way to war, Shreemant Madhavrao Peshwa used to stop here to have Mahaganapati’s darshan.

Madhavrao Peshwa made a room in the stone cellar in the temple to keep the icon of Lord Ganesh. He additionally built a stone sanctum around this Swayambhu or self-radiated idol. In 1790 A.D he gave an inherited right to perform pooja of Mahaganapati to Shri Anyaba Dev.

The temple hall was built by Sardar Kibe and Owaris which are small apartments enclosing the wall of temple were built by Sardar Pawar and Shinde. Renowned hermit Morya Gosavi had presented an icon made of five metals to Shri Anyaba Dev. This symbol is taken out in parade on festive days.

Nagarkhana is located over the passageway entrance gate. This Nagarkhana was inaugurated by Maharashtra’s respectable Chief Minister Shri Manohar Joshi on third May 1997. The temple confronting east has immense and delightful passageway gate. Icons of two doorkeepers specifically Jay & Vijay are available close to the door.

Legend of Mahaganapati: Sage Gritsamad’s son Tripurasur was a brilliant young boy and a devotee of Lord Ganesh. Pleased by his devotion and prayers, Lord Ganesh blessed the boy and gave him three pura’s of precious metals. Only Lord Shiva could destroy them. However, over a period of time, Tripurasur became vain and created chaos in the world.

He even disturbed Lord Brahma and Vishnu by his atrocities and they went into hiding. Sage Narada then advised the frightened gods that they should take the help of Lord Ganesh. The Gods decided to invoke Lord Ganesh, who appeared and accepted to help them.

Lord Ganesh disguised as a Brahmin and met Tripurasur under the pretext of creating three flying planes. In return, he ordered Tripurasur to bring the Chintamani idol from Mount Kailash. Then, the greedy Tripurasur went to Mount Kailash and fought with Lord Shiva for the idol.

Lord Shiva realized that he had not offered his prayers to Lord Ganesh first, and hence was unable to destroy the pura’s or defeat him. Therefore, he recited the Sadaakshar Mantra and invoked Lord Ganesh, who emerged and gave him the instructions for defeating Tripurasur.

Then, Lord Shiva followed the directions, defeated the greedy Tripurasur and also created a temple for Lord Ganesh at that spot.

According to some Puranas and legends Rishi Grutsamada sneezed and a boy was born who was named Tripurasur.

What are the festivals celebrated at Ranjangaon Ganpati Temple?

Some festivals celebrated at Chintamani Ganapati Temple are:

On the sixth day devotees take darshan of murti & then go to Mahaganapati’s temple by performing Lotangan (prostration) on the way.(lotangan means proceeding by rolling one’s self over & over).

How to reach Ranjangaon Ganpati Temple?

Where to stay near Ranjangaon Ganapati Temple?

The Mahaganapati Temple Trust runs a Bhakta Niwas which offers rooms at nominal charges, where one can stay.  There are quite a number of hotels offering accommodation options for all budgets. Pilgrims also prefer to do a day trip from Pune, as it offers a vast range of accommodation options.

Where to eat near Ranjangaon Ganapati Temple?

Ranjangaon has a good number of restaurant options where one can eat. The Mahaganapati Temple Trust also operates an Annapurna Bhojanalaya, which provides afternoon lunch.

What are some temples near Ranjangaon Ganapati Temple?

Shivneri Fort and Temple: Shivneri Fort is the birthplace of Chatrapathi Sivaji. The fort is visible from the Vighneshwar Vinayak Temple and also houses a small temple for Goddess Shivani. Devotees traveling to Ozar and Lenyadri Ashtavinayak temples also stop at this Fort as it is a place of interest.

Is there any online booking available for Ranjangaon Ganpati Temple?

What is the nearest airport to Ranjangaon Ganpati Temple?

Baramati Airport which situated 21 kilometers from Ranjangaon is the nearest airport to reach the temple.

What is the temperature in Ranjangaon Ganpati Temple?

Where to stay near Ranjangaon Ganpati Temple?

Shree Khetra Ranjangaon Devstan Trust is available near the temple for lodging and boarding.

What is the check-in procedure for staying in the Bhakta Niwas?

Devotees have the flexibility to check-in at 6.00P.M to 11.45P.M. Check-in time needs to specify when booking accommodation online. Check out time for Devotee is fixed at07.00AM.

What is the significance of Ranjangaon Ganpati Temple among the Ashtavinayak Yatra?

The Ranjangaon Ganpati Temple comes in 7th number during the Ashtavinayak Yatra.