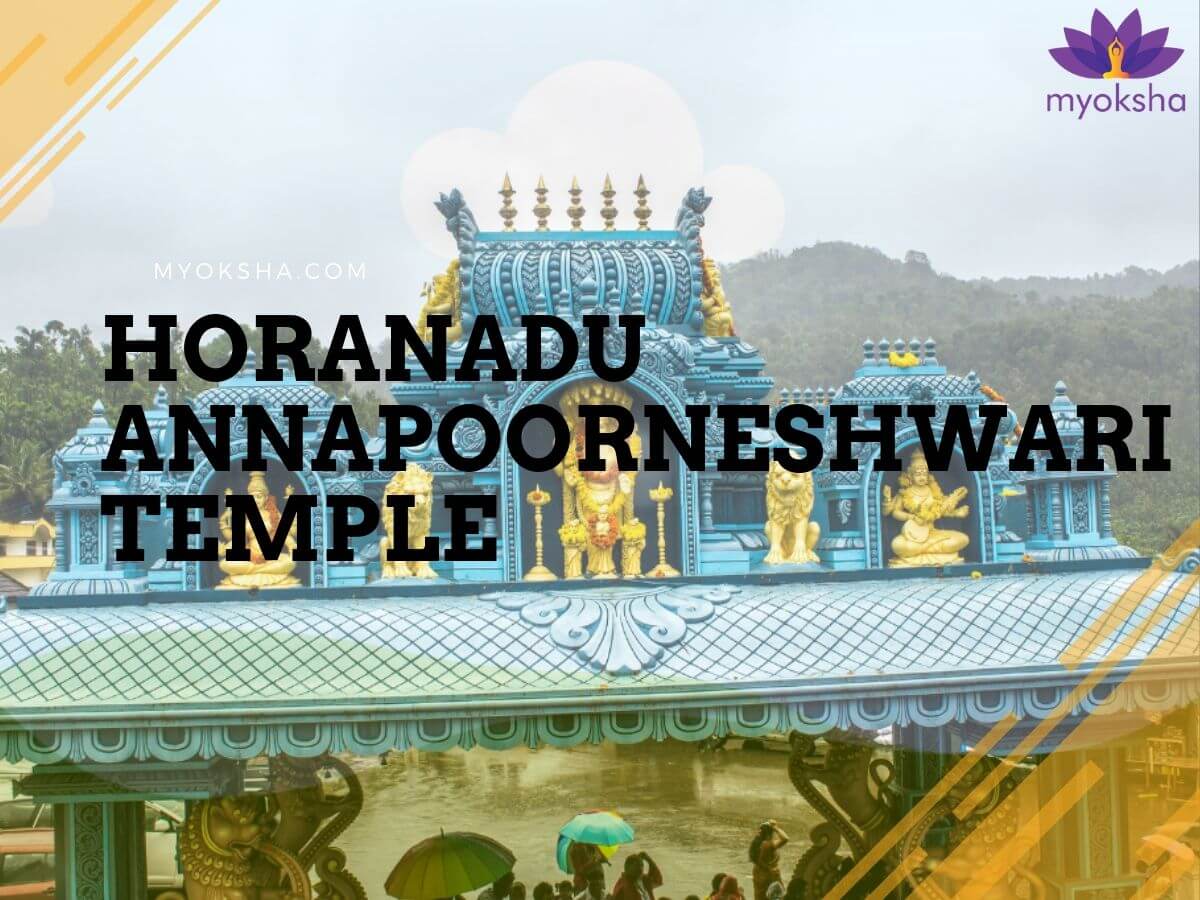 Horanadu Annapoorneshwari Temple is dedicated to Goddess Annapoorneshwari and is located on the banks of River Bhadra in Horanadu, in the Western Ghats of Karnataka. The town of Horanadu is also popular as “Sri Kshethra Horanadu” in respect of the Goddess.

Planning to visit this temple? Have a look at our Western Ghats Temple Tour covering Horanadu Temple.

The Sevas and poojas that take place at Horanadu Annapoorneshwari Temple are as below:

You can also find a description of these sevas and poojas here:

The dress code is as follows:

What is the significance of Annapoorneshwari Temple?

All the visitors, irrespective of religion, caste or creed, are served with a three-course vegetarian meal for free. The pilgrims are served thrice a day – breakfast, lunch, and dinner. They are also provided with tea and coffee in the evening for free.

The history of Annapoorneshwari Temple does not mention the exact date of the construction of the temple. Devotees believe that the original temple was very small and was established by holy Sage Agasthya. The 5th Dharmakartharu, Sri D.B. Venkatasubba Jois, also renovated the temple following the Vaastu Shilpa and Astrology.

The 6th Dharmakartharu constructed the Navagraha Temple. He also established the steam cooking system in the Temple Kitchen, Annachathra, and Guesthouses for pilgrims and the labor colony.

What is the legend of Goddess Annapooreshwari?

An interesting legend associated with the Goddess Annapoorneshwari is that of her conversation with Lord Shiva regarding the importance of food in one’s life. As per the legend, Shiva and Parvathi were playing the game of dice. Shiva lost all that he possessed to Parvati during the game.

So, Vishnu asked Shiva to play again. On his advice, Shiva played again and won everything back. But Parvati became suspicious and an argument ensued between Shiva and Parvati. Vishnu then intervened and stated that he made the moves whereas Shiva and Parvati were playing an illusion.

Lord Shiva proposed that everything is temporary like a Maya or an illusion. He concluded that food is also an illusion. Goddess Parvati disagreed and disappeared to prove that food is not an illusion. As a result, nature became still, seasons stopped changing and new plant growth stopped.

The land eventually became barren and drought ensued. Therefore, everyone including humans, animals, and demons prayed for food. Lord Shiva soon realized the importance of food and recognized it as a basic need for all creatures in the world.

Goddess Parvati, taking pity on everyone, appeared in Kashi (Varanasi) and started distributing food. Then Lord Shiva appeared before her with a begging bowl, seeing which Goddess Parvati fed him with her ladle. Since then, Goddess Parvati is worshiped as Annapoorneshwari.

Devotees have to climb a few steps to reach the main temple complex. The Gopuram of the Temple also has various sculptures of Gods and Goddesses. A mandapam is there on the left of the main entrance. A queue complex next to the Mandapam is also there for entry into the main hall where Annadanam takes place every day.

Moreover, towards the back of the Horanadu Annapoorneshwari Temple, a commercial complex of four to five shops is present that sell Pooja materials as well as small toys and gifts from Horanadu. The ceilings of the temple also have wonderful carvings.

The idol of the main deity of the Horanadu Annapoorneshwari Temple, Sri Annapoorneshwari is made of gold. The Goddess has a standing posture with four hands, each holding a Shanka, Chakra, Sri Chakra and Devi Gayathri.

Besides the above festivals, other festivals celebrated here are Deepavali, Shankara Jayanti, and Havi.

The Horanadu Annapoorneshwari Temple Administration has constructed the Bhadra Nivasa Lodge near the Temple premises where devotees can stay. The devotees can book rooms here at nominal rates for their stay. The room options vary from double bed, standard to AC. Suites are also available for large families. Hot water and generator facilities are provided for certain hours every day.

For online booking and any other queries related to the temple, one can visit the official website at https://srikshetrahoranadu.com. However, the requirement of Identity Cards is must for booking accommodation in the Lodge.

Several private hotels are also present around the hilly town of Horanadu like the Nature Valley Homestay, Suprabha Residency, and Sri Devi Comforts. However, they are at a distance from the temple.

Where to eat near Annapoorneshwari temple?

The Horanadu Annapoorneshwari Temple provides Annadanam to the pilgrims every day in the afternoon and the evening where devotees can eat. The meal is vegetarian with a dessert too. Besides this, few small hotels are also present outside the temple complex that one can visit for more food options.

Which are some of the temples near Annapoorneshwari Temple?

Some of the temples near Annapoorneshwari Temple are:

Why the Goddess is called as Annapoorneshwari?

Sri Annapoorneshwari is the Goddess of food and nourishment. The word Annapoorna is a conjunction of two words- Anna meaning food or grains and Purna meaning complete & perfect.

What is the land address of Annapoorneshwari Temple?

What is the entry fee to Annapoorneshwari Temple?

Free, there is no entry fee.

What are the other famous temples dedicated to Sri Annapoorneshwari?

The other famous temples dedicated to Sri Annapoorneshwari are the Annapoorna Devi mandir and the Kasi Vishwanath Temple in Varanasi.

For online booking and any other queries, one can visit the official website at https://srikshetrahoranadu.com.

What is the weather around Horanadu?