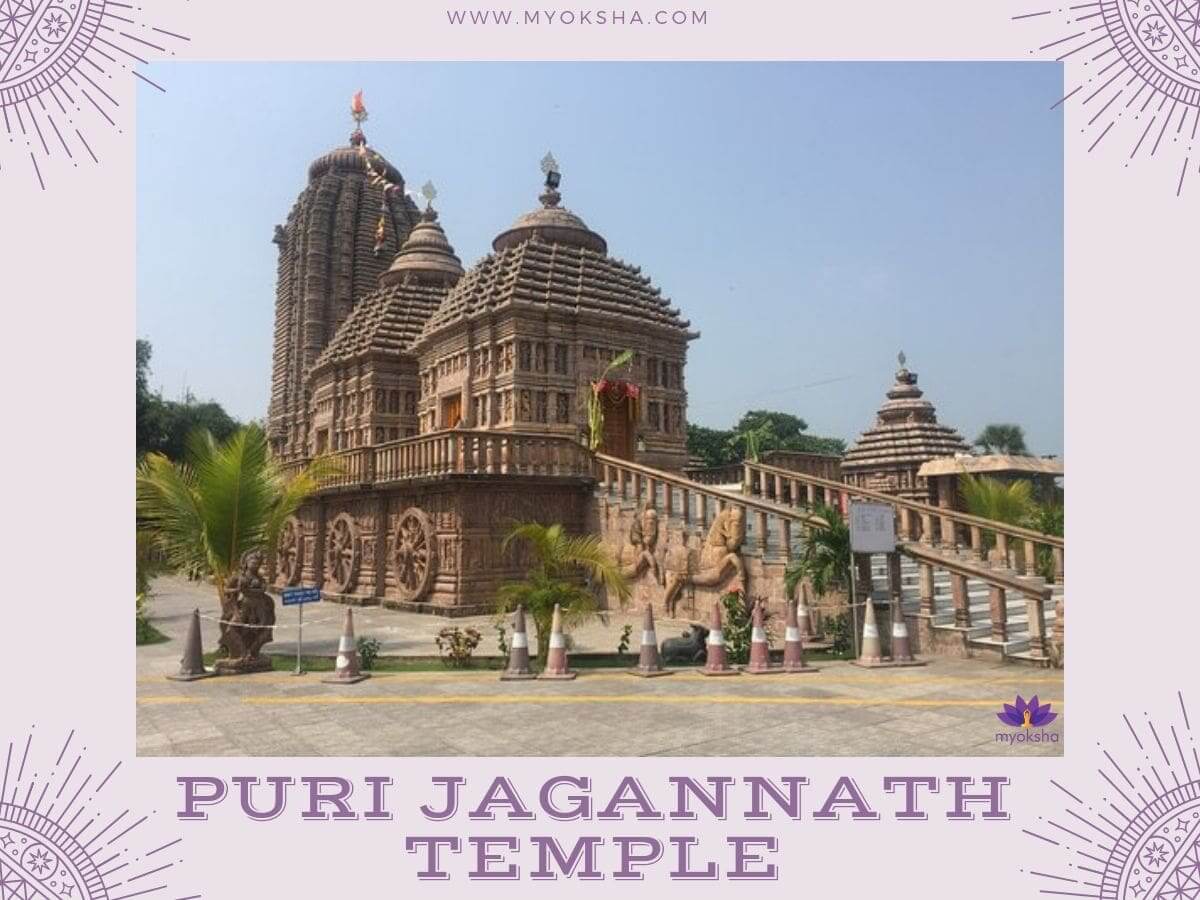 Planning to visit this temple? Have look at our Bhubaneswar Puri Konark Temple Tour.

The timings of the Puri Jagannath Temple are as follows:

Puri Jagannath Temple flag changing happens at 6 PM during summers and at 5 PM during winters. Every day, a new flag is tied to the wheel on the top of the temple for the devotees to witness.

As per the Jagannath Temple dress code, men should wear formal pants and shirt. Women devotees should wear a sari or salwar kameez. Devotees will not be allowed to enter the Puri Jagannath temple wearing informal attire like jeans, shorts or T-shirts.

What is the significance of the Puri Jagannath temple?

The significance of Puri Jagannath temple lies in its idol. Unlike most idols located in other parts of the country, which are usually made of stone or metal, the idol of Lord Jagannath is made of wood. It is a popular belief that Goddess Mahalakshmi herself supervises cooking in the temple’s kitchen.

A ritual unique to the Puri Jagannath temple is the Nabakalebara process. A Neem tree is selected, cut, and an exact replica of the original idols are made out of it. Then the old idols are buried under a place called Koili Vaikuntha.

What is the history of the Puri Jagannath Temple?

The history of Puri Jagannath dates back to many centuries. The copper plates of the Puri Jagannath Temple which were discovered belongs to the Ganga Dynasty which was then under the rule of Anantavarman Chodaganga Dev of Kalinga. In 1174E, the King Ananga Bhima Dev built the Puri Jagannath temple in its present form.

According to a story,  King Indradyumna of the Malwa had a dream that one can see Lord Vishnu in his true form in Utkala (ancient name of Orissa).

He appointed a person named Vidyapati to search for this form. Vidyapati came upon the tribal community and found out about the worshipping of the Nila Madhava and he married the daughter of the chief of the tribe. The tribals showed him the way to the place housing the Nila Madhava.

Vidyapati informed the king about the place of worship but when the King went there by himself, the Nila Madhava disappeared. Lord Vishnu, taking pity, issued a divine message to him that he should go to the shores of Puri and create the image of Lord Jagannath from a log of wood that will be floating on the waves.

Lord Vishnu appeared as a carpenter and asked to leave him undisturbed for 21 days in a room so that he could prepare the image. However, on the insistence of the Queen, the room was opened early and only the unfinished images of the three gods and the Sudarsana Chakra were present.

What is the architecture of this temple?

The temple is dedicated to Lord Jagannath, Balabhadra and Subhadra. Further, it has four areas – Vimana (Sanctum), Jagamohan (Porch), Natamandir (Audience Hall) and Bhogamandap. The Vimana was once popular as the tallest structure in ancient India. On the walls, several murals depict the life of Lord Krishna.

What are the sevas and poojas performed at Puri Jagannath Temple?

The sevas and poojas performed at this temple are:

How to reach Puri Jagannath Temple?

Here’s how to reach Puri:

Where to stay near Puri?

The Jagannath Temple Administration maintains two guest houses by the names of Shri Gundicha Bhakta Nivas and the Nilachal Bhakta Yatri Nivas.  One can book rooms online by visiting the site.

Private 3-star and 5-star hotels are also available in plenty for the pilgrims throughout the city of Puri.

Some of the temples near Puri Jagannath are:

Is the Puri Jagannath Temple open throughout the year?

Yes, the Puri Jagannath Temple is open all 365 days of the year.

The entry to the Puri Jagannath Temple is free of cost.

Which is the best time to visit the Puri Jagannath Temple?

October to February is when winter starts in Orissa. The weather is pleasant, making it an ideal time to visit the temple.

The summers at Orissa starts from March and continues until May. The summers here can be very hot and humid. Temperatures during the daytime often go up to 45 º C.

In Orissa, winters start in October and continues until January. The temperatures during this time range from around 16 º C to 30 º C.

If you have any questions about the Puri Jagannath Temple, please leave a comment below, and we will get back to you within one hour.