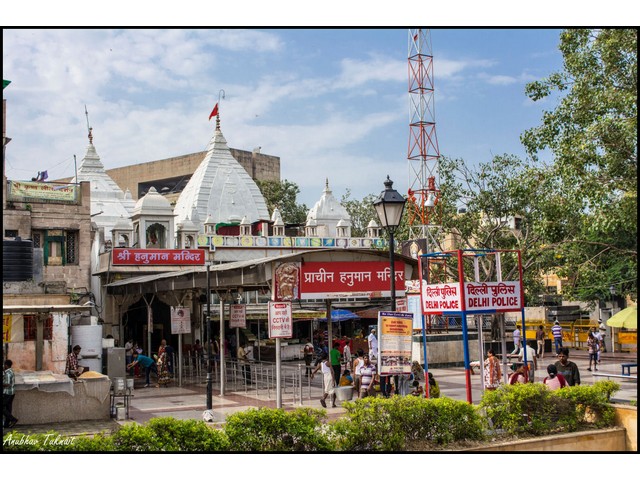 Pracheen Hanuman Mandir Delhi located at Connaught Place, New Delhi, is an ancient Hindu temple and is believed to be one of the five temples of the Mahabharata days in Delhi. The other four temples include the Kalkaji, a Kali temple in South Delhi containing a Swayambu rock Idol, the Yogmaya Temple near Qutub Minar, the Bhairav temple near the Purana Qila and the Nili Chatri Mahadev (Shiva temple) at Nigambodh Ghat.

Pracheen Hanuman Mandir Delhi, which houses a self-manifested idol of Hanuman, has an intriguing feature fixed in the spire which is in the form of a crescent moon instead of the Hindu symbol of “Om”. This feature became mainly important during the Mughal period henceforth corroborating this extraordinary depiction.

The idol which is devotionally worshipped in the temple is of Bala Hanuman, the infant depiction of Sri Hanuman Ji Maharaj. The entry to the temple is through the Baba Kharak Singh Marg where the temple is located. Devotees enter through a set of marble steps from the road which leads into the main foyer of the temple through massive silver-plated doors, which are engraved with scenes of the epic Ramayana story.

The foyer is well ventilated with clerestory windows which are beautifully adorned with paintings of Hanuman in the four cardinal directions depicting his four aspects. Below each Hanuman painting is present a marble inscription of Tulsidas’s Sundar Kand that is affixed to the walls. The Sanctum Sanctorum, that houses the Hanuman idol is on the north wall with the idol facing the southern direction. Images of Radha and Krishna, a central triumvirate of Rama, Lakshmana and Sita are also installed to the right of the Hanuman idol on the same wall.

As the idol of Hanuman faces the southern direction, devotees can only one eye of the idol. The idol depicts a Gada in the left hand with the right hand crossed across the chest showing devotion to the adjacent idol of lord Rama, Lakshman, and Sita. The idol is adorned with a tapering crown and also has a sacred thread on the right shoulder and is clad in a dhoti. The height of the temple is reportedly 108 ft (32.9 m). The ceiling of the main mandap depicts the epic story of Ramayana which is artistically painted.

One of the most important features of this temple is the 24–hour chanting of the mantra (hymn) “Sri Ram, Jai Ram, Jai Jai Ram”, since August 1, 1964, which has earned the temple a place in the Guinness Book of World Records. Several beliefs and traditional rituals are associated with this temple, one of them being that if the devotees whisper their heart’s wishes into the ears of the idol of Nandi bull (Lord Shiva’s mount) which is situated inside the temple, they are sure to be granted.

After the Pandavas won the Kurukshetra war against the Kauravas and re–established themselves in Indraprastha, the Pandava clan is stated to have built five temples of Hanuman and other deities

Men and women are advised to wear decent clothing. The entry is free. People are supposed to leave their chappals and other footwear outside the temple while entering the holy sanctum.

Hanuman Jayanti: The birthday celebrations of Lord Hanuman, is held every year with great pomp on the full moon (Purnima) day in the month of Chaitra (March – April) as per the lunar Hindu Panchangam or Hindu calendar. Colorful processions with festoons and with devotees wearing Hanuman masks and tails and carrying large idols of Hanuman fill the streets.

The daily pujas are carried out at all times of the day. Tuesdays and Saturdays are considered for worshipping Lord Hanuman, so there are a few special pujas carried out on these days.

By Road: Connaught Place’s Prachin Hanuman Mandir is well connected by bus and the Delhi Metro services. Besides, one can also rent a car or auto-rickshaw from anywhere to Connaught Place. Delhi Transport Department has added more buses to its fleet. Though the old buses are still in service, now you will find the green buses which are more comfortable to reach Connaught Place and Prachin Hanuman Mandir. Terminuses such as Kashmere Gate, Sarai Kale Khan, and Anand Vihar are located nearby which leads to various important places in the city.

Several 3-star and 5-star hotels are also available for pilgrims and tourists. Hotels namely The Park, The Connaught and Ram’s Inn are pretty popular among the tourists who come to visit regularly and are also located nearby.

Many lodges and hotels are present in the near proximity catering to different tastes. The kachoris available at the local shops are very famous. The temple’s neighbourhood is also famous for its clustered shops of bangles, kachoris, and kulfis. The Prasad served at the temple and its premises is made of pure desi ghee which altogether enamors the visiting crowd.