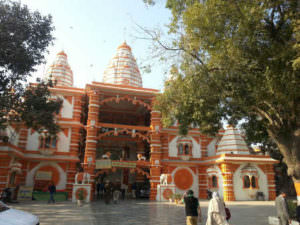 Sheetla Mata Mandir Gurgaon is a major Hindu pilgrimage. Lots of pilgrims come here every day to offer prayer and seek blessings from the Goddess. This temple is located in Gurgaon, Haryana. Sheetala Devi is a Goddess which is being worshipped by people of different parts. People from Pakistan, Nepal, Bangladesh, North India, West Bengal worship her. She is better known as pox-goddess. She is also known as Goddess of ghouls, sores, pustules and various other diseases.

This temple is situated near a pond at Gurgaon village. Sheetala Devi Mandir is located in the suburb of Guru Dronacharya’s birth place in the state of Haryana. There is a large crowd of devotees throughout the year except during the month Shravana (July-August). During the month of Chaitra (March-April), this place looks like another Kumbh-Mela. There is a large crowd of pilgrims on Mondays of this month.

Sheetla Mata Mandir Gurgaon is open for darshan from 6 am to 8 pm.

The celebrations of Sheetala Ashtami are very famous in the north Indian states of Rajasthan, Gujarat, and Uttar Pradesh. In the Indian state of Rajasthan, the Sheetala Ashtami festival is celebrated with great enthusiasm. A huge fair is organized for this occasion and several musical events and programmes are also staged. Devotees celebrate this festival with immense joy and devotion. It is believed that by keeping the vrat on this chosen day, they will be prevented from several deadly diseases. On the day of Sheetala Ashtami according to the traditions, the families do not lit the fire for the purpose of cooking. They, therefore, prepare food a day in advance and consume the stale food on an actual day. It is only in Sheetala Ashtami that there is the unique custom of offering stale food to Goddess Sheetala.

Devotees get up early, before sunrise and take a bath. They visit the Sheetala Devi temple and worship the Goddess with ‘haldi’ and ‘bajra’. After performing the puja rituals they listen to the ‘Basoda Vrat Katha’. ‘Rabri’, ‘curd’ and other essential offerings are then made to Goddess Sheetala. People also take blessings from their elders. After offering the prepared food to the Goddess, rest of the food is eaten all day long as Prasad and is known as ‘Basoda’ in the local language. The food is also distributed among other devotees and also given to the poor and needy people. On this day reading ‘Sheetalashtak’ is also considered favourable.

Where to stay in Gurgaon?

There are various places where one can live. There are various hotels and private organizations which provide dwelling places for the tourists. There are many hotels who provide proper hygiene, clean food, and wifi for they customers. These hotels are built keeping the needs and budget in mind. These hotels have a clean and hygienic environment. Tourists are treated very well by the hotel staffs as well.

These hotels and private organizations donot charge high keeping the budget and the needs of the customers. They provide a very pleasant environment and stay for the tourist. They provide clean and healthy home-made food for the tourist. Nowadays, all the hotels provide tourists with wifi facility so that they can enjoy their stay more and remain connected to the whole world.

Apart from the prasad provided in the temple, one can also have food from hotels outside the campus. These hotels provide clean and hygienic food. There are various other places to eat food. There are many hotels and cafe which provide food keeping the taste and needs of the devotees. They cost very nominal keeping the needs and budget of the tourists.

Places to visit nearby