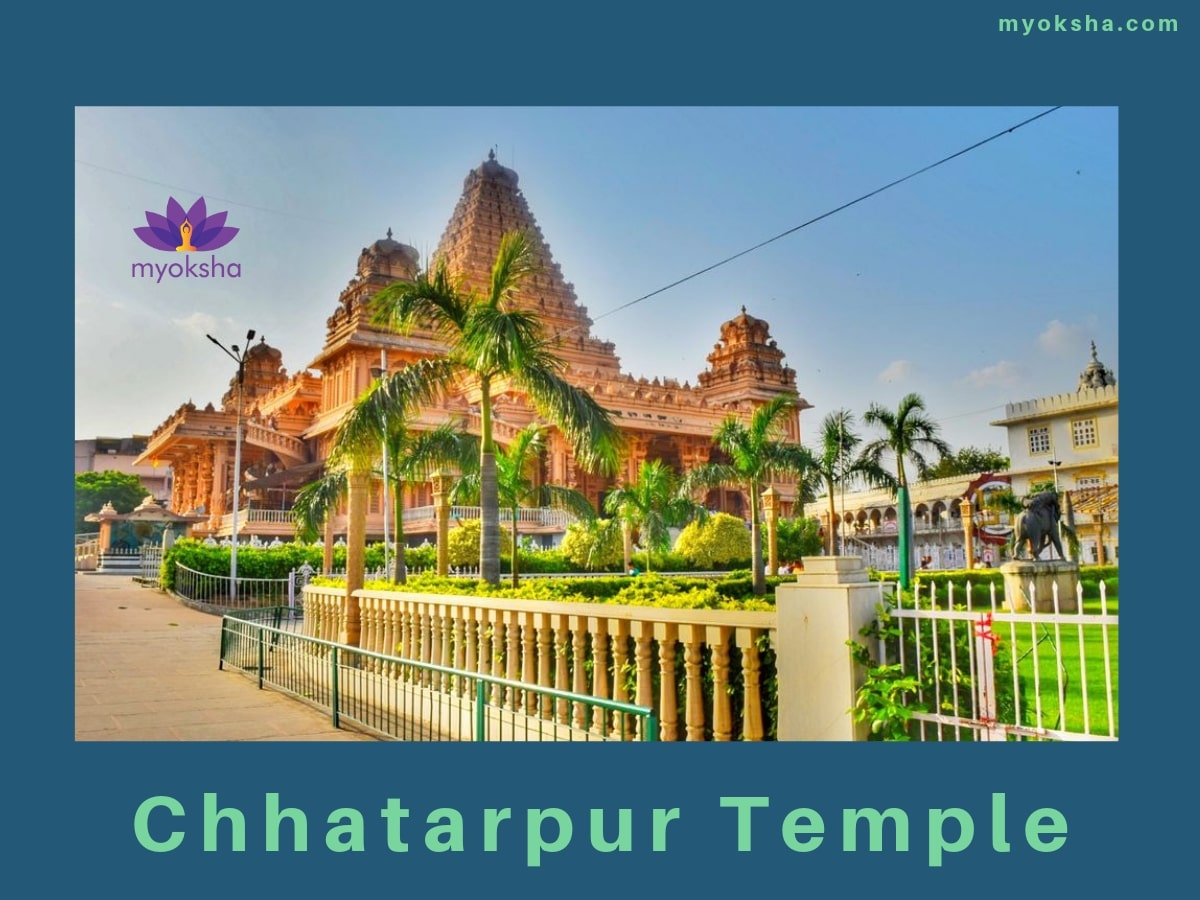 Chhatarpur Temple is located on the outskirts of the South-western Delhi, i.e. Chhatarpur. It is 4 km away from Qutub Minar. This temple is home to Goddess Durga’s both manifestations namely, Maa Gauri and Maa Katyayani.

The temple is popular among its devotees by the name of Shri Adhya Katyayani Shakti Peeth Mandir. Sant Shree Nagpal Baba founded the temple in 1974. The temple expands to the area of about 70 acres. And for a fact, it is one of the biggest temple complexes in India.

It is like a marble art coming alive and is a modern mix of both northern and southern architectures. Nevertheless, the temple’s architecture is of the Vesara genre.

The temple has a huge area. Moreover, other smaller temples too stand on the Chhatarpur temple land. Some of these shrines are Ram Mandir, Hanuman Mandir, Shiv Mandir, Nageshwar Mandir etc.

Devotees can offer prayers in the temple during the following timings-

Poojas and Rituals in the Chhatarpur Temple

Morning Aarti is done by the Pujari of the temple at 4:00 am when its still dawn, every single day. Special Aartis of Kumbabhishek and Guru Purnima takes place during Navratri and Guru Purnima respectively.

Darshan of Goddess Katyayani can be done only on the Ashtami of every month or during the nine days of Navratri.

Baba Sant Nagpal Ji supervised the construction of the temple in 1974. Beliefs say that after the death of his mother, an unknown lady took Babaji under her care. The lady, however, claimed to be the mother of the universe. Hence, Babaji developed an unknowing devotion to the Goddess.

Hence, the temple came into existence after he moved to Delhi. He purchased this land from villagers and set up the huge temple complex.

He dedicated it to Goddess Katyayani. She is the sixth incarnation of Navdurga. Religious texts state that Goddess Katyayani is the creation of Shiva, Brahma and Vishnu and the savior of the Gods.

Katyayani was born to the Rishi Katyayani who used to pray to the Goddess Durga. Hence, he got the happiness of being a father to one of her incarnations. Its believed that Katyayani was extremely beautiful and hence caught the attention of the demons.

And so the demon Mahishasur had intentions to woo her. However, the Goddess insisted upon war as the only way to get her. And that is when the demon met his death in the hands of the eight-armed fierce protector of the Gods.

Worshipped as the Sixth manifestation of Navdurga, Maa Katyayani is the “Mahishasurmardini”. For the Goddess is the one who took away the life of demon Mahishasur.

According to Shaktism, Goddess Katyayani is the creation of Shiva, Brahma and Vishnu. She is the mighty one with three eyes and eighteen arms all of which hold lethal weapons. Her beautiful black locks and awestriking beauty never fails to charm her devotees.

What’s inside the Chhatarpur Temple

People are expected to come to the temple in decent attires. Also, any kind of provocative clothing is prohibited. Moreover, devotees take out their slippers outside the temple and wash their hands before offering prayers.

How to Reach the Chhatarpur Temple?

Metro Station is at walking distance of 800 meters from the temple. Devotees can either take a sharing auto rickshaw or walk to the religious site.

Moreover, there are several luxurious hotels nearby the temple like-

Delhi being the city, devotees have many options open to them. One can obviously enjoy the tasty langar at the temple or choose to eat from the nearby outlets. Delhi has many options on its street food to choose from and also does have outlets like Moti Mahal etc.

Frequently asked questions about the temple

Can I offer prayers to Goddess Katyayani everyday?

No. Goddess Katyayani’s darshan can only be availed on Ashtami of every month and on all Navratri days.

Does the temple provide any facility for a night stay?

Yes. The temple has its own Dharamshala for this purpose.

Is the temple open during the afternoon?

Yes, wheelchair facilities are provided by the temple staff.

Is there a parking facility near the temple?

Yes, The temple provides free parking for all transports.

Yes, One can get their child’s Mundan done here.

Photography is allowed in the temple?

How can I reach the temple from Chhatarpur Metro Station?

The temple is 800 metres from the temple so you can either walk or take an Auto Rickshaw.

Which is the best time to visit the temple?

The best time to visit the temple is during Navratris as the devotees can easily offer prayers to Goddess Katyayani.

Is there a theft report counter in the temple?

Yes, one can complain to the security staff and get things checked in the CCTV footage.