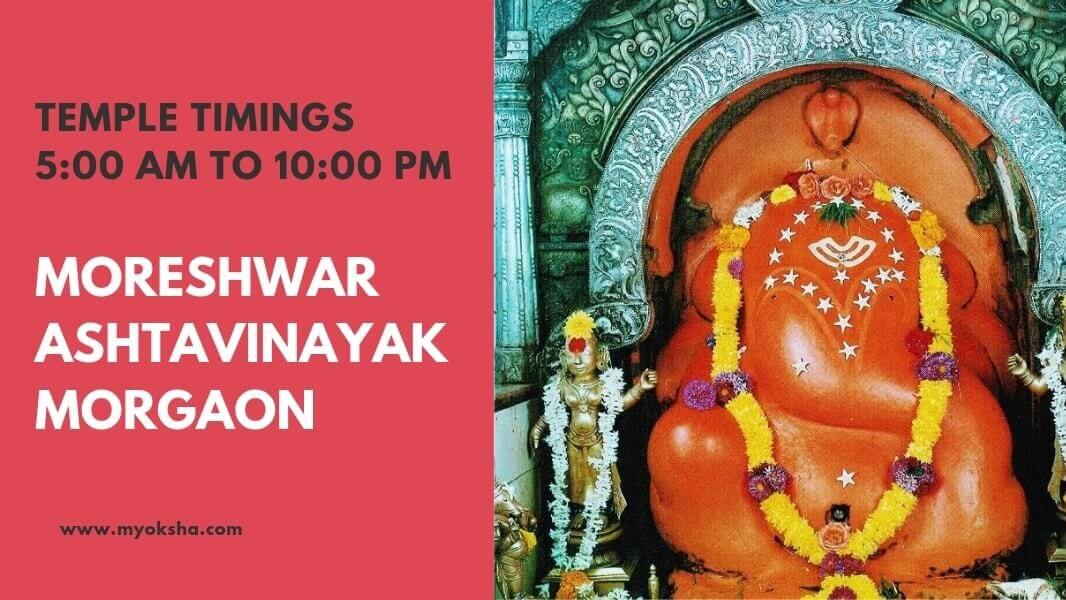 Morgaon Ganpati Temple is a famous pilgrimage destination and is dedicated to Lord Ganesha. It is located in Moragaon near Pune in the state of Maharashtra. It operates under the administration of the Chinchwad Devasthan Trust.

Planning to visit this temple? Have look at our Ashtavinayaka Yatra Tour Packages.

Here are the timings for Morgaon Ganpati temple:

What are the poojas and rituals in Morgaon Ganpati Temple?

Some of the major poojas that take place in the temple are Ganesh Chaturthi, Ganesh Jayanti, Magh Suddha Chaturthi, etc. Regular Prakshal Puja, Panchopachar Puja, and Shejaartis are performed.

The daily poojas and rituals include,

What is the significance of the Morgaon Ganpati Temple?

The significance of Morgaon Ganapati Temple is that a huge stone boundary encloses the place of worship with minarets at four corners of the temple. The four gates which depict four ages of life face a cardinal direction with an image of Ganesha. Each form relates to the aim of life. It is an Asthavinayaka temple and is made up of a single stone and the Garbhagriha houses a central image of the Lord facing the north direction.

The Morgaon Ganpati temple is the 1th temple in the Asthavinayaka Yatra.

The courtyard has two Deepmalas and a 6-foot mouse that sits in front of the temple. An enormous structure of Nandi faces the Lord on the outside of the temple gates. The space around the assembly hall contains 23 different idols symbolizing various forms of Lord Ganesha. Recently there is an assembly hall which is the home to the deities of Lord Vishnu and Lakshmi.

What is the history of the Morgaon Ganpati Temple?

The history states that there was a prominent Ganapatya saint named Morya Gosavi. He worshiped at the Morgaon Ganesha temple before relocating to Chinchwad. There, he built a new shrine. This temple along with other temples near Pune enjoyed royal patronage from the Brahmin Peshwa rulers.

According to Ganesha Purana, Lord Ganesha incarnated as Mayureshwar who had six arms and a white complexion. He was born in the Treta Yuga for the purpose of killing the demon named Sindhu. The Lord came down on a peacock mount and waged a battle against Sindhu and later defeated him.

Another significant Ganapatya legend states that Lord Brahma along with Vishnu, Shiva, the Divine Mother Devi, and Surya meditated at Morgaon to gain knowledge about their creator and the purpose of existence. Then Lord Ganesha appeared before them in the form of an Omkara flame and blessed them.

What are the festivals in Morgaon Ganpati Temple?

Here are some of the festivals celebrated at Morgaon Ganapati Temple:

Morgaon Ganpati temple witnesses the majority of its crowd from January to September, which is the festival period of the year for the temple.

Some other festivals observed in this temple include Shukla Chaturthi, Krishna Chaturthi, and Somavati Amavasya. All of these festivals depend on the positions of the moon and the sun. They usually take place between January to September.

How to Reach Morgaon Ganapati Temple?

Where to stay near Morgaon Ganpati Temple?

The temple guest house is not available without special recommendations but there are many good places to lodge near the temple grounds. For example, pilgrims traveling alone or on a limited budget can opt for dormitories or share rooms. And for people traveling with family, double to triple bedded rooms are also available.

From Rs 500 per night to Rs 5000 per night, a variety of hotels at different prices ranges are available. However, it is always advisable to book one’s accommodation in advance. One can also avail the free pickup and drop services of the hotels to avoid extra traveling issues.

Please carry a valid identity proof while making reservations at the hotel.

Where to eat near Morgaon Ganapati Temple?

In Morgaon, pilgrims can enjoy authentic Maharashtrian cuisine. Temple bhog is also available during the afternoon. The place surrounding the temple is stacked with both veg and non-veg food stalls. Many hotels to have their own personal restaurants where the food quality and quantity is great.

What are some temples near Morgaon Ganapati Temple?

1) Shree Khandoba Temple – Khandoba, otherwise called Khanderao, Khanderaya, Malhari Martand, and Mallu Khan is a local Hindu God. People worship him as Martanda Bhairava, a form of Shiva, primarily in the Indian Deccan Plateau. It is located at a distance of 103 km from Morgaon Ganpati temple.

2) Baleshwar Mandir – Rulers of Chand dynasty built this famous temple. It is at a distance of 284 km from Morgaon Ganpati temple. Devotees worship Lord Shiva as Baleshwar. Moreover, here are two different sanctuaries in the compound of Baleshwar. One for Ratneshwar and the other for Champawati Durga.

1)Girijatmaj Temple, Lenyadri: Goddess Parvathi performed penance at this place to have a child. Her prayers were answered when Lord Ganesh was born. The temple gets its name from the words Girija (Parvathi) and Atmaj (son). It is in Lenyadri, 87 km from the Vighneswar Vinayak temple

2)Siddhi Vinayak Temple, Siddhatek: Lord Vishnu appeased Lord Ganesh at this place before slaying the demons Madhu and Kaitabh. Lord Siddhi Vinayak is the only idol with the trunk pointing towards the right. It is in Siddhatek, 160km from the Girijatmaj Temple.

3)Ballaleshwar Temple, Pali: This temple is named after Lord Ganesh’s devotee Ballal. This is the only Ganesh Temple named after a devotee. It is in Pali, 180 km from the Girijatmaj Temple.

4)Varad Vinayak Temple, Mahad: Lord Ganesh is Varadha Vinayak, the Lord who grants boons and wishes. It is in Mahad, 146 km from the Girijatmaj temple.

5)Chintamani Temple, Theur:  Lord Ganesh retrieved the invaluable jewel – Chintamani from a greedy demon and gave it back to sage Kapila. The sage rewarded Lord Ganesh by placing it around Lord Ganesh’s neck. As a result, he was as Chintamani Vinayak. It is in Theur, 110 km from the Girijatmaj temple.

6)Vighneshwar Vinayak Temple, Ozar:  Lord Indra sent Vighnasur to disturb King Abhinandan’s prayer. The troubled devotees turned to Lord Ganesh who defeated the demon at this place. It is in Ozar, 87 km from the Girijatmaj temple.

7)Mahaganapati Temple, Ranjangaon: Lord Shiva worshipped Lord Ganesh here before proceeding to defeat the demon Tripurasura. It is in Ranjangaon, 86 km from the Girijatmaj temple.

What is the best time to visit Morgaon Ganpati temple?

Most festivals in the Morgaon Ganpati temple fall by January, so the best season to visit is between August to January.

Is the Morgaon Ganpati temple open on all days?

What are the darshan timings for Morgaon Ganpati temple?

Is there an entry free for Morgaon Ganpati temple?

No, there is no entry fee involved in the Morgaon Ganpati temple.

Is there a free parking space in Morgaon Ganpati temple?

Yes, there is a free parking space available.

No, photography isn’t allowed inside the temple grounds.

What is the nearest airport from Morgaon Ganpati temple?

The nearest airport to Morgaon Ganpati temple is the Pune airport less than 100 km away.

What is the temperature in Morgaon Ganpati temple during August/September?

The average temperature in Morgaon Ganpati temple during August/September is around 30 to 35-degree centigrade.

If you have any questions about Morgaon Ganpati temple, please leave your comment below and we will get back to you within one hour.

Join our Whatsapp group to get daily photos on temple darshans