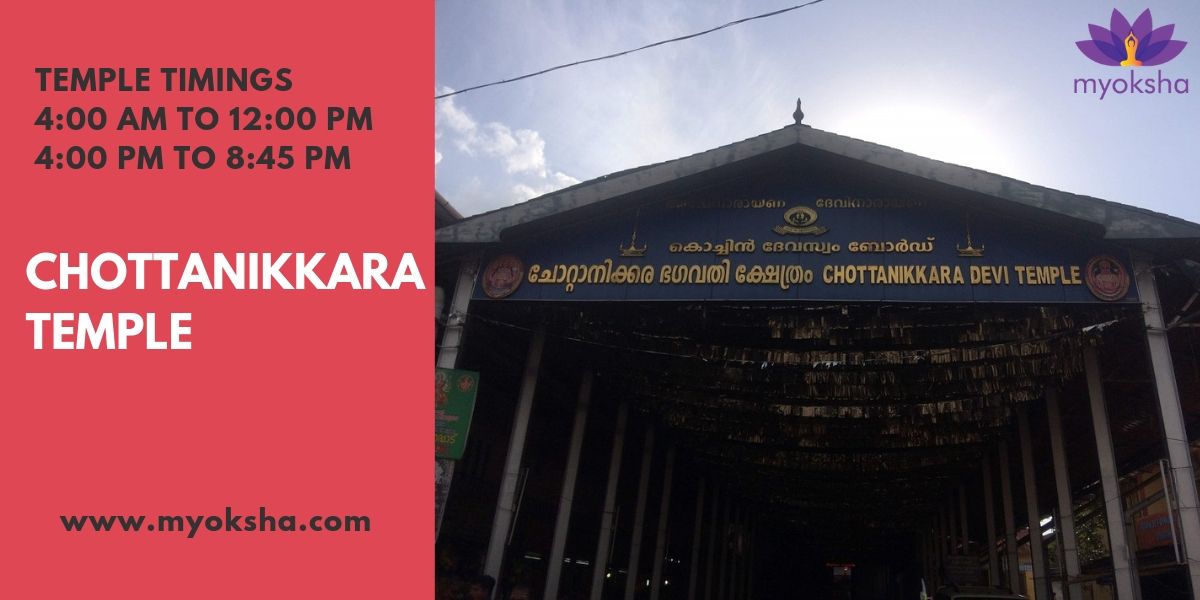 Chottanikkara Temple is located near Kochi in Kerala. Goddess Lakshmi is worshipped here. The Goddess is also known as Bhagavathy. The idol is 4 to 5 feet in height. She has four arms. The upper right arm holds the disc. The upper left arm bears the conch. The lower right hand is in a blessing pose and the lower left arm is in an Abhaya pose, which means fearlessness.

Here are the timings of Chottanikkara Temple:

Devotees can have food at the temple during the afternoon from 1 pm to 3 pm.

History and Legend of Chottanikkara Temple

Chottanikkara Temple is one of the oldest temples of Kerala. There are several legends related to the temple.

The temple is important in the religious history of Kerala due to the following reasons.

Poojas and Rituals at Chottanikkara Temple

Chottanikkara Temple is easily accessible from all parts of the country.

By Air: The temple is at 38 km from the Cochin airport. This international airport is well connected to the other airports of India, Singapore and Gulf countries.

By Road: The temple is at 20 km from the Eranakulam KSRTC bus stand. It is at 22 km from the Kaloor private bus stand. Road transport to the Chottanikkara Temple is economical. Deluxe Volvo buses are available which connect the temple to the different cities, like Chennai, Bangalore, Trivandrum, Hyderabad and Mumbai.

Chottanikkara Temple is very famous and hence there are several eat outs near the shrine. Black N White, Grameen Ruchi, Kettuvalam, Naushad the Big Chef, The Avenue Regent and the Deagle Arabian Hut are also near. Visitors can relish authentic Kerala cuisines here. These eateries also provide Asian, Chinese and other Indian cuisines.

There are several temples near Chottanikkara Temple.

Winters (December to February) is the best time to visit the temple as Chottanikkara has pleasant weather at this time. The place experiences heavy rainfall during the monsoons (June and July) and moderately hot from March to May. If you want to participate in the festivals of the temple then it is best to visit the temple between August and November.