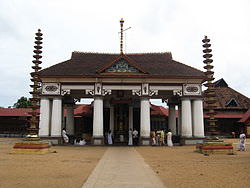 The Vaikom Mahadeva Temple has various stories revolving around its construction.

The temple is important in the history of Kerala with its wonderful architecture and rich history.

Everyday food is served after the afternoon worship. It is known as Nivedya.

This temple has some unique customs which takes place in no other temple.

Vaikom Mahadeva Temple is easily accessible from all parts of Kerala.

By Air: The closest airport is Cochin International Airport. It is about 76 km from the Kottayam district.

By Rail: The Vaikom Road Railway Station is the nearest rail line. The Kottayam is also not far. It is only 25 km from the temple.

By Road: The Vaikom Mahadeva temple is only 33 km from Ernakulam. Also, Kottayam is only 40 km from the temple. There are regular bus services from Kottayam, Ernakulam, Kozhikode, and Thiruvananthapuram to Vaikom. The Vaikom bus stand is on the Ettumanoor – Ernakulam Highway.

Vaikom Mahadeva Temple is very popular in Kerala. Hence there are many eat-outs near this shrine. Hotel Anandabhavan, Indian Coffee House, Hotel SNV Sadanam, Hotel Hari Hara Vilasam, Whitegate Residency and Valiyakavala are famous for food. These hotels are both economical and hygienic.

There are some important temples near the Vaikom Mahadeva Temple.

Hence the Vaikom Mahadeva Temple is a must-visit to know more about the Hindu religion. The temple is divine and as per belief, can fulfil wishes. Last but not least; enjoy some time boating over the clean waters of Vaikom Lake.