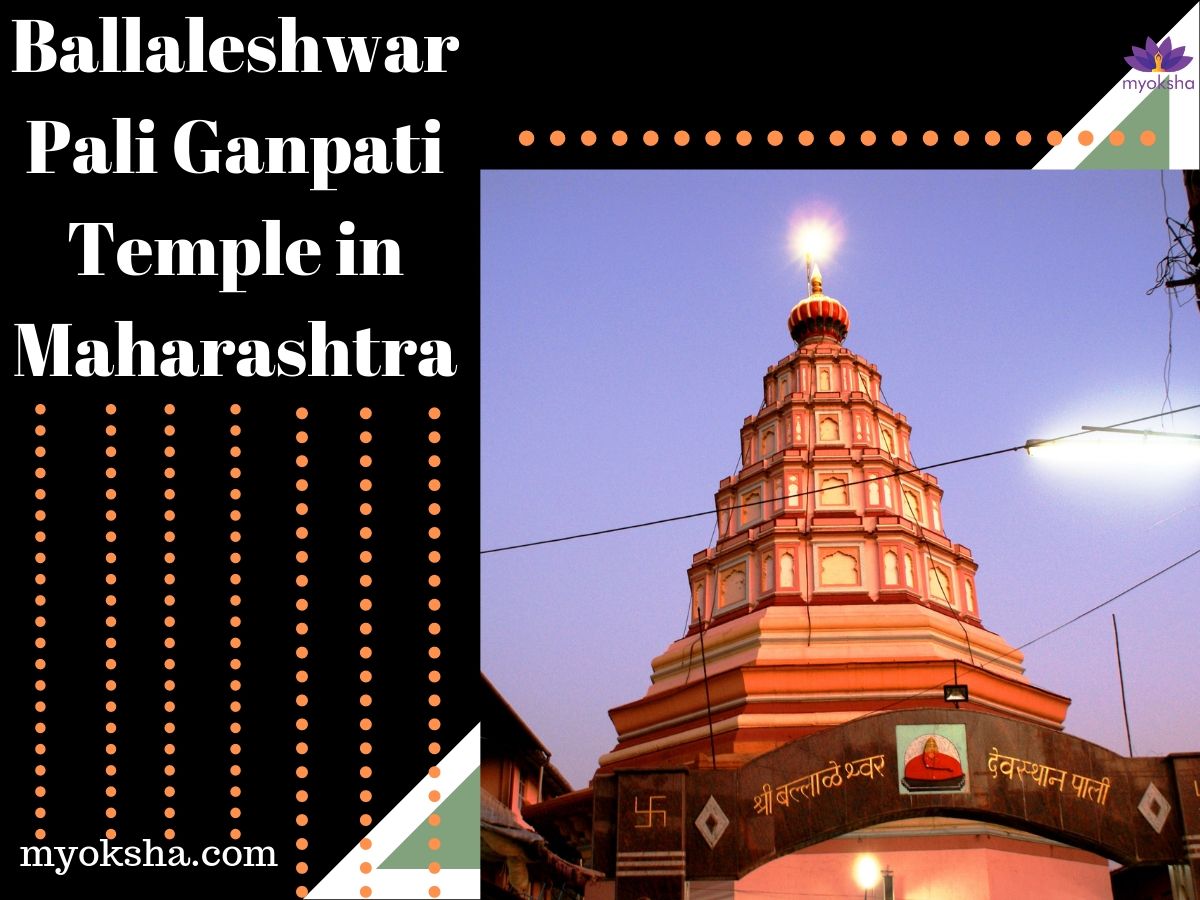 The timings for Pali Ganapati Temple are:

Men should wear dhotis to perform pooja in the sanctum of Ballaleshwar Pali Temple.

Which Sevas and Poojas are performed at Ballaleshwar Pali Ganpati Temple?

The following Poojas and Sevas are taken place at Pali Ganapati Temple:

What is the significance of Ballaleshwar Pali Ganpati temple?

The significance of Pali Ganpati Temple is that it faces east and is perfectly planned to ensure that the rays from the winter solstice’s rising sun fall directly on the main idol. The temple has two sanctums – the inner sanctum measuring 15 feet and the outer sanctum measuring 12 feet.

A devotee by name Krishnaji Narayan Pinge constructed eight pillars in 1910. The pillars are in the front of the temple and symbolize the eight directions. Lord Ballaleshwar’s idol is 3 ft tall and resembles the shape of a nearby mountain. Moreover, he is accompanied by his consorts Riddhi and Siddhi on either side.

The Dhundi Vinayak has a separate shrine and is one of the rarest idols to face west. Devotees worship the Dhundi Vinayak first. Also, the Pali Ganpati temple structure is of concrete with molten lead. Visitors can also see some of the construction equipment such as the churning wheel. The temple also includes two beautiful lakes.

A unique occurrence is said to take place on the 4th day of Bhadrapa, when Maha Bhog is offered to the temple’s deity, it is believed that the imprint of the deity’s fingers can be seen on the offerings.

What is the architecture of Ballaleshwar Pali Ganpati Temple?

The present temple’s development work is said to have been finished by Shri Phadnis of Moradabad. It was built in a way that the word श्री (Shree) would form and face the east so that the beams of the Sun would fall legitimately on the god. The primary fascination of this temple is the 15-foot high sanctum.

There are two Sanctums (Girbhagriha) in the temple. Internal sanctum is very huge and is 15 feet high. External sanctum is 12 feet high and it has a rat icon with a Modak in his grasp and facing Lord Ganesh. The Temple walls are made very solid by blending lead with concrete while construction.

Corridor of the temple is 40 feet long and 20 feet broad and it was built by late Shri Krishnaji Ringe in 1910 A.D. The Hall is extremely wonderful with 8 columns resembling Cyprus royal throne tree. The temple’s crest also known as Kalas is enhanced with a brilliant golden sheet which was offered by donations from devotees.

After vanquishing the Portuguese in Vasai and Sasthi, Chimaji Appa brought these bells and offered them at various Ashtavinayak places.

What is the history of Ballaleshwar Pali Ganpati temple?

The history of the Pali Ganpati Temple is that it is believed to be originally built in the 11th century. Moreshvar Vitthal Sindkar contributed to the construction of the temple in 1640. Also, it was originally made of wood and was renovated in the year 1760 by Moropant Dada Phadnavis.

Legend of Balleleshwar: According to Ganesh Puran, Kalyansheth was a successful businessman in Pallipur. His son Ballal was a devout child who spent most of his time praying and worshipping Lord Ganesh. Then, one day he invited all the children from his village for a special Pooja.

Ballal and his friends kept one large stone and worshipped it as Lord Ganesh. However, the children were so engrossed in their prayers that they did not return home for days. This irritated the villagers who complained to Kalyansheth. Then he came to the Pooja and destroyed the stone and tied Ballal to a tree as punishment.

Ballal cried and prayed to Lord Ganesh who appeared before him as a Sadhu. Ballal identified the Sadhu as the Lord himself and asked for his blessings. He also requested the Lord to always be with him and stay in this place. Hence, Lord Ganesh embraced Ballal and vanished into a stone. Then this stone became the Lord Ballaleshwar idol.

Legend of Dhundi Vinayak: The large stone which Ballal’s father Kalyansheth threw to the ground was known as Dhundi Vinayak. This is believed to be self-manifested or Swayambu and is worshipped before Lord Ballaleshwar.

It is customary to first pray at the Dhundi Ganapathy temple which is just before the main temple.

Which festivals are celebrated at Ballaleshwar Pali Ganpati Temple?

Some of the festivals celebrated at Pali Ganapati Temple are:

Where to stay near Pali Ganapati Temple?

Since Pali is a well-known pilgrimage site, several accommodation options are available to meet the needs of pilgrims. Moreover, the Ballaleshwar Temple charitable trust also runs a Dharamshala or Bhakta Nivas and provides accommodation at a nominal cost. There are 2 options for accommodation in the Bhakti Nivas with 24 Rooms & 2 Halls.

How to reach Pali Ganpati Temple?

Where to eat near Pali Ganapati Temple?

There are several eateries and restaurants in and around Pali. Devotees also partake the food provided at the Ballaleshwar Temple.

The twin forts of Sarasgad and Sudhagad, from the era of Chhatrapati Shivaji, are popular trekking destinations.

What are the sightseeing places near Pali Ganapati temple?

Here’s a list of some temples and attractions near Pali Ganapati temple:

The other Ashtavinayak Temples are:

Is there online booking available for Chintamani Ganpati Temple?

Can I drive from Mumbai to Ballaleshwar Pali?

Yes, the driving distance between Mumbai to Pali Ganpati Temple is 104 km. It takes approximately 1h 25m to drive from Mumbai to Pali.

Where can we stay near Ballaleshwar Pali Ganpati Temple?

There are more than 25+ hotels available in Ballaleshwar Pali route. The prices start at ₹3,000 per night. Moreover, there are Dharamshala or Bhakta Nivas that can be found in cheap rates.

What is the cheapest and easiest way to get from Mumbai to Ballaleshwar Pali Ganpati Temple?

The cheapest and easiest way to get from Mumbai to Pali Ganpati Temple is to drive which costs ₹750 – ₹1,200 and takes 1h 25m.

What is the nearest airport to Ballaleshwar Pali Ganpati Temple?

The nearest airports are in Mumbai and Pune at a distance of 105 km and 127 km.

What is the temperature in Ballaleshwar Ganpati Temple, Pali?

Where is the Dhundi Vinayak Temple situated?

The Dhundi Vinayak Temple is situated behind the main temple of Ballaleshwar Pali Ganpati Temple.

What is the significance of Dhundi Vinayak Temple?

The idol in this temple is believed to be Swayambhu. The idol of Dhundivinayak faces west. Devotees first visit this temple before going to the main temple.