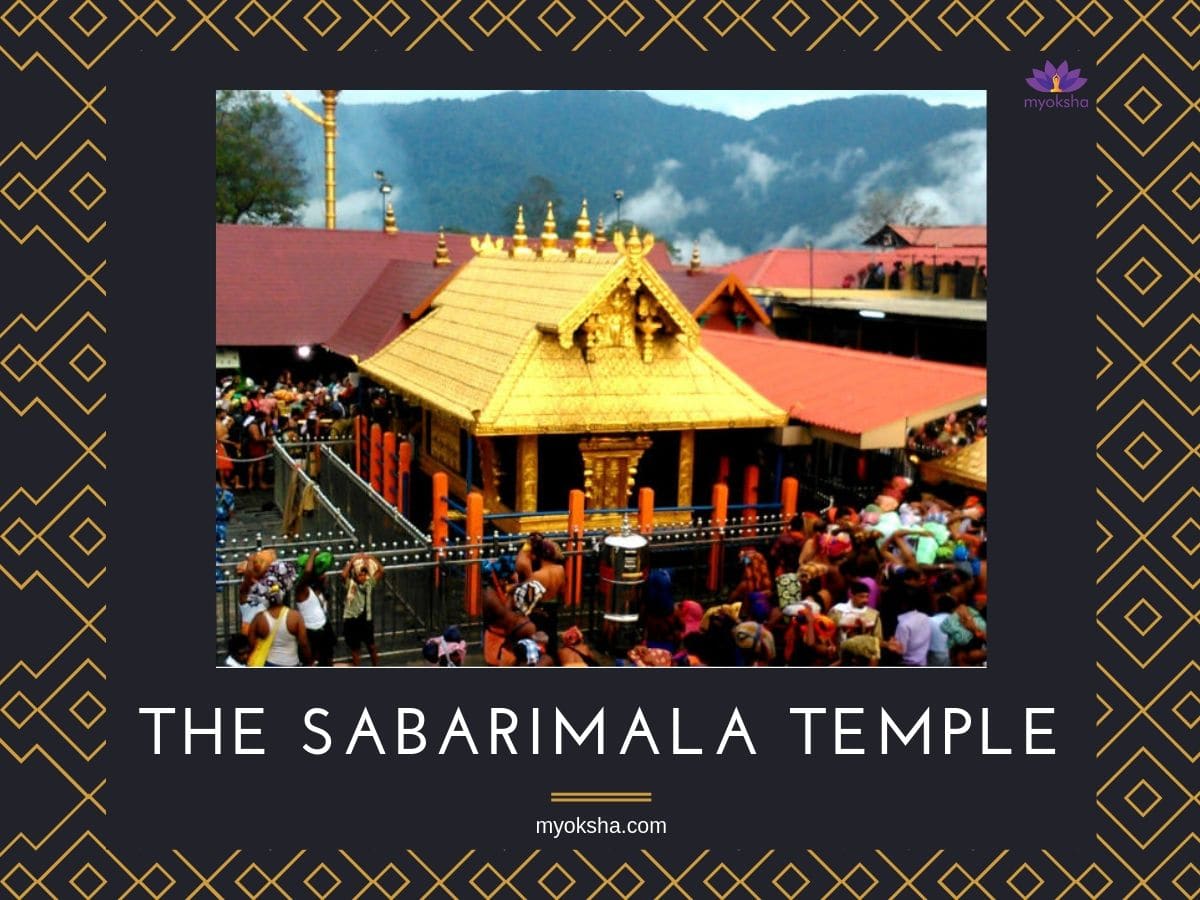 Dharmasastha Sabarimala Temple located at Sabarimala in the Pattanamthittu district of Kerala. It is one of the most visited pilgrimage sites in the world. The temple is dedicated to Lord Sastha, popularly known as Lord Ayyapan. The Sabarimala Temple is located at the peak of a hilltop named Sabarimala at an altitude of 1535 feet. The temple complex is surrounded by dense forests which have been converted into the Periyar Tiger Reserve. The forest is locally known as Poomkavanam.

Here are the opening and closing dates for Sabarimala Temple for 2019 – 2020.

The Sabarimala Temple can be visited by only men. Devotees who wish to get Lord Ayyapan’s blessings must fast for 41 days. They wear a black or blue dress, do not shave and smear Vibhuti or Chandan on their forehead. They wear a Rudraksha or Tulasi mala as a sign of fasting.  The devotees are required to abstain from non-vegetarian food, alcohol, tobacco, sexual intercourse, foul language, shaving, haircut, and nail trimming.

The Sabarimala Temple is also a fine example of the integration of the Buddhist religious beliefs with the Hindu system of worship. Historically, it is believed that a Buddhist shrine existed in the vicinity where the present temple is situated. The temple was dedicated to the Buddhist God Avalokitesvara, an avatar of Bodhisattva.

What are the timings of the Sabarimala Temple?

The Sabarimala Temple opens at 4:00 AM and closes at 11:00 PM. The temple also performs various rituals during this time. The devotees can be a part of these rituals, such as the morning, afternoon, and evening poojas. The temple remains closed from 1:30 PM to 4:00 PM.

The timings of the Sabarimala Temple are:

The temple is open to male devotees during the days of Mandalapooja, Makaravilakku (Makara Sankranthi), and Vishu. The temple also remains open on the first five days as per the Malayalam calendar.

What are the poojas and rituals at Sabarimala Temple?

What is the significance of the Sabarimala Temple?

The idol of the presiding deity is made of the special Panchaloha element. The Panchaloha is traditionally an alloy of five metals. The composition of the alloy was kept as a secret for several centuries and is often mentioned in the Shilpa Shastras. The metals involved were later found out to be a mix of Gold, Silver, Copper, Iron and Lead. It is believed that worshipping idols made of the Panchaloha material imparts balance, self-confidence, health, fortune and peace of mind.

The 18 steps that one has to climb to reach the main sanctum are extremely sacred to the devotees. They have been mentioned in several religious texts and several songs and bhajans have been composed about them. Several versions are present regarding the importance of the 18 steps. According to a popular belief, the first five steps represent the five senses (eyes, ears, nose, tongue and skin), the next eight represent the Ragas (Tatwa, Kama, Krodha, Moha, Lobha, Madha, Matsraya, and Ahamkara), the next three represent the Gunas (Satwa, Rajas, and Tamas) and the last two, Vidya and Avidya. It is believed that anyone who climbs these steps achieves self-realisation. Some also believe that the 18 steps denote the number of weapons with which the Lord annihilated Mahishi and some believe that each step represents each Purana.

It is believed that on the day of Makara Vilakku, Lord Dharmasastha stops his penance to bless the devotees visiting Sabarimala. Thousands of ardent devotees gather at Sabarimala to view the divine Makara Jyothi light up on the other side of the hill. Every year, the evening of Makara Sankranti witnesses the event of Makara Jyothi at the top of the Ponnambalamedu hill. The Makara Jyothi celebration has turned into a controversial issue as recent evidence point that the occurrence of the divine flame is actually manmade.

It is believed that the installation of the deity Lord Ayyapan was done by Parashurama himself on orders of Lord Dharmasastha.

The Sabarimala Temple Complex consists of a Ganapathi shrine, a Homakundam (place to conduct Homams), and a Bhasmakulam (sacred water tank). A small shrine dedicated to Devi Mallikappurathamma is situated at the foot of the hill along with the shrines of Nagaraja and Nagayakshi (God and Goddess of Snakes). The small shrine dedicated to Vavurswami is situated near the sacred 18 steps. Vavur was the Muslim friend and confidante of Lord Ayyapan.

The Sabarimala Temple is one of the largest annual pilgrimages taken by devout pilgrims throughout the country. It is estimated that about 40-50 million devotees visit the shrine during November – January season. The revenue from the temple is estimated at about 230 crores.

What is the history of Sabarimala Temple?

According to history, the Sabarimala Temple is believed to have been constructed somewhere during the 10th – 11th century. The earlier structure was a Buddhist shrine dedicated to Avalokitesvara. The shrine has consistently grown popular among the population especially among the southern states of Kerala, Tamilnadu, and Karnataka.

The story behind the temple:

A demoness named Mahishi possessed the boon of invulnerability, except by the son of Lord Shiva and Lord Vishnu. She started torturing public folk and created fear and panic among the residents of the Earth. Seeing the atrocities, the Gods prayed to Shiva and Vishnu to put an end to this. Lord Vishnu took the avatar of the beautiful enchantress Mohini and had a child with Lord Shiva. As per the Brahmanda Purana, this child would possess the combined powers of Durga and annihilate Mahishi. The Skanda Purana mentions that Goddess Durga herself took birth in a masculine form to annihilate Mahishi. Lord Vishnu gifted the child with a precious necklace pendant that hung around the child’s neck. Hence, he is also popular as Manikandan.

The legend associated with the Sabarimala Temple and the Lord’s journey on Earth starts with the decimation of the Pandyan dynasty of Tamilnadu. The remaining descendants left Madurai and settled at various locations throughout Tamil Nadu and Kerala. They established the Pandalam kingdom in Kerala around the tenth century. The King of the Pandalam kingdom, Raja Rajashekhara did not have a child for a long time and together with the queen, worshipped Lord Shiva for a boon. Lord Shiva obliged and ordered Dharmasastha to take an avatar and be born to them as a child. He was handed over a mission to annihilate the buffalo-headed demon Mahishi, the sister of Mahishasura, who was creating havoc in the earth realm.

Accordingly, King Raja Rajashekhara found the young baby crying on the banks of the River Pamba. A Sanyasi appeared to him and advised him to give the child home and raise him as his own. He told him that when the child becomes 12, his divine nature will be revealed. The King and the Queen were very pleased and grew the child as their own. The child was named Manikandan and was taught the local martial arts form and all the Shastras. In the meantime, the Queen gave birth to another child named Raja Rajan. However, the King decided to make Manikandan the king.

The Diwan of the Kingdom brainwashed the queen into feigning a sickness so that her child becomes the King instead of Manikandan. The physician gave a false assurance that tigress’s milk was the only cure for the Queen’s sickness. Manikandan decided against his father’s wishes, that he will go into the forest to bring a tigress’s milk. On entering the forest, he decided to annihilate Mahishi first. He entered into a conflict with the demon along the banks of the Azhutha River. Manikandan climbed on her chest and danced violently. Realizing the futility of battling against the avatar of Lord Vishnu and Lord Shiva combined, the demon prostrated and died.

After killing Mahishi, all the Gods led by Lord Shiva appeared to Manikandan and turned themselves into tigers and tigresses. They accompanied him to the palace. On his return, the Sanyasi appeared and revealed the true identity of Manikandan to the King and the public. King Raja Rajashekhara was overwhelmed with joy and asked Manikandan to stay with him forever. However, Manikandan refused. Then the King requested him to guide him to a place where he could construct a shrine for him as a memory. Manikandan shot an arrow which fell at Sabari, the hill where aeons ago an old woman named Sabari had performed penance and was visited by Lord Rama. Manikandan ordered the shrine to be built there and promised that he will bless his devotees from there. He later disappeared into the forests.

The legend of Makara Vilakku is related to Lord Rama and Lakshman. On their journey towards Lanka, they met a tribal named Sabari at the present day Sabarimala. Sabari offered the Lord, fruits that she was carrying with him. While eating the fruits, Lord Rama observed a divine person doing penance. On enquiring the tribal about the person, he informed that it was Sastha. Lord Rama went to meet Sastha. On seeing the arrival of Lord Rama and Lakshman, Sastha stood up and received him to his abode. The day is celebrated as the Makara Vilakku day.

What is the dress code of Sabarimala Temple?

The Sabarimala Temple follows a very strict dress code for men who wish to seek the blessings of the Lord. One must not wear any upper garment like shirts or vests. One must wear a black, orange, or dark blue dhoti to view the Lord. Ladies between the ages of 10 – 55 are not allowed to visit Sabarimala. Ladies above the age group should wear a saree inside the temple premises.

What are the festivals celebrated at Sabarimala Temple?

How to reach Sabarimala Temple?

Vehicles are allowed only until Pamba, 5 km before the main shrine. The new route is comfortable and easy to traverse.

However, many devotees still trek through the long and difficult older route through Erumeli. The distance from Erumeli to Sabarimala is roughly 60 km.

Where to stay near Sabarimala Temple?

The Sabarimala Temple Administration operates a pilgrim complex at Nadapanthal and Pandyathavalam. Several guesthouses have been constructed by them to meet the needs of the devotees. The rooms are clean and hygienic and can be booked at nominal rated by visiting their official website.

Where to eat near Sabarimala Temple?

A lot of small hotels have been set up near the base of the Sabarimala hills and at Pamba by the Sabarimala Temple administration. The cuisine provided is pure vegetarian and South Indian.

What are some temples near Sabarimala Temple?

Is the Sabarimala Temple open throughout the year?

The entry to the Sabarimala Temple is free of cost.

Is there an age restriction in the Sabarimala Temple?

There is no age restriction for men. However, ladies from the ages of 10 to 55 are not allowed inside the temple.

Yes. There are facilities for specially-abled and senior citizens such as palkis.

The summers in Sabarimala starts from April and continue until June. The summers here can be very hot and humid. Temperatures during the daytime often go up to 38 º C.

If you have any questions about The Sabarimala Temple, please leave a comment below, and we will get back to you within one hour.