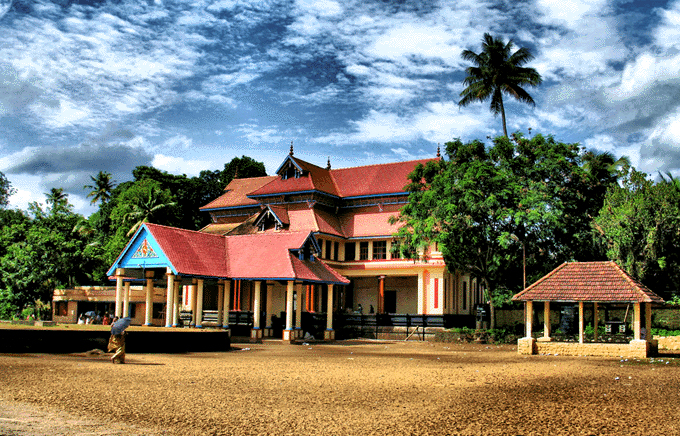 Chengannur Mahadeva Temple is a ‘Maha Kshetram’ (temple having great importance) from olden days itself. The other sub-investitures of the temple are Ganapathi, Shasta (Lord Ayyappan), Chandikeswaran, Neelagrivan, Ganga, and Naagar. There is also a shrine of Sree Krishna nearby. Chengannur Mahadeva Temple is also referred to as Chengannur Bhagavati Temple, as the temple is one of the 108 Shakti Peethas dedicated to Goddess Parvathi.

Chengannur is also known as the Gateway to Sabarimala Temple. The temple was built according to the architectural design developed by Perumthachan. Chengannur Mahadeva Temple complex sprawls over an area of six acres, with a circular sanctum. The Shivalingam is said to have emerged on its own (Swayambu) and bears a gold planted image of Ardhanaareeswara. There are also shrines dedicated to other deities as well.

Chengannur Mahadeva Temple opens daily at 3:50 AM. Worship timings are from 04:30 AM to 11:30 AM in the morning and from 5:00 PM to 8:00 PM in the evening. The temple timings are subjected to change during festivals and special events.

Varshikotsavam: The annual temple festival is observed for 28 days starting from Thiruvathira Nakshatram in Dhanu Masam to Thiruvathira Nakshatra in Makaram month. Special pujas are held on all days. The shrine is traditionally decorated with plantain, coconut leaves, flowers, leaves, traditional lamps and lights. Traditional performing arts, music and dance are staged during the period. The utsava murti of the deity is taken out of the shrine for ritual bathing on the final day. Hundreds of people arrive on the day to witness various rituals and festivities.

Thripputhu: Thripputhu is one of the main festivals celebrated in the temple. The festival is associated with the menstruation ceremony and is observed periodically in the temple. During this time the temple is kept closed for three days and worships will be offered to another image of the goddess in a different spot of the temple. On the fourth day, the idol of the Devi is taken to a nearby river on the fourth day and Arattu (holy bath) is conducted. This ceremony is called Thripputhu. Later the Devi rides an elephant and is taken back to the temple. During the festival, the idols of Lord Shiva and Goddess Parvati are taken in procession around the temple three times. Then the Lord enters the shrine through the eastern side and the goddess enters through the western side.

Thulasamkrama Neyyattu: This is the Ghee Abhishekam festival of the Chengannur Temple. This ceremony is conducted on every 1st day of Thulam (mid-October to mid-November). On this day 36 paras of ghee is showered on the ‘Shivalingam’. ‘Paras’ is a measurement in Malayalam.

Shivaratri: Maha Shivaratri is the night of the worship of Lord Shiva. It occurs on the 14th night of the new moon during the dark half of the month of Phalguna. It falls on a moonless February night when Hindus offer special prayer to the lord of destruction. Shivaratri is considered especially auspicious for women. Married women pray for the well being of their husbands and sons, while unmarried women pray for an ideal husband like Shiva. Devotees visit the temple in large numbers during Shivaratri.

At 3:50 AM the first pooja that is conducted is the Ravile Palli Unarthal. It is nothing but the awakening of the presiding deity. It is followed by the Nadathurakkal which means the opening of the sanctum sanctorum to enable the devotees to venerate the holy portrait of the deity and to seek their blessings.

Shiva Abhishekam is usually performed to a Lingam representing his manifestation as a creator of good (by destroying evil). The first worship of the day is Usha pooja or pooja at dawn. Though generally, the time of Usha pooja is thirty minutes after the sunrise.

Panthiradi Pooja is done only in major temples. This is done 2 hours after sunrise. It denotes the time of pooja based on human shadow measuring 12 feet in the morning. Here abhisheka is done with the pure water taken in nine pots after detailed pooja.

Deeparadhana is the worship with lamp with lamps, performed at dawn and dusk. Pyramidal lamps with seven tiers, lamps with five wicks and plain lamps with a single wick are lightened and waved several times in front of the Lord, from head to foot. Similar waving is then done with lighted camphor.It is considered to be an auspicious act to pray during deeparadhana time. This is the last pooja conducted in a temple on a day.  This is done between one and two hours after sunset.

By Road: Chengannur is situated between Thiruvalla and Pandalam in Main Central Road. Chengannur Bus Stand is a major KSTRC bus station in Alappuzha District. It is one kilometre from Chengannur Mahadeva Temple. Regular bus services are available from Aranmula, Thiruvalla (10 km), Pandalam, Pathanamthitta, and Trivandrum.

By Train: The nearby railway stations are Chengannur, which is about 2 km, Thiruvalla about 10 km and Changanassery about 18 km. Some of the major trains passing through the station include Kerala Express, Hyderabad Express, Kanyakumari Express, Chennai Mail, Amritha Express, and Malabar Express.

There are many hotels nearby which offer deluxe rooms. They are equipped with modern amenities to make the guests stay comfortable and enjoyable.

There are many restaurants that offer some great food. One should really visit Oven Fresh Family Restaurant, Bafia Bakers, Food Palace Restaurant, Crupe Cafe, Joyces baker to taste some mouth-watering and tasty food.

Thiruvalla Sreevallabhaswami Temple: Sree Vallabha Temple is located at Thiruvalla in Pathanamthitta district of Kerala. It is a 400-year-old temple on the banks of the River Manimala. This ancient majestic temple devoted to Lord Mahavishnu is one among the 108 abodes of Lord Vishnu. There is a big pillar made out of a single piece of stone at the western side of the temple and an idol of Lord Garuda Bird is placed on its top. The building structure there is called as ‘Garuda Madathara’ and it has a Nepal style. There is Garuda Bird as sub deity in this temple. The deity of Sree Vallabha Swamy is facing east and in the same ‘Sudarshana Chakra'(Sudarshana Discus) is consecrated facing west and is known as ‘Chakrathazhvar’.There is an offering in this temple known as ‘Paala Namaskaram’ which will help to get blessings from Lord to fulfil the devotee’s wishes. The offering of ‘Kathakali’ to be performed in the temple is another special ritual here.