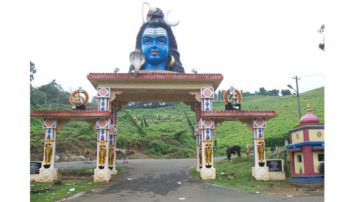 Nilakkal Mahadeva Temple is situated about 15 km east of Pampa in Kerala. The holy river Pamba flows through the northern part of Nilakkal. During Sabarimala pilgrimage, lots of devotees visit this temple. It is believed that Lord Ayyappa on his way to the forest to eradicate the demon got the blessings from his father Haran from Nilakkal Mahadeva Temple.

Pilgrims on their way to Sannidhanam seek the blessings from Nilakkal Mahadeva Temple. The deity here is believed to be in two moods fierce Ugramoorthy and auspicious Mangala Pradayakan. It is also believed that Lord Siva showered blessings to his son lord Ayyappa to fight against all evil spirit and save the people. There is also a Devi temple (Palliyarakkavu Devi Kshetram) near to Shiva temple. Lord Parameshwaran, Lord Kannimoola Ganapathi and Nandi are the three Prathishtana here.

Significance of the Nilakkal Mahadeva Temple

Sivaratri: Puranas contain many stories and legends describing the origin of this festival. During the samudra manthan, a pot of poison emerged from the ocean. This terrified the Gods and demons as the poison was capable of destroying the entire world and they ran to Shiva for help. To protect the world from its evil effects, Shiva drank the deadly poison but held it in his throat instead of swallowing it. This made his throat turn blue, and he was given the name Neelakantha. Shivaratri is the celebration of this event by which Shiva saved the world. Shivaratri is one of the holiest nights of the year. It is the night dedicated to the worship of Lord Shiva.

Not eating too much, eating light and doing more meditation on this day helps in fulfilment of desires. Shivratri day is celebrated with Rudrabhishekam, singing of the ancient Vedic mantras. It is accompanied by a ceremony of washing the Shiva Linga with milk, curd, honey, rose water, etc.

Navratri: During Navratri, people from villages and cities gather to perform puja on small shrines representing different aspects of Goddess. A different form of the goddess is worshipped each day. Following the nine days of rituals and worship, the 10th day is celebrated as Dussehra. It is also known as Vijaya Dashami. It is celebrated to mark the victory of mythical King Lord Rama over the King of Sri Lanka, Ravana. People undergo rigorous fasts during this season that lasts for the nine days of Navratri.

The festival culminates on Mahanavami. On this day, Kanya Puja is performed. Nine young girls representing the nine forms of Goddess Durga are worshipped. Apart from the Navratri in September – October, there are three other Navratri in a year. The most important among the three is the Chaitra Navratri or the Navratri in March-April. This is also known as Vasant Navratri or Ram Navratri. Many devotees visit the temple to seek the blessings of the Lord.

Vinayak Chaturthi: Ganesha Chaturthi is also known as ‘Vinayak Chaturthi’ or ‘Vinayaka Chavithi’. It is the day when all Hindus celebrate the birthday of Lord Ganesh. Sweets especially laddoos and sugary modaks, which are a favourite of the Ganesha are distributed. The festival of Ganesh Chaturthi is observed on the fourth day of Bhadrapad Shukla Paksha, of the Hindu lunar month of Magh. It is believed that Lord Ganesha was born on the fourth day of the bright fortnight of Magh. And establishing an association between Ganesh and Chaturthi (four). A ritual known as Pranapratishhtha, that involves chanting of mantras by the priest, is a common sight during the occasion.

Usha pooja: The first worship of the day is Usha pooja or pooja at dawn. The time of Usha pooja is thirty minutes after the sunrise.

How to reach Nilakkal Mahadeva Temple?

By Road: Mannarakulanji – Chalakayam route (SH 67) is the main highway passing through Nilakkal and also the Adoor. Vandiperiyar highway passes through Plappally which is 8 km west to Nilakkal. During Sabarimala pilgrimage, state-owned K.S.R.T.C buses provide chain services from Pamba to Nilakkal at fair charges for the devotees. Private busses only operate through nearby places like Angamoozhy and Thulappally. Transportation is comparatively less in this region.

By Rail: The nearest railway stations are Chengannur which is about 68 km and Thiruvalla which is 73 km.

There are many hotels and guest rooms available that offers contemporary rooms and suites. They offer brilliant overall design, facilities and dining options. They are the centre point for a number of tourist destinations.

One of Kerala’s popular attractions is its delicious Kerala cuisine. Various locally available vegetables such as tapioca, cassava and yam form part of the cuisine of Kerala. Seasonal fruit such as papaya, jackfruit, mangoes and lime are eaten at different times of the year. Bananas and coconut are available year-round and are a staple of the Kerala diet. The refreshing juice of the tender coconut is a delightful drink, which you can enjoy on Kerala Tours with Kerala Backwater. There are many restaurants nearby that offer some amazing food for the tourists.

Pathanamthitta is an important pilgrim hub and thus is always flanked by devotees and nature lovers. For its tourists, the town offers several restaurants and eating joints all across the town. You will also find some nice Christian restaurant which serves alcohol and Syrian Christian food. Other than that, South Indian cuisine is the predominant cuisine of the town.

Thazhoor Bhagavathi Temple: The temple is devoted to Sri Bhadra Devi (santham).This temple is the incarnation of Sri Parvathi who is the chief deity. Thazhoor Bhagavathy Kshetram is a 300-year-old Hindu temple. It is located on the banks of the Achankovil river in Vazhamuttom. The temple is also famous for the folk arts and the Kettukaazhcha procession with Kaala. Three glorious hundika towers are lately built around the periphery of the temple. Bharani is considered as the birth star of the Thazhoor bhagavathi. The Bharani star came in Makaram, Kumbham, Meenam and Medam are celebrated in a grand manner. The temple is having very huge and glorious surroundings with scenic beauty. It is having a large and glorious Aanakottil. It has a boundary wall and towered entree with full of handicraft and sculptures both in stone and wood.

Kodumthara Subramaniyam Temple: Kodumthara Sri Subrahmanya Swamy Temple is located near Pathanamthitta. The annual pooyam ritual organized in at the Murugan Temple attracts hundreds of devotees. The shrine is dedicated to Subramanya or Muruga. Carrying Kavadi is the main ritual on the day. People carry various types of Kavadi to the temple in a procession. Traditional temple music is part of the procession. Unlike numerous Kerala temples, this one is well-known for its traditional architecture with well-defined conical-shaped roofing over the Srikovil. On the Pooyam day, people also pierce their body with a small lance or vel. This is done for getting desires fulfilled.

Bhagavathikunnu Devi Temple: One of the important and famous Goddess Abode in Thiruvitamkoor is the Bhagawati Kunnu Devi Temple. It is said that the Devi Vilippurathamma stood as the protector for the passersby and the bullock carts that cross the dangerous route. Some of the main attractions of the temple are a stone statue of Lord Krishna, the sanctum sanctorum, obeisance courtyard, sub gods and goddesses. The sub gods are Ganapati, Yakshi, Rakhshas  Valyacchan, Naga Rajavu and mala nada. The first flag hoisting ceremony was conducted on  24th February 1999 with much fanfare through the 10-day festivities. Padayani festival was also first celebrated then and continues to be celebrated every year on the day of Maheeram Star in the Malayalam month of Kumbham.

Anikkattilamma Temple: Mallappally Anikkattilamma Shiva Parvati temple is situated in Anicadu village. Agnimahakalan and Agniyekshi are symbolized in these idols. The temple is believed to date back to 1600 years during the early days of Edappally dynasty. It is situated by the bank of river Manimala. The temple is dedicated to Goddess Shakti. The ever flowering Kanikonna located in the courtyard of the temple. It gives flower offerings to the Lords every day in all seasons throughout the year. Mallappally Anikkattilamma Shiva Parvati temple celebrates its yearly festival (Utsavam) for eight days during the month of Kumbham. It concludes on the day of Pooram star which is believed to be Devi’s birthday.  Other deities such as Lord Bhadra, Lord Nagaraja, Goddess Yekshiamma and Rekshas are also worshipped here.