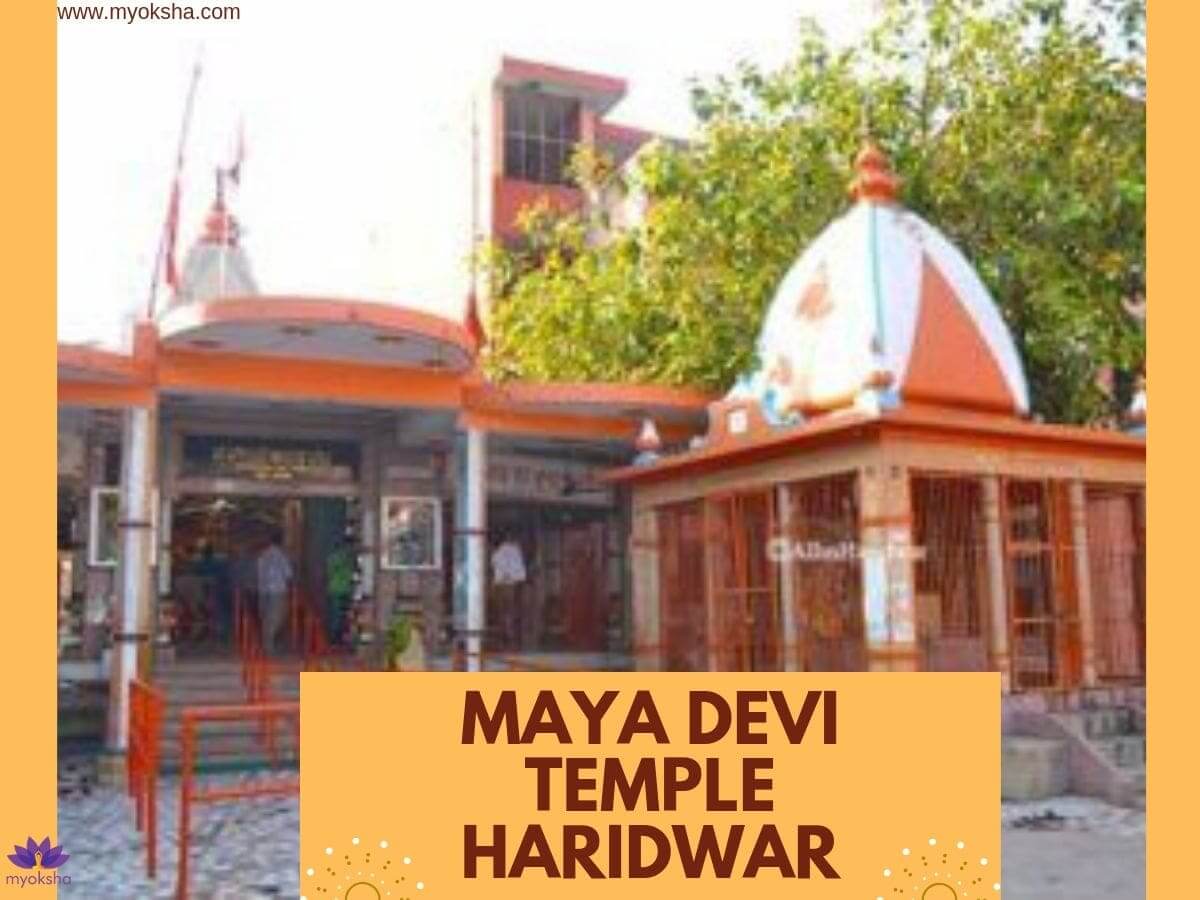 Maya Devi Temple is a Hindu Temple dedicated to Goddess Maya in Haridwar, Uttarakhand. Goddess Maya is an incarnation of Goddess Shakti and is the Adhisthatri of the city. The temple is one among the three prominent Siddha Peetha in Haridwar. The Chandi Devi temple and the Mansa Devi temple being the other two of the trio.

It is a popular belief that the goddesses of the Siddha Peethas fulfil the desires of her sincere devotees. This temple is also among the Char Dham Yatra package within Uttarakhand.

Planning to visit this temple? Have a look at our Char Dham Yatra Tour Package.

What are the timings of Maya Devi Temple?

What is the significance of the Maya Devi Temple?

The significance of Maya Devi Temple relates to the main deity, Goddess Maya, who has three heads and four arms. The inner shrine of the temple consists of the idols of the three forms of Goddess Shakti. Goddess Maya commands attention in the centre, with Kali Mata on her left and Kamakhya on her right. A pradakshina path around the sanctum sanatorium of the temple has illustrations of the ten Dash Mahavidayas. This makes this shakti peetha an important pilgrimage destination in Shaktism.

What is the history of Maya Devi Temple?

According to history, Haridwar was formerly called ‘Mayapuri,’ named after the city’s guardian deity, Goddess Maya. The Maya Devi Temple is one of the three ancient temples which dates back to the eleventh century. The Narayana-Shila and the Bhairav temple are among the other two undamaged temples of the same era.

Sati was an incarnation of Goddess Adishakti, born as a blessing to Prajapati Daksha and Queen Prasuti. Goddess Shakti took birth as human to reunite with her consort, Lord Shiva.

Coming of age, Sati was mesmerised by Lord Shiva and wished to marry him. Daksha, however, was enraged by Shiva as he cut off one of Lord Bramha‘s five heads. As a bid to avenge his father’s beheading, Daksha refused to give Sati’s hand to Shiva for marriage. Eventually giving in to wishes of the Gods, Sati and Shiva were wed.

A yajna, organized by Daksha, soon after the wedding saw him invite all the gods and goddesses with an exception of Sati and Shiva. Since Sati was Daksha’s daughter, she did not feel the need for seeking an invitation. She attended the yajna despite Shiva’s warnings.

The yajna saw Daksha’s insolence when he disrespected Lord Shiva. Humiliated and unable to hear impolite remarks against her husband, Sati immolated herself. Goddess Shakti left the body.

What are the festivals celebrated at Maya Devi Temple?

A major festival celebrated in the temple is Navratri.

Navratri or Durga Puja: It is a famous festival, celebrated as a symbol of victory of good over evil. As per legend, Goddess Durga defeated the demon king Mahishasura to save the world and restore Dharma. Navratri is celebrated across India for nine days. Celebrations in the temple include stage decorations, recital of the legend, enacting of the story, and chanting of the scriptures of Hinduism.

How to reach Maya Devi Temple?

Where to stay near Maya Devi Temple?

Some of the places where one can stay near Maya Devi Temple Haridwar while undertaking the Char Dham Yatra are:

What are some temples near Maya Devi Temple?

Some of the temples near Maya Devi Temple Haridwar are:

Is the Maya Devi Temple open throughout the year?

Yes, the Maya Devi Temple is open all 365 days of the year.

What is the entry fees?

The entry to the Maya Devi Temple is free.

When is the best time of the year to visit the Maya Devi Temple?

Although you can visit the temple any time of the year, ideally, February, March, August, September, and October are the best times to visit the Maya Devi Temple.

Mansa Devi Temple is 2.4 km from the Maya Devi Temple and it takes approximately 11 minutes to travel via Haridwar Industrial Area.

Chandi Devi Temple is 2.4 km from the Maya Devi Temple and it takes approximately 6 minutes to cover the said distance via NH34.

When is the Maya Devi Temple most crowded?

Maya Devi Temple is the most crowded during the Navratri season.

The temperature during summers is mild and ranges from 35º C to 45º C. It is advisable to carry cotton clothing in summers.

Weather in winter is very unpredictable. The temperature varies from 10º C to 30º C. It is therefore advised to carry warm, woolen clothing as winters can get very cold here.

Which is the nearest airport to Haridwar?

The Jolly Grant Airport in Dehradun is the nearest airport to Haridwar. It is 36 km away.

Which is the nearest railway station to Haridwar?

If you have any questions about the Maya Devi Temple, please leave a comment below, and we will get back to you within one hour.