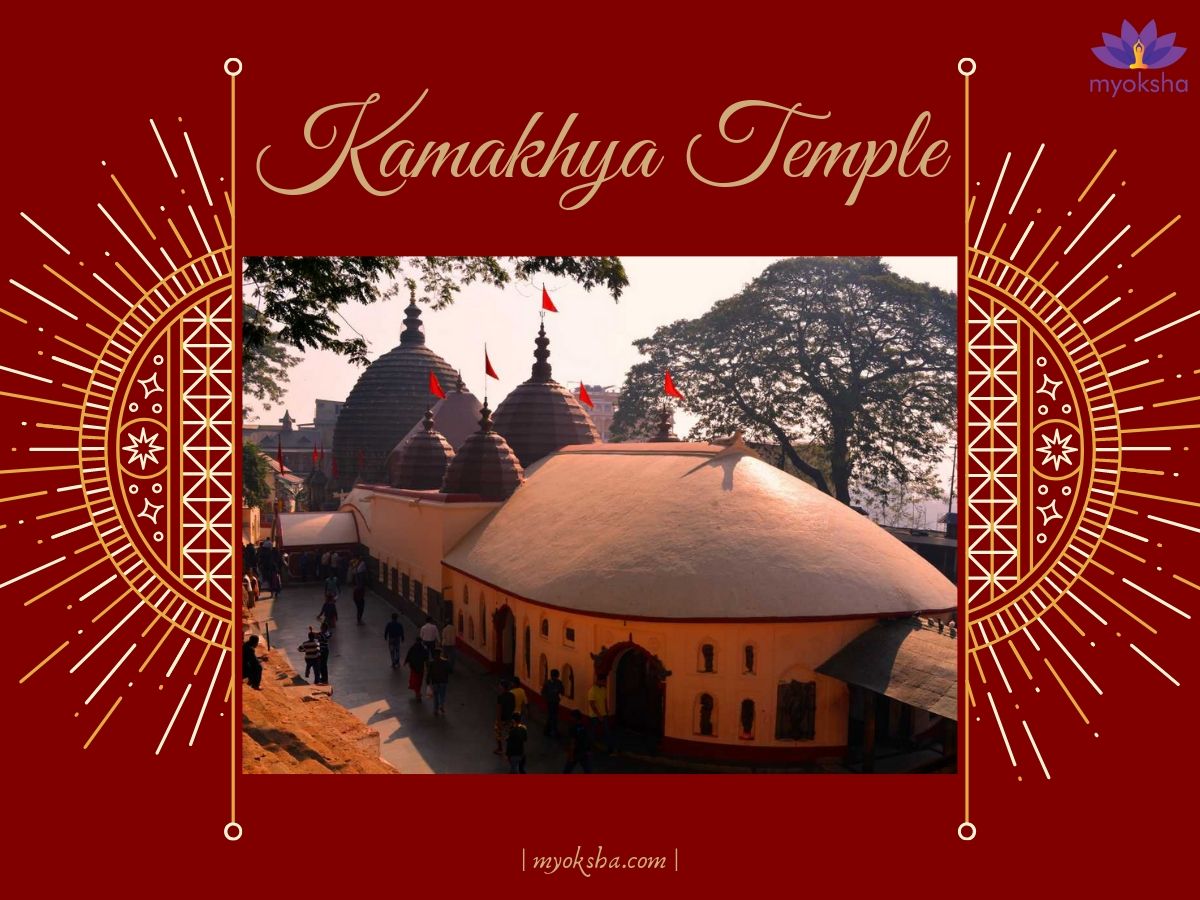 Kamakhya Temple is a Hindu temple in dedication to Goddess Kamakhya, in the state of Assam. It is one of the oldest among the 51 Shakti Peeths.  This holy temple is present at the top of the Nilachal Hill which is about 800 feet above sea level in the Western part of the city of Guwahati. At a corner of the cave in the temple, there is a sculptured figure of the yoni of the Goddess, which is worshipped. The presence of the natural spring keeps the statue moist.

There are ten small temples present around the premise of the main shrine. These are for the ten avatars of Maa Kali, namely, Goddesses Dhumavati, Bagola, Tara, Matangi, Bhairavi, Kamala, Chinnamasta, Bhuvaneshwari as well as Tripura Sundari.

History and Legend of the Kamakhya Temple

According to the history of Kamakhya Temple,  Sati, the daughter of King Daksha married Lord Shiva against his will. The King had organized a Yajna in his kingdom where he invited everyone except Sati and Shiva. Sati was upset but wanted to attend it in spite of Shiva’s disapproval.

At this Yajna, she was greatly insulted by King Daksha. Sati became so angry that she jumped into the Yajna fire and killed herself. When Lord Shiva came to know about this incident, he took Sati’s body on his shoulders and roamed around the universe filled with rage. It is then; Lord Vishnu calmed Shiva and saved the world by cutting the body of Sati into several parts by using the Sudarshan Chakra.

Sati’s body parts fell at different places which became popular as Shakti Peeths. In the famous Kamakhya Temple, devotees worship the womb and the vagina of the Goddess.

It is said that the Goddess of Love, Kamadeva suffered a loss of virility, owing to a curse. Kamadeva sought out the Shakti’s womb and genitals which freed him from the curse. Love gained its potency here and the idol of ‘Kamakhya Devi’ was set up and worshipped.

Significance of the Kamakhya Temple

The significance of the Kamakhya Temple is that Kamakhya Devi is also called as the Bleeding Goddess. The mythical womb and the genitals of Shakti are present in the ‘Garbhagriha’ of the temple. The architecture of  Kamakhya Temple consists of four sections called the Garbhagriha.

In addition, it has three mandapas namely, Calantha, Pancaratna, and Natamandira. Calantha or the western chamber is large and rectangular in shape. This is not used by the general pilgrims for worship. The middle chamber or Pancaratna is square in shape and has a small idol of the Goddess. The last chamber or Natamandira consists of sculpted figures of Naranarayana along with related inscriptions and other gods.

In the month of June, it is said that the goddess bleeds. During this time, the Brahmaputra River near the temple turns red in colour. It might be strange but till this date, there has been no scientific reason as to why the water of the spring turns red. Menstruation is the symbol of a woman’s creative ability. And the Kamakhya temple celebrates this ‘shakti’ present in every woman.

Timings of the Kamakhya Temple

Here are the timings of Kamakhya Temple:

Some of the festivals celebrated at Kamakhya Temple are:

Routes to the Kamakhya Temple

Here’s how to reach Kamakhya Temple:

Accommodation near the Kamakhya Temple

The Assam Development Corporation has its own tourist home called as Lalita Kanta Yatri Niwas. It offers excellent lodging as well as a food facility. While the cost of the rooms is moderate, all kinds of modern amenities are present for the visitors to use as well.

Moreover, the presence of many luxuries and budget hotels is also present for travellers at the Nilachal Hills. From lodges to guest homes and a temple run guest house, visitors have lots of choices. One can also decide to put up at Guwahati and travel to the temple by availing public transportation like buses, auto-rickshaws and taxis.

Places to visit near the Kamakhya Temple

Some of the temples near Kamakhya Temple are:

If you have any questions about the Kamakhya Temple, please leave a comment below, and we will get back to you within one hour.