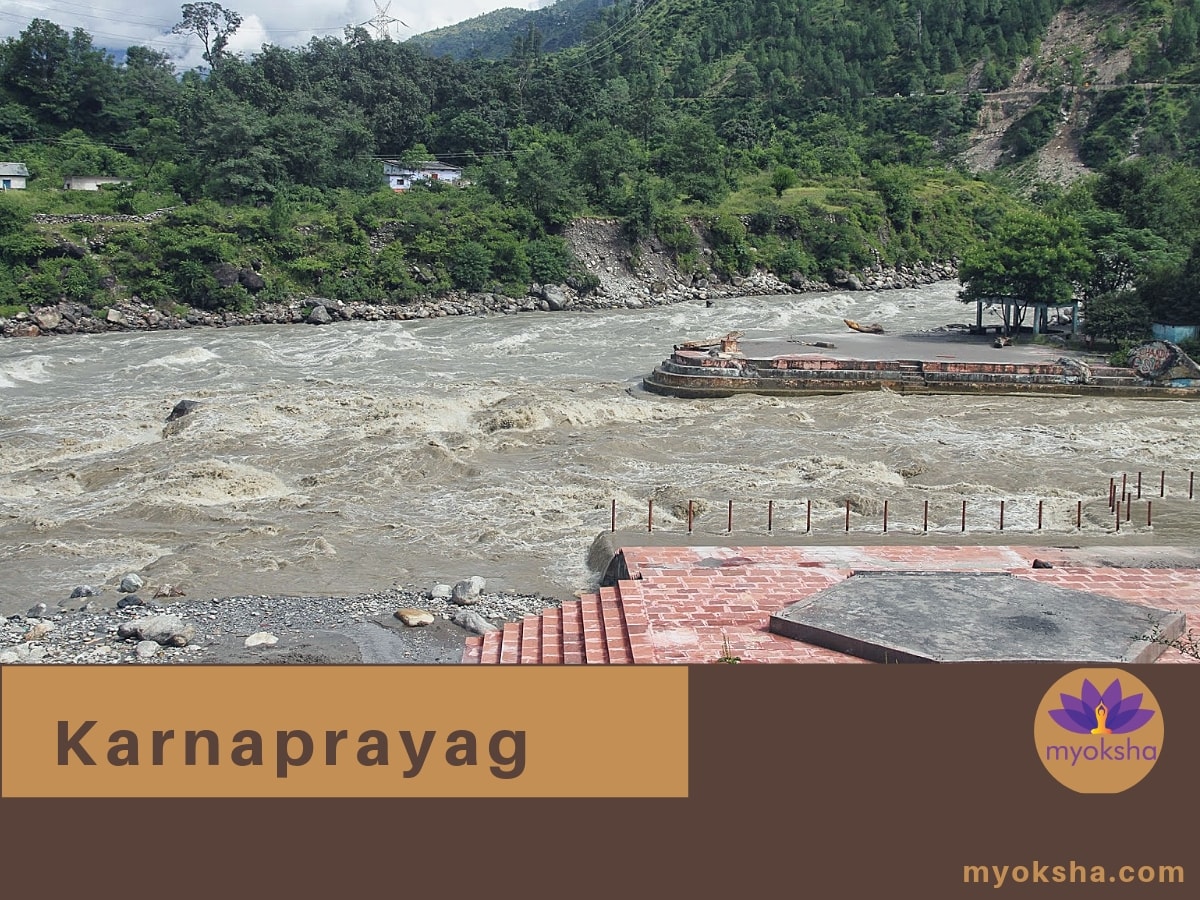 Karnaprayag is among the five confluences of river Alaknanda (Panch Prayag). It is present at the point where both rivers namely, Alaknanda with Pindar unify. The meeting point of the two rivers is in the Chamoli district of Uttarakhand. A string of peaks like Trisul, Drona Giri, Narad Ghunti, Mrigathuni and Maiktoli wrap around the place.

Devotees believe Karnaprayag to be the place where Karna of Mahabharata rigorously worshipped the Sun God. Moreover, it is a famous pilgrimage destination that falls in the holy pilgrimage of Char Dham Yatra.

Making donations after taking bath at the Holy confluence is considered meritorious.

There are a few mythological tales that relate to Karnaprayag like:

The first tale highlights the confluence as the place where Karna worshipped the Sun god. Hence, the Sun god granted him an impregnable armour.

However, the second story foretells that after the use of Anjalika Astra on Karna. Krishna found that Arjuna had wounded him, however, Karna was still alive. Hence, Krishna told Arjuna that Dharma Devta or the Goddess of Righteousness protected Karna for the charities he did in his lifetime.

So to break through the protective shield, Krishna put up the disguise of a brahmin and went to Karna. Further, he asked Karna for all his abilities as a warrior in charity. Hence, being how he was Karna respected the Brahmin’s wishes and donated his blood to him along with all his skills.

Hereafter, Karna requested Krishna to cremate him in a land that was still virgin. Hence, beliefs are that in honour of Karna’s wish Krishna cremated him at Karnaprayag. Also, we have a temple on that land dedicated to the great warrior, Karna.

Karnaprayag has a holy essence to it. The place has a mythological attachment to the epic occurrence of Mahabharata. Hence, we have a temple dedicated to Karna by the banks of Karnaprayag. Moreover, the place also flaunts a famous Uma temple, dedicated to Goddess Sati, the wife of Lord Shiva. Furthermore, Sati’s reincarnation as Goddess Parvati is quite popular.

Swami Vivekananda is believed to have meditated here along with Guru Turianand Ji and Akharanand Ji for eighteen days in a row. Moreover, Karnaprayag lies on the pathway of the major shrines of the Charm Dham Yatra namely, Badrinath and Kedarnath.

Apart from religious strings, Karnaprayag stands out for its lush green scenic beauty that captures every eye-crossing the Prayag. So, it affirms its positions as a major stop on the tour of the Char Dham Yatra destinations within Uttarakhand.

Stays near Karnaprayag that devotees can hail during the Char Dham Yatra in Uttarakhand are:

The Panch Prayag are a part of the Char Dham Yatra within Uttarakhand.

Which rivers collide and merge at Karnaprayag?

It is the place of merging of river Alaknanda and Pindar.

How much budget is required to visit the place?

The place can be visited easily in around a budget of 4k-5k.

What is the temperatures in this Prayag?

The temperatures in summer vary from 15°C-40°C, however, in winter temperature can fall down to 2°C.