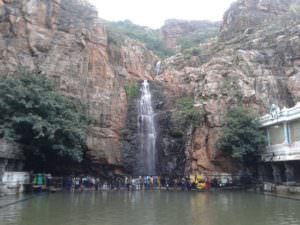 Kapila Theertham is located in Tirupati. Sri Kapileswara Linga is the self-created form of Lord Shiva which is also known as the Svayambhu form of Lord Shiva. There is also a sacred lake Sarovara that came into existence in front of Kapila Theertham temple. It came through the opening created by the lake Kapila maharishi arrived on the earth. From 1008 theerthams in Tirumala, Kapila Theertham Temple is the only holy theertham that is located at the foot of Tirumala hill. This theertham is very sacred and devotees visit this temple in a large number.

The timing for Anna Prasadam is from 5:00 AM to 3:30 PM and from 5:00 PM to 10:30 PM when free and unlimited food is offered to all the pilgrims. The Anna Prasadam center is next to the Sri Hygreevar Swamy Temple at Thiru Mada Street. The food here is served in Banana leaf with a variety of options. The cooking is done using Solar Electricity and the quality of the food is well maintained.

Besides these festivals, the other festivals that are celebrated with great enthusiasm are Vinayaka Utsavam, Annabhishekam and Kamakshi Devi Chandana Alankaram.

Poojas and Rituals at Kapila Theertham

Following are the Poojas and rituals that are performed on the Kapila Theertham Temple:

How to reach Tirupati: Road, Rail, and Air

Hotels in Tirupati: Where to stay

There are different Guest houses that are available where one can stay. There are several large choultries with free rooms for families to stay in reasonable comfort. Electricity and water are provided free of charge. Besides these, the other guest houses are Padmavathi Guest House, Sri Venkateswara Guest House and VarahaSwami Guest House.