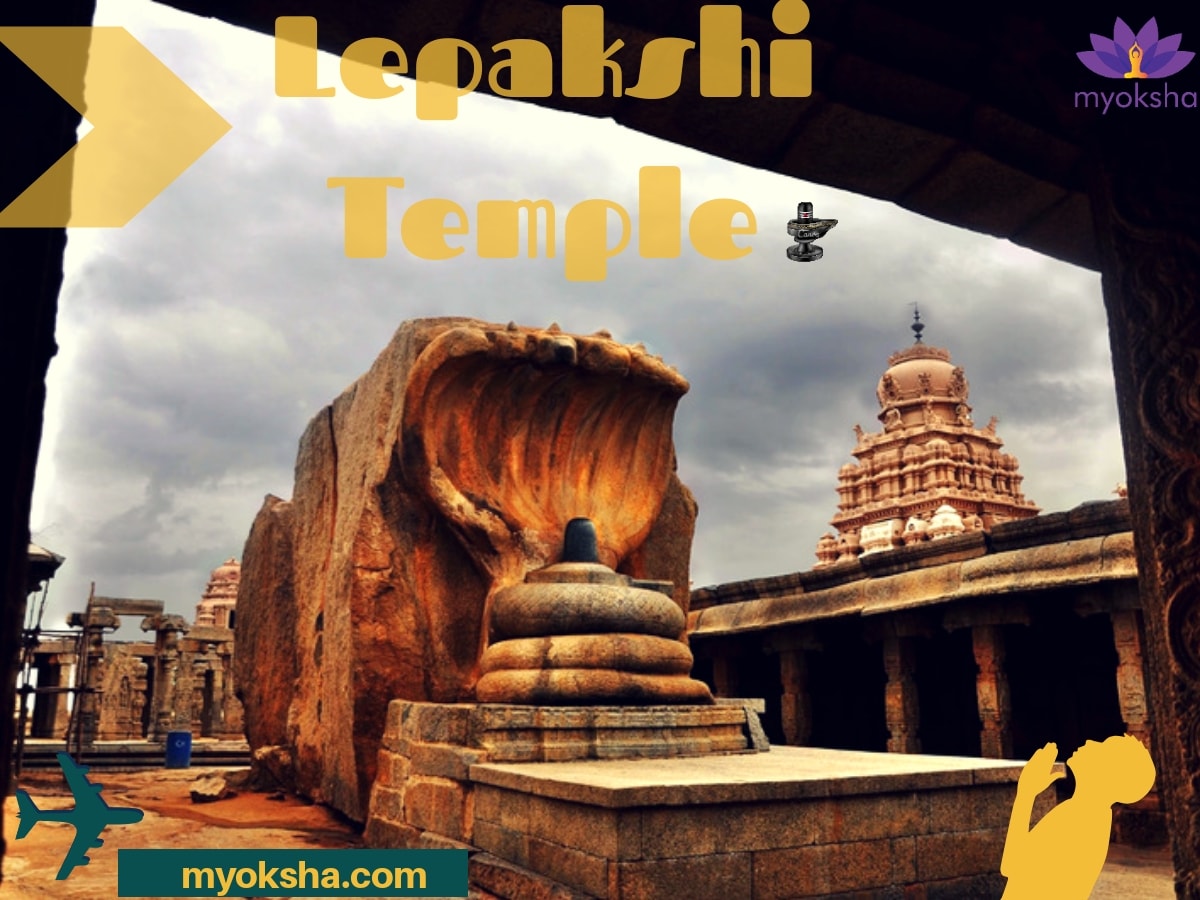 Lepakshi Temple is a dedication to the cult deity Veerabhadra. The temple is based in the small village of Lepakshi in the Anantapur District of Andhra Pradesh. The construction of the temple took place in the 16th century during the reign of Vijayanagara Kings.

Lepakshi Temple has three shrines dedicated to the Hindu Gods Shiva, Vishnu and Veerabhadra. There exist about 70 pillars at this fabulous 16th-century stone structure of Vijayanagar style architecture.

This temple houses the largest sculpture of the demon king Veerabhadra. Moreover, much of the temple stands on a low rocky hill called Kurmasailam. The word ‘Kurmasailam‘ translates to tortoise hill in the Telugu language.

One of the pillars n Lepakshi Temple is popular as the Aakaasa Sthambha (Hanging Column). This pillar does not rest on the ground fully. During the British era, a British engineer’s labour in trying to move it were in vain. However, doing so made the pillar dislodge from its original position.

Besides the Hanging pillar, the other thing that is worth seeing is the spectacular Nandi which is located almost a mile before the main temple. It is 27 ft in length and 15 ft in height which is reputedly India’s biggest monolithic Nandi.

Devotees can visit the temple for darshan in the following timings –

The temple opens all days of the week. However, timings may change during festivals, important rituals and eclipses.

Poojas and Rituals performed at the Lepakshi Temple

At first, the puja of the Shivalinga takes place. Henceforth Lord Veerabhadra is worshipped. In the morning, the lord appears in Bala rupa (youth). And turns to a hero in a moustache by the evening.

Devotees perform Abhishek to Lord and Mother and offer clothes. Offerings in form of the sweet pudding – Sarkarai Pongal Nivedhana is also made. As in Lord Vishnu temples, here too Sadari blessing with the lotus feet of the Lord is offered to devotees. Betel leaf is given as prasad in the temple.

The history of Lepakshi Temple dates back to 1530-40. The Virupanna and Viranna brothers did the construction of the temple. The two brothers were in the service of Vijayanagar Kings. At that time Vijayanagar was King Achutarya’s kingdom.

But according to the Puranic story, Lepakshi Temple was built by the sage Agastya. Moreover, Skanda Purana states that this temple is one of the important pilgrimage sites of Lord Shiva known as divyakshetras.

How to reach Lepakshi Temple – Road, Rail and Air

Hotels near Lepakshi Temple – Where to stay

Lepakshi temple does not have any guesthouse available. However, there are some good hotels nearby it –

There are several hotels around the temple that offer tasty and mouth-watering dishes. The South Indian food prepared here has an unbeatable taste. Tourists can get both vegetarian and non-vegetarian food near the temple. Other cuisines one can find here include North Indian and other modern varieties. The nearby restaurants that are worth visiting include Annapoorna and Ghuma Ghumalu Restaurant.

If you have any questions about Lepakshi Temple, please leave a comment below, and we will get back to you within one hour.