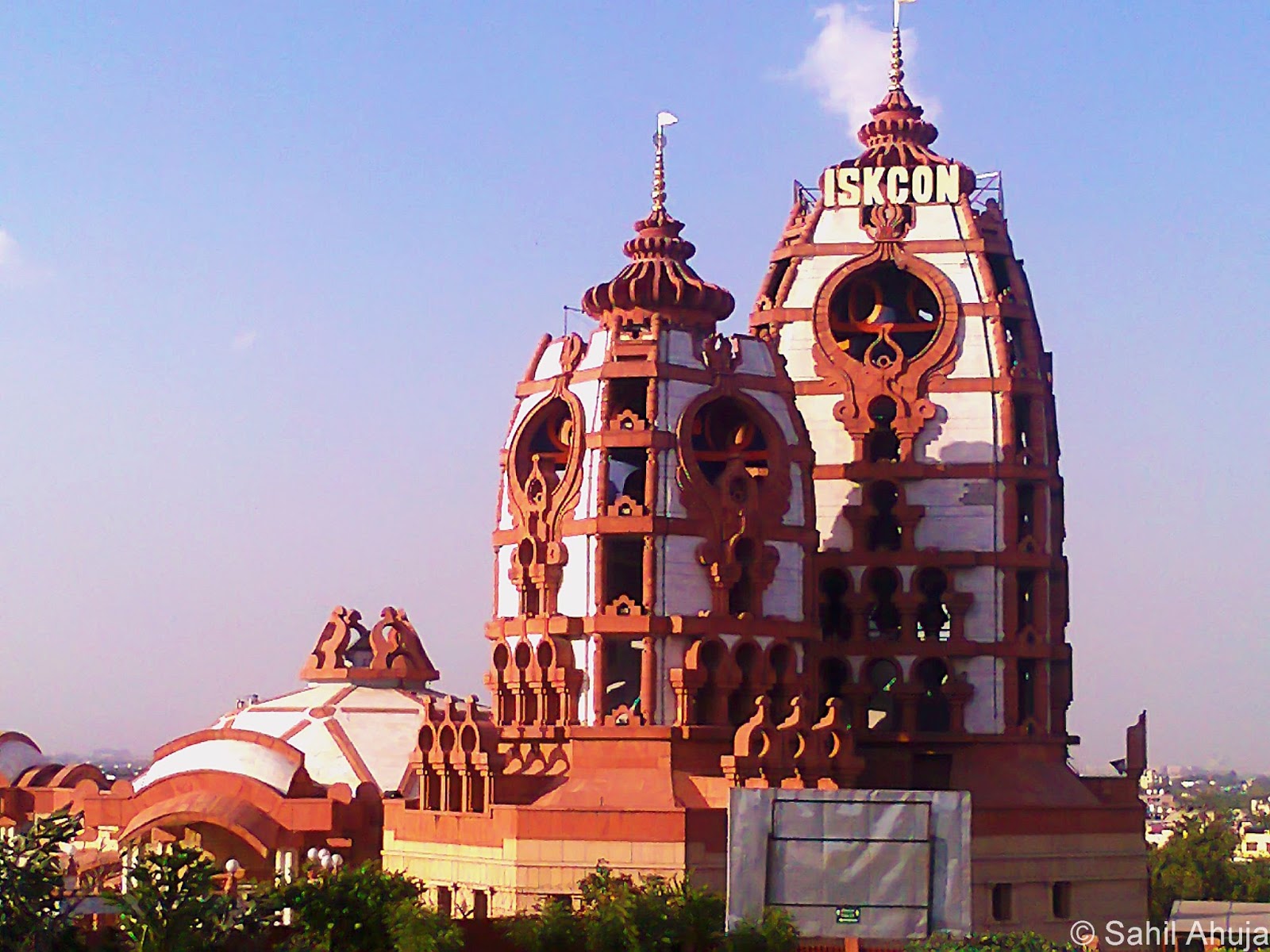 Iskcon Temple Delhi also known as ‘Sri Sri Radha Parthasarathy Temple’ or ‘Hare Krishna Temple’ built by The International Society for Krishna Consciousness – popularly known as ISKCON or ‘Hare Krishna Movement’ – belongs to the Gaudiya-Vaishnava sampradāya, one of the various traditions of the Hindu culture.

Philosophically, this tradition is based on the Sanskrit texts Bhagavad-gītā, and the Bhagavat Purana or Srimad Bhagavatam. These historic texts fall under the ‘bhakti yoga’ tradition, literally meaning ‘devotional discipline’. They teach that the ultimate goal for all living beings is to reawaken their love for God, particularly God Krishna – the “all-attractive one”, through devotion, prayer, and meditation. Iskcon Temple was established in India in the year 1998 in Delhi.

One of the 40 temples built by the Society, it is situated in Sant Nagar area in south Delhi. Iskcon Temple has three shrines dedicated to Radha-Krishna, Sita-Ram, and Guara-Nitai. It has an air-conditioned hall that can accommodate as many as 1,500 people at a time. During the months of Saawan (July–August) and Kartik (October–November), the temple is decorated with fresh flowers. The air is thick with spiritual discourses and chants, enhancing the divine atmosphere, thus propagating the devotion to God.

ISKCON Temple complex consists of the Temple, Museum of Vedic Culture, Center for Vedic Studies, Vedic Center for the Performing Arts, Asrama, and Krishna Jayanti Park. ISKCON welcomes anybody and everybody from devotees to those who want to learn the essence of the Vedas.

Significance of the Iskcon Temple Delhi

The Society believes in serving God through serving mankind. It organizes many programmes in this regard.

ISKCON members have also opened hospitals, schools, colleges, eco-villages, free food distribution projects, and other institutions as a practical application of the path of devotional yoga.

Special activities and projects such as dramas, exhibitions, workshops, community projects and cultural presentations — by volunteers — are shared with the community and the general public.

Festivals are a vital part of community life at ISKCON Delhi, involving large numbers of volunteers.

Iskcon Temple is open on all days of the week. The temple schedule is as follows

The main Iskcon Temple hall is closed between 1 pm and 4 pm.

The Society operates a Govinda’s cafeteria, serves pure vegetarian (Saatvik) meals which are first offered to God Krishna. It offers 18 varieties of preparations for lunch and dinner.

ISKCON operates a guest house in the temple complex with cozy and well-ventilated rooms on one-month prior booking.

Also, there are several lodgings in Sant Nagar around the temple area.

Sant Nagar is an area in south Delhi which is very well connected with the rest of the city.

By Air: ISKCON Sant Nagar is 20 km from the New Delhi international airport and can be reached using pre-paid taxis, metro train, and DTC Shuttle buses all of which are available right at the arrival terminal.

By Train: Metro –The Nehru Place metro station is the closest to the temple and is just a 5-minute walk. The alternate option would be ‘Kailash Colony’ Station

By Road: Several state government run buses and taxis operate round the city which transports to Sant Nagar area.

Delhi is a city with rich history housing several monuments and temples with great cultural and political significance. Below are some of the places which are nearby Sant Nagar.