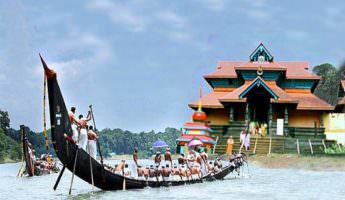 As per myth, the temple was originally built near Sabarimala. The famous Tamil classic, Divya Prabandha mentions this temple. This classic dates back to the 6th to the 9th century.

Planning to visit Sabarimala? Find out Sabarimala Opening Dates for 2019.

After leaving their capital city, Hastinapur for pilgrimage, the Pandavas arrived at the banks of River Pampa. These temples were built at that time. Every temple has an image of Lord Krishna.

As per legends, Arjuna built the temple as a penance of killing Karna. As it is against ethics to kill an unarmed warrior.

There is also another myth regarding the name. The place derives its name from the word arin villai. This word means a land near the river.

Aranmula is popular for its metal mirrors. The story of these mirrors begins from the Aranmula Parthasarathy Temple. As per myth, once the Travancore king decided to donate a crown to Lord Krishna. He was looking for a crown of rare metal. At this time, he got a rare combination of copper and lead.

Also, there is a myth regarding the boat race of Aranmula. When Arjuna was returning with Lord Krishna’s image after long penance, there was a huge flood. At this time, he crossed the river on a raft. A low caste Hindu gave him the raft to cross the river. The raft was of six bamboo pieces. This annual boat race commemorates the help of the low caste Hindu.

The Aranmula Parthasarathy Temple is important in the Hindu religious history as:

Devotees can get prasadam after the morning Pooja.

The dress code of the Aranmula Parthasarathy Temple is quite similar to the other temples of the state.

How to Reach Aranmula Parthasarathy Temple

Aranmula is easily reachable from all parts of the state as it is just 116 km from Trivandrum. Trivandrum is the capital city of Kerala.

Where to stay nearby

Besides the Aranmula Parthasarathy Temple, this temple village has some other shrines and groves.

Pulikkunnumala Mahadeva Temple: This temple is also worth a visit. It is just 4 km from Aranmula. As per myth, this was the worship place for the Pandavas. The Pandavas are the main characters in a great Indian epic. This great epic is Mahabharata. The temple worships Lord Shiva. Kshetra Samrakshana Samiti looks after the temple.