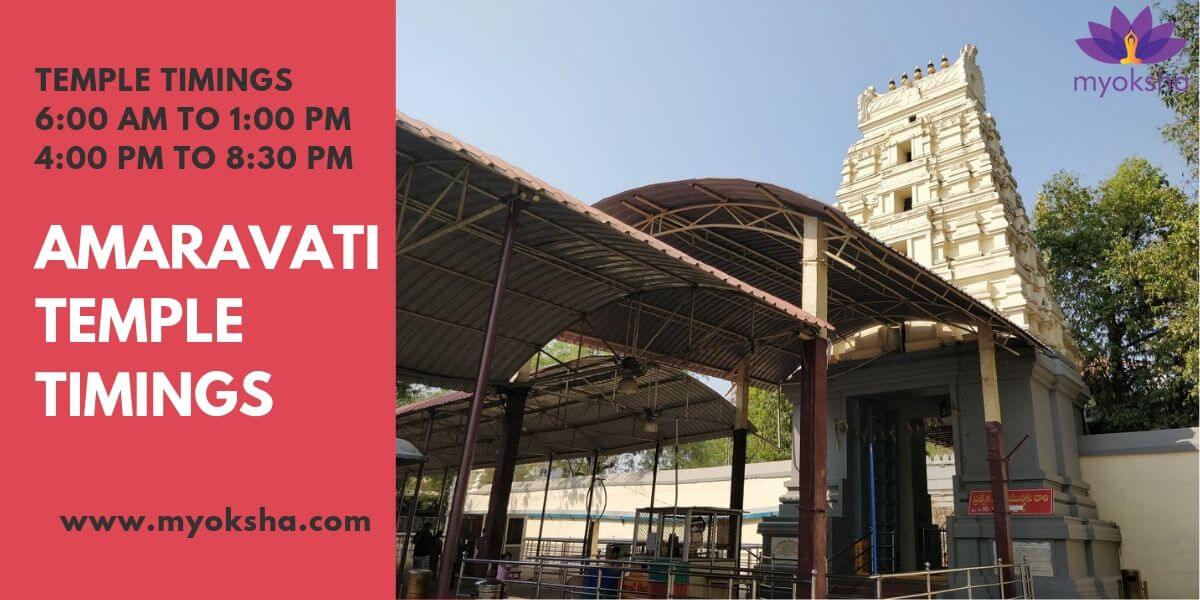 Amaravati Temple is in the Guntur district of Andhra Pradesh. The temple is in honor of Amaralingeswara, an incarnation of Lord Shiva. There is a huge Shiva Lingam that is worshiped here. Another deity of the Amaravati Temple is goddess Bala Chamundika, the consort of Amaralingeswara Swamy. In this guide you will find out about Amaravati temple timings, history, poojas list, significance and how to travel to Amaravati.

Here are the timings of Amaravati Temple:

What is the history of Amaravati Temple?

The most popular historical legend that revolves around Amravati temple is that the 15 feet Shiva Lingam here was nailed to stop its growth. There is a red mark at the top of the Lingam which is the blood stain that oozed out when the nail was hammered into it.

The Skanda Purana narrates a unique story of the Amaravati Temple. As per the Purana, at the end of Dwaparayuga, almost 5053 years ago, the Sounakadi saints asked the way to liberation to Maharishi Narada. Maharishi informed that Lord Krishna created River Krishna so that saints can bath in its water and attain salvation. Any devotee, who stays here for three days, bathes in the holy waters of the river and worships Lord Amareswara, shall attain liberty. Anyone who dies here shall be absorbed into Lord Shiva; hence, the importance of the place led to the construction of the temple.

Another legend states that when the demons defeated the gods at Varanasi, Lord Shiva appeared to defeat the demons. Devotees also believe that God Indra established the Shiva Lingum at this temple.

As per some, the temple was actually a Buddhist stupa and hence the base of the Amaravati Temple is still in Buddhist architectural form. The Mula Virat within the sanctum is in the form of a white marble lotus medallion, which is a feature of the Buddhist architecture.

Amaravati Temple exhibits the Dravidian style of architecture, built on a small hammock, known as Krouncha Shaila. There are four gopurams encircling the shrine along with a Vimana, all built in the Dravidian way. The walls of the temple are contain inscriptions, which are similar to that of the Kota chiefs of Amaravathi and Sri Krishnadevraya, monarch of the Vijayanagara Empire. The wife of Proli Nayudu, the then minister of the Kota king, Ketaraja, inscribed the inscription on the Mukhamantapa pillar .

The temple contains three concentric circles. While the first circle houses the temples of Mahishasura Mardini, Veerabhadraswamy, Omkareswara Swamy, Guru Dattareya, and Agasteswara Swamy, the second circle contains the temples of Vinayaka, Kalabhairava, Anjaneya, Nagendraswamy, Kumaraswamy along with the statue of Lord Krishna under a tree. The third circle is a bit above the second circle and comes with the temples of Kasi Viswanatha, Mallikarjuna, Pushpadanteswara Swamy and Kalahasthiswara. At the heart of these three circles is the deity of Amaralingeswara Swamy. Kalahasti temple has the remedy for Rahu Ketu Puja.

Besides engagement in the daily worship of the Lord, the temple trust of Amaravati Temple also participates in various charities for the overall development of the society.

What is the significance of Amaravati Temple?

Significance of Amaravati Temple is that it is in honour of  Lord Shiva, as the destroyer of the universe. It is one of the five Pancharamas, or holy sites, the other four being, Kumararama, Ksheerarama and Bheemarama and Draksharama. Worshiping at this temple is believed to resolve family issues.

Amaravati is an important site of Hindu and Buddhist religion. It was a centre of Buddhist art and still bears many relics of the same.

River Krishna is pious and devotees often dip in its holy waters to cleanse their souls.

The Amaravati Temple is also unique in its style of worship. Unlike other Shiva temples, Abhishekam (the custom of pouring libations) is performed from upstairs as the 15 feet Shiva Lingam is too high to be reached from the ground floor.

Besides its religious significance, the temple is also historically important. The inscriptions which are engraved on the walls of the shrine describe the ruling kings of the region.

What is the Dress Code for Amaravati Temple?

The dress code for Amaravati Temple is:

Which festivals are celebrated at Amaravati Temple?

The Amaravati Temple is crowded with devotees during different festivals and it is one of the best times to experience the true South Indian rituals.

Besides the festivities, there are regular rituals at the Amaravati Temple.

There is no official website for Amaravati Temple.  You can find all the information you need here.

How to reach Amaravati Temple?

Amaravati is an important tourist destination of Andhra Pradesh and hence easily accessible.

Where to stay near Amaravati?

Tourists can avail decent hotels at Amaravathi. For luxurious accommodation, they must arrange for a stay at Guntur. Amaravati Temple trust also has special guest houses. The government has also made special arrangements for thousands of pilgrims that visit the temple and they can find accommodation at PWD travellers’ bungalow.

Where to eat in Amaravati?

There are several vegetarian hotels available near Amaravati Temple. The food comes with the unique South Indian flavour. The food stalls are clean and the food is tasty.

Some of the temples near Amaravati Temple are:

Hence, a trip to Amaravati Temple is not only a pilgrimage but also an excursion to the ancient art and architecture of India. The site of Amaravathi depicts a wonderful fusion of Hinduism and Buddhism, amazing the tourists.