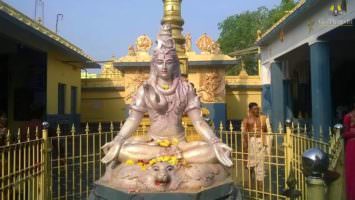 Ksheera Ramalingeswara Swamy temple in the West Godavari district of Andhra, Palakollu is a grand temple of Lord Shiva that is one of the Pancharama temples. The presiding deity here is Lord Shiva whose form was established by Lord Vishnu. Locally this temple is also famous as Pedda Gopuram.

What is the history of Palakollu Ksheera Ramalingeswara Swamy Temple?

During the 14th century, Sri Alladu Reddy built the Gopuram. During the 17th century, there was construction of Kalyana mantapam (choultry) and Ashtha Bhuja Lakshmi Narayanaswamy alaya.

What is the significance of Palakollu Ksheera Ramalingeswara Swamy Temple?

Significance of Ramalingeswara Swamy is that the Shivalingam at the temple is the tallest one and has a unique milky white color. The shiva lingam which is popular as moola virat is visible from all four sides of the sanctum sanctorum or garbha griha.

In addition one can also view several other gods like the Sun God, Devi Parvati and Lakshmi, Veera Bhadra, Kanaka Durga, Nataraja, Shankara, Radha Krishna from all four sides.

Locally there is a saying that staying for a day at Ksheerama is equal to staying at Varanasi.

The temple has 72 pillars made of black stones.

Here are the timings of Ksheera Ramalingeswara Swamy Temple:

Here’s how to reach Palakollu Temple:

Where to stay near Palakollu?

Some of the places where one can stay near Palakollu are:

What are some temples near Palakollu?

Some of the temples near palakollu are: