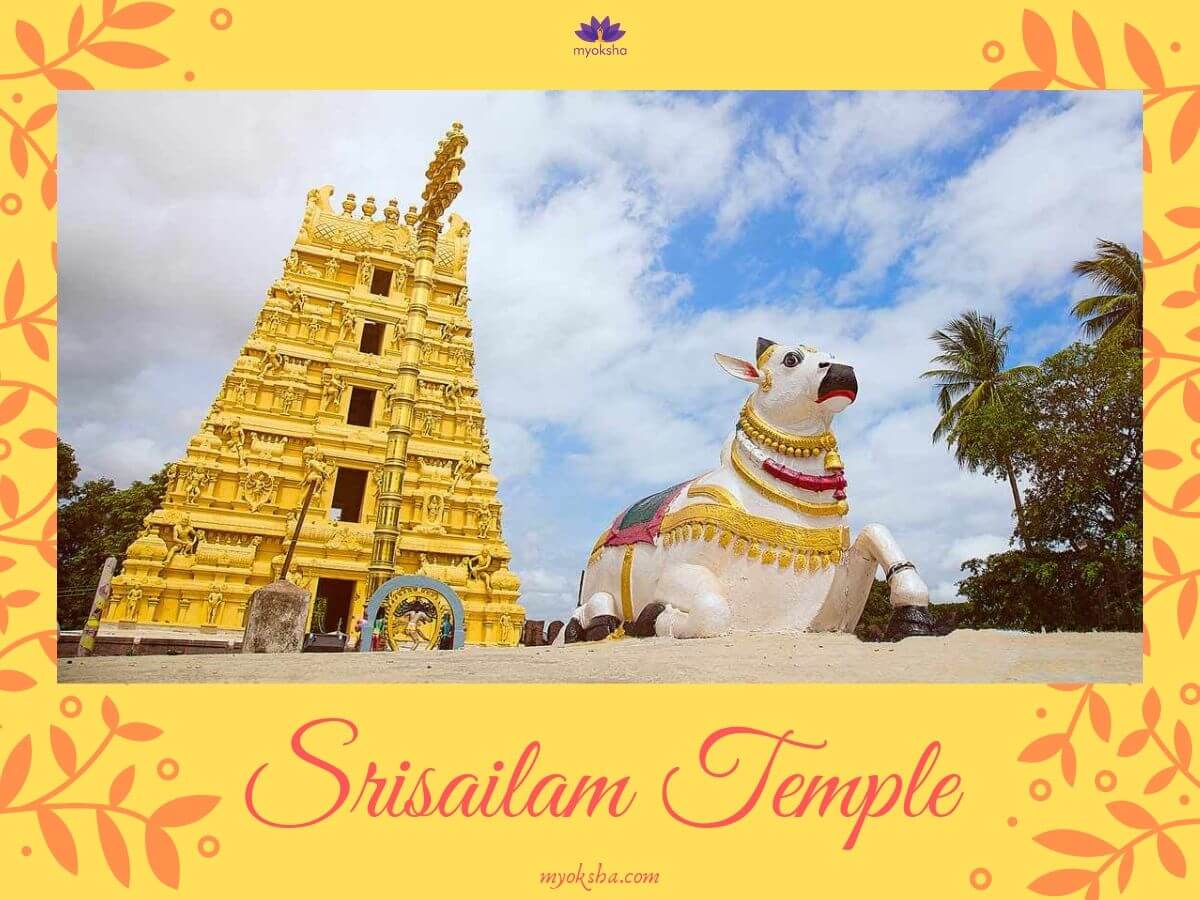 Srisailam Temple also known as Bhramaramba Mallikarjuna Temple is situated in the Kurnool district of Andhra Pradesh. The temple is on the top of the Nallamala hills, on the banks of River Krishna. The Lingam of the presiding deity Lord Mallikarjuna Swamy is one of the 12 Jyotirlingas dedicated to Lord Shiva.

Planning to visit the Srisailam Temple? Have a look at our Srisailam Tour Package.

The famous hill is also popular as Siridhan, Srigiri, Sirigiri, Sriparvatha as well as Srinagam. It is also one of the most important Shaivite pilgrimage sites in India. There are two separate temple complexes present inside – one is in dedication to Lord Mallikarjuna while the other one is for Goddess Bhramarambha.

What are the timings of Srisailam Temple?

The temple opens at 4:30 AM and closes at 10:00 PM. The temple also performs various rituals during this time. The devotees can be a part of these rituals, such as the morning, afternoon, and evening poojas.

The aarti timings are:

What are the poojas and sevas at Srisailam Temple?

The poojas and sevas performed at the Srisailam Temple are:

What is the significance of Srisailam Temple?

The significance of Srisailam Temple is that Mallikarjuna Linga is one of the twelve Jyotirlingas of Lord Shiva. It is supposed to have appeared in a fiery column of light. Moreover, the Linga is swayambhu. Devotees also believe that the neck of Sati fell here when her corpse was cut.

Anyone, irrespective of caste, creed or religion can perform Abhishekam and Archana to the Mallikarjuna Linga. The unique feature is that you can touch the Linga and perform the Puja yourself.

Beliefs also say that Lord Rama himself installed the Sahasralinga in the Srisailam Temple. The Linga is divided into 25 facets which in turn represent 40 Lingas each. This leads to a total of 1000 small Lingas carved on a single Linga.

The Pandavas placed the Panchapandava Lingas in the temple courtyard. The five Lingas have their names after the different forms of Siva – Sadyojatha, Vamadeva, Aghora, Tatpurush, and Eesana. Moreover, stories from the Mahabharata are there on the walls of the temple. The Srisailam temple also has mentioned as a holy hill in the Mahabharata.

What is the history of Srisailam Temple?

As per the history of Srisailam Temple, mention of Srisailam hills can be traced to the Nasik inscription of the Satavahana King Vasisthiputra Pulumavi in the 1st century AD. The Ikshavakus Kingdom ruled Srisailam from AD200 – 300. The inscriptions dating around AD 375-612 state that the Vishnukundis were the devotees of Sri Parvathsawamy.

According to the Shiva Purana, when Lord Ganesha got married before Lord Karthikeyan, Lord Karthikeyan got angry and left for the Kraunch Mountain. Lord Shiva and Goddess Parvati tried to console him but were unable to stop him from leaving. Dejected, Lord Shiva took the form of Jyotirlinga and settled on the mountain-top.

There is another legend associated with the Srisailam Temple. Chandravathi, daughter of Chandragupta Patana ran away from her father who made amorous advances towards her. She crossed the River Krishna and went up to the hilltop where she lived with her servants. She observed that one of her cows would stand over a rock formation and shed milk over it daily. The Princess dreamt that the rock was a self-manifested Linga of Lord Shiva.

Hence, she dug the ground and a glowing Linga emerged out of it. She worshipped the Linga daily by adorning it with Jasmine (Mallika) flowers. Lord Shiva was very pleased, so he granted her Mukti and salvation by sending her to Kailash.

What are the festivals celebrated at Srisailam Temple?

Some of the festivals celebrated at Srisailam Temple are:

How to reach Srisailam Temple?

Here’s how to reach Srisailam Temple:

Devasthanam or the Temple management launched the Kuteera Nirmana Pathakam, a donation scheme under which they have built several suites, cottages, rooms as well as dormitories for the pilgrims. Please bring your Identity card to confirm the booking. Also, one cannot cancel the booking.

There are up to 70 private hotels/choultries in the area where one can avail accommodation and food.

Some of the places one can visit near Srisailam Temple are:

Is the Srisailam Temple open throughout the year?

Yes, the Srisailam Temple is open all 365 days of the year.

The entry to the Srisailam Temple is free of cost.

The summers in Kurnool starts from April and continue until June. The summers here can be very hot and dry. Temperatures during the daytime often go up to 45 º C.

In Kurnool, winters start in October and continue until March. The temperatures during this time range from around 17 º C to 28 º C. The weather during this time is not too cold and pleasant.

If you have any questions about The Srisailam Temple, please leave a comment below, and we will get back to you within one hour.