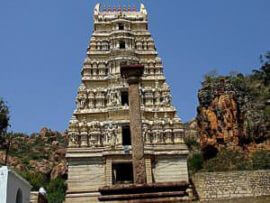 Yaganti Temple also known as Sri Uma Maheswara Temple or Yagantiswamy Temple is located in Yaganti which is in Kurnool of Andhra Pradesh. This temple is devoted to Lord Shiva and is supposed to have been built in the 15th century by kings Harihara and Bukka Raya of the Sangama dynasty of the Vijayanagara Empire.

Yaganti Temple is extremely beautiful and is in the middle of the Yerramala Hills, surrounded by scenic beauty. Also, there are numerous caves in the hills around the temple where quite a lot of saints reside including the great Telugu saint and astrologer ‘Potuluti Veera Brahmam Garu.’

The temple dates back to 5th and 6th centuries with donations from the Pallavas, Chalukyas, Cholas and Vijayanagara rulers. Apart from this, the temple also received valuable contributions from Vijayanagara Kings Harihara and Bukka Rayalu who completed the construction of quite a lot of structures in and around the temple.

Yaganti Temple has idols of Shiva and Parvathi engraved out of a single stone. This temple is almost certainly the only place where Lord Shiva is adorned in the form of an idol and not in the form of a Shiva Linga. It is a popular belief that Agastya performed the sacrament for Lord Shiva and appealed him Lord Shiva to make an appearance in Ardhanareeswara form. Another very bizarre yet miraculous characteristic of this temple is that the idol of Nandi here keeps increasing in size.

Lord Agastyar was a preacher, a Vedic saint, the earliest Siddhar & one of the Saptarishis, the seven sages who were extruded at many places in the Vedas. According to the mythology associated with the temple, Lord Agastyar desired to construct a temple for Lord Venkateswara, i.e. Lord Vishnu at Yaganti.

Accordingly, a number of rituals were performed to establish the idol of Lord Vishnu at the explicit place selected at Yaganti but to his surprise, he found that the nail of the foot thumb finger was broken. Lord Agastya was bothered to discover this and made a sacrament to Lord Shiva to be acquainted with the reason behind the incident. Lord Shiva responded positively to his prayer and appeared before him and explained that the place bear a resemblance to Kailash and it is appropriate tobe the domicile of Lord Shiva.

Yaganti Temple is has been constructed as per the Vaishnava traditions and it demonstrates the artistic dexterity of the ancient Vishwakarma Sthapathis.

The deities of Yaganti Temple are Lord Shiva and Goddess Parvati carved on a single stone. There is also a cave in the name of sage Agastya who performed the sacrament towards Lord Shiva. The idol of Lord Vishnu which was apparently believed to be distorted was also found in one of the caves of the temple known as Venkateswara Cave.

The Nandi also termed as Lord Nandeeswara, the ascend of Lord Shiva, present in the Yaganti temple is considered to be budding in size over the decades. As per the researchers, the rock out of which the idol of Nandi is made has a special characteristic which leads the rock to grow. Furthermore, it was also discovered that the idol of Nandi increases to about 10mm per eight years i.e., 1 inch per 20 years. The Archaeological Survey of India has conirmed that the growing of the size of the idol is due to Geological phenomena as per science.

A very significant and remarkable feature of this temple is that the Pushkarini which is the temple tank consists of sacred holy water flowing from the tank. But, the water is believed to flow from the bottom of the hill.

A very bizarre fact about the place is that crows are forbidden to fly in Yaganti. This is because when sage Agastya was meditating here, Kakusara, the king of crows distracted him from his deliberation and in rage sage Agastya spelled his curse on the crows to prevent them from his entering his premises. Likewise, Shani, the vehicle of crows also could not go through.

It is also a belief that people performed Pradakshinas, rounds around the idol of Nandi years ago. One of the pillars of the temple has been removed due to the increasing size of the idol. As per the Potuluri Veera Brahman, the Basavanna which is the idol of Nandi will come alive and bellow when Kaliyuga ends.

Yaganti Temple caves are also remarkable about the place. The following are the temple caves at Yaganti:

Yaganti Uma Maheswara Temple, Nandi: Also dissimilar to other Shiva temples, the idol of Nandi is not placed right opposite to Lord Shiva, rather it is located to the side of main Mantap. Sri Potuluri Veera Brahmendra Swamy declared in his prophecy that the idol of Nandi would come alive at the end of the Kaliyuga and would shout piercingly.

Yaganti Uma Maheswara Temple Akasha Deepam: The temple priest used to lit lamp using 4 litres of oil and 2-meter thick wick on an everyday basis. This was done in the evening on a ledge behind Veerabhadra Swamy Temple. The lamp burns from 6:00 am to 6:00 pm in an open air on the top of the hill.

What are the timings of Yaganti Temple?

Here’re are the timings of Yaganti Temple:

The customary Poojas and rituals are performed within this time slot on an everyday basis.

The main festival celebrated at the Yaganti Temple is the Maha Shivratri Which is celebrated in the month of February/March. This festival is celebrated every year and a mammoth of visitors and pilgrims come from across the country and abroad to be a part of this ceremonial festival.

How to reach Yaganti Temple

There are quite a lot of hotels available in and around the Yaganti Temple. Apart from the hotels, Lodges are also available at reasonable costs with all the necessary facilities and every year pilgrims from across the world visit Yaganti on an everyday basis.

There are a number of important temples located near by the Uma Maheswara/ Yaganti Temple and visitors from around the country visit these temples as well.