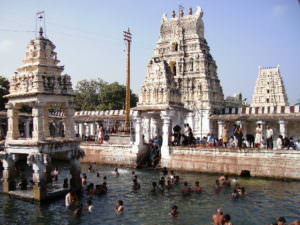 Mahanandi Temple also known as Mahanandiswara Temple located in the east of Nallamala Hills near Nandyal in Kurnool district of Andhra Pradesh. The Mahanandiswary Swamy Temple is positioned right at the foot of the hills of Srisailam forest.

Mahanandi Temple is also deemed as one of the ‘Nava Nandudlu Temples’ which means the ‘nine shrines’ dedicated to Lord Shiva.

Mahanandi Temple is also a center of attraction for visitors and pilgrims all over the country and abroad. This is because Mahanandi is a place of scenic beauty surrounded by thick forest and watered by persistent mineral springs from Pushkaranis. The temple is also famous for the presence of ‘Kalyani’ which is the temple tank and the tank is preserved in such a manner that the depth of water does not exceed beyond five feet.

According to Mahanandi Temple history ‘Sthalapurana’, the 7th-century temple is devoted to Lord Shiva. Mahanandiswara is one of the ancient temples of India and it dates back over 1,500 years and the inscriptions of the 10th-century tablets portray the fact that this temple has been restored and rebuilt quite a lot of times. The initial structure of the temple was erected by the Chalukyas in the 7th century and, later on, numerous additions were made to the temple in the 10th and 15th centuries.  According to the legend of the temple, the kings of the area who were addressed as Nandas ruled in the 10th century AD and constructed a mammoth of temples and adored their ancestral deity, Nandi.

One of the most momentous features of the Mahananadi temple is the purified holy water of Pushkarani which flows throughout the year. The water is believed to be so gemstone clear that even a particle dropped in the water looks visible. A tower named Gopuram which is placed over the central sanctrum was constructed in the ‘Badami Chalukyan Style’ of architecture and the rest of the temples were built in the ‘Vijayanagara Style.’

There are also several myths associated with this temple. As per the myth, Rasa Siddha is believed to have built a dome over the sanctum which is known as ‘Vimana’ and he also made the workers group sand mounds which he later altered to his wealth. A copper plate by Krishna Devaraya confirms that Mahanandi belongs to one of the most blessed places where Simha, the king’s brother donated precious gifts.

As per the legend, the milk which was used for Abhishekam which means ablution was used to be conveyed on a daily basis from a distance to the temple. A considerable amount of milk was brought from Gopavaram diary and the milk of a black coloured cow was sent to the king on an everyday basis, exclusively. The cow was approved to scuff in the forest but a couple of days later it was discovered that the cow had the propensity to provide less milk after the cow arrived from the forest. Few days later, a cowherd followed the cow and to his surprise, he found out that the cow scuffed around an embankment and allowed her milk to run freely on it.  From this edge emerged Lord Krishna and the cow then returned. The king came to know about the miraculous occurrence and decided to follow the cow the day later to seize a peek of Lord Krishna. As soon as the king proceeded and caught a glimpse of Lord Krishna, the cow became panicky and mistakenly stepped on the mound in fear. With this accident, the child disappeared but the impression of the cleft remained, with this the king realized his mistake and prayed for forgiveness. The Lord then proclaimed that the embankment would dry up and would develop into a ‘Swayambhu Linga’ at Mahanandi, even today the signs of the cow’s cleft are visible on the top of the Linga.

The Mahanandi temple is famous for its pools and attracts visitors every year. The architecture of the temple, as well as the pools, reflects the dexterity of the ‘Vishwakarma Brahmins.’

Apart from this, the main temple is enclosed by three pools, one big pool inside the temple itself and two small pools at the entrance. The holy tank is 60 square feet with an outdoor exhibition area known as ‘Mandapa’ in the center. The bay and exit of the tank are organized in such a way that the depth of water does not exceed facilitating the pilgrims to dip in the holy pools. The water source is also unique as it has continuous flow regardless of the change of seasons and the water source initiates at the ‘Garbhagruha’ which is placed below the Swayambhu Linga. The devotees are also able to touch the water near the Shiva Linga.

The most significant aspect of the temple is the fact that it has been reckoned as one of the nine shrines devoted to Lord Shiva. The Nava Nandulu temples are:

The supervising deity here is Lord Shiva who is worshiped by the name of Mahanandiswara Swamy which is in the form of a sanctified Shivalingam. The famous water source is also believed to have been evolved from beneath the self – manifested Shivalingam which is present in the sanctum sanctorum. The incredible trait of the temple is that the sanctified water gushing out of the sanctum sanctum assists in irrigating 2000 acres of fertile land around the village. The village is enclosed by rice fields, vegetables, fruits, flowers and other vegetation.

Apart from this, the Mahanandiswara Swamy Temple facing the west is enclosed by a high wall with the temple tower called Gopuram towards the north and south, of the late Vijayanagar era. The presence of Mukhamandapa, the main entrance hall with two subordinate shrines in the north and south. The Vimana which is the dome over sanctum is arched and pyramid shaped with a Shikara, a tower at the top in the Nagari style.

The fresh Koneru which means the water pools also called Pushkarani is a key factor of magnetism for all the visitors. The water is considered to come from five springs which are named ‘Srisailadhara,’ ‘Narasimhadhara,’ ‘Daivodhinidhara,’ ‘Nanditirtha’ and ‘Kailasatirtha’ respectively.

An enormous Nandi sits in front of the shrine providing the temple its name, the Mahanandi Tirtha. Close to the sanctum is a shrine devoted to the Goddess Kameshwari Devi, the companion of Mahanadeeshwara. The Srichkara in front of the deity is said to have been established by Adisankaracharya and the well-liked belief is that when one contemplate upon the Lord, one would receive an appearance which is applicable to the individual’s status ahead of the mother. The Mukhamantapa which is the entrance hall of the Goddess is a topical construction and the shrine of Kameswari Devi was recreated in 1939. In the rear of the main shrine, three small shrines containing a Shivalinga are present.

On the foundation of Mahanandiswara Temple, one can see an arched marble shrine of ‘Lord Kodanda Rama,’ the seventh incarnation of Lord Vishnu that was supplemented with the compound in 1953. Images of Sri Rama, Sita and Lashkmana are strikingly carved and the devotees find it complicated to progress away from them.

The sociable water of the ‘Rudrakundam’ irrigates 2000 acres of fertile land enclosing the village and the areas enfolding Mahanandiswara Temple are tranquil in nature with fruit, rice fields, flower gardens, vegetables and groves.

The festival of Maha Sivrathri is one of the most popular events where numerous devotees gather to pay homage and worship Lord Shiva. The festival is celebrated for seven long days initiating from ‘Maha Bhula Chaturdasi’ which is the 14th day after full moon in February- March. Around 20,000 devotees from different parts of the country, specifically from Andhra Pradesh, Mysore and Maharashtra visit the temple on an everyday basis. Pilgrims here have the propensity to worship ‘Mallikarjunaswamy’ and then a definite order to visit the other Nandi temples are followed.

Apart  from the Maha Sivarathri, some other remarkable festivals celebrated are:

How to reach: Road, Rail, Air

The other route to the temple is the Bangalore-Nandyal route: Bangalore to Gotty to Yaganti to Nandyal to Mahanandiswara Temple.

Mahanandi village and the areas nearby Mahanandi Temple consist of quite a good number of hotels and restaurants with a variety of  delicacies.

There are a number of important temples located near by the Mahanandi Temple and visitors from around the country visit these temples as well.