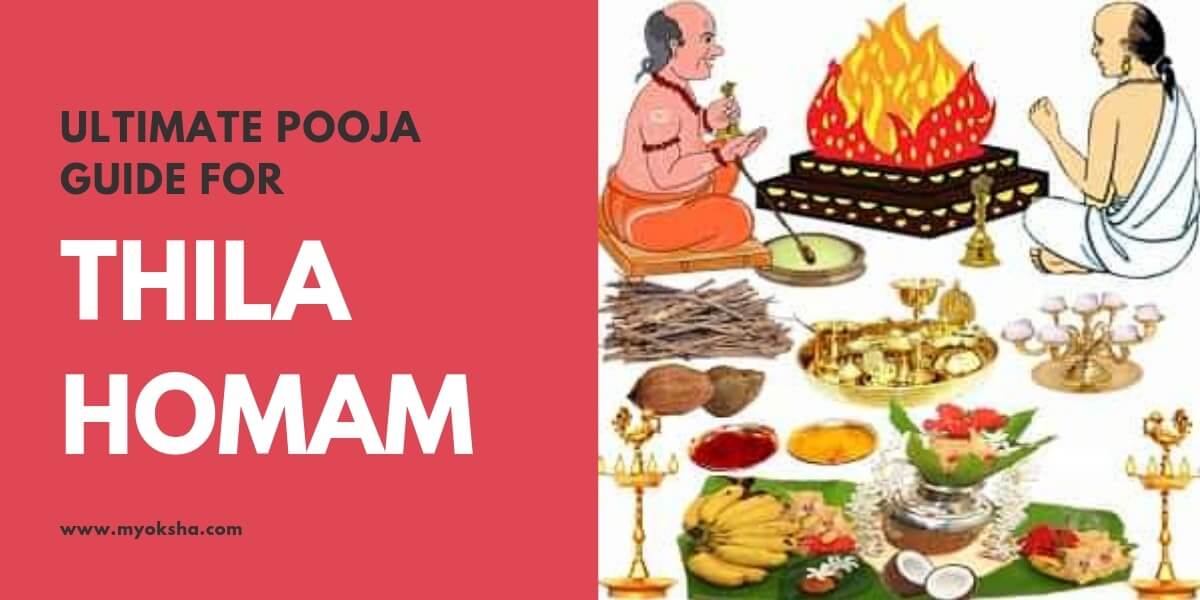 Thila Homam is a powerful Vedic ritual performed for the peace of souls of the ancestors and family members who died unnaturally. It is also a remedy for someone who is suffering from Pitru Dosha in his/her horoscope. Rameshwaram is the main place for performing Thila Homam.

We organize the pooja for you. Contact us now.

These unusual deaths may be because of:

In all the above cases, the dead soul waits desperately to become free from the evil powers of hell.

Devotees also believe that these souls are haunting or roaming in space and thus the Shastras advice the Thila Homam as a remedy to give the soul peace and to relieve it from negative forces. The Homam helps the soul find its way to rebirth or sends such a soul back to the lotus feet of God.

Who should perform Thila Homam?

Here’s the list of people who should perform Thila Homam:

Here is the list of benefits of Thila Homam:

When should I perform Thila Homam?

The Homam can take place any day if you are performing in Rameshwaram.

The most auspicious time is in Mahalaya Amavasya which is an annual ritual that is celebrated 15 days before Navaratri. It is known as the Pitru Paksha in most of India.

What is the procedure for Thila Homam?

Here’s how to perform Thila Homam:

How long does it take to perform Thila Homam?

It takes around 2 hours to perform Thila Homam.

What dress should I wear while performing Thila Homam?

Men should wear dhoti. Women should wear a saree or salwar. The dress that you wear while performing Thila Homam should be let off in the river after the Homam.

What are the materials required for performing Thila Homam?

The major ingredients of the Thila Homam are sesame seeds or ‘Til’ or ‘Ellu’, Homam or Havan samagri and all the holy materials that one needs to offer to the Agni Dev or the Holy fire while chanting mantras.

Where to perform Thila Homam?

Thila Homam needs to be performed at Rameshwaram which is the most powerful place for the Homam. If you are planning on performing the ritual in Rameshwaram then you should let us know at least a week in advance so that we can make the arrangements.

After the Homam, the ashes of the dead are mixed in holy seawater as it is believed that the dead soul will rest in peace and get salvation only at this spot.

The ritual takes place once in a lifetime, unlike other death ceremonies that take place annually or monthly. The new moon rituals can be performed regularly like any other auspicious Homa or Pooja but not the Thila Homam.

Rameshwaram is one of the 12 Jyotirlingas in India out of which 5 jyotirlingas are in Maharashtra.

What is the cost of Thila Homam?

Major costs of the Thila Homam are that of the ingredients and Dakshana for the priests.

If the homam takes place at the Rameshwaram temple, then below are the detailed costs.

Cost primarily depends on the count of chants performed during the homam. The cost of Brahmins is more due to the additional procedures required.

In addition to Thila Homam, below are the optional rituals that are performed and their costs.