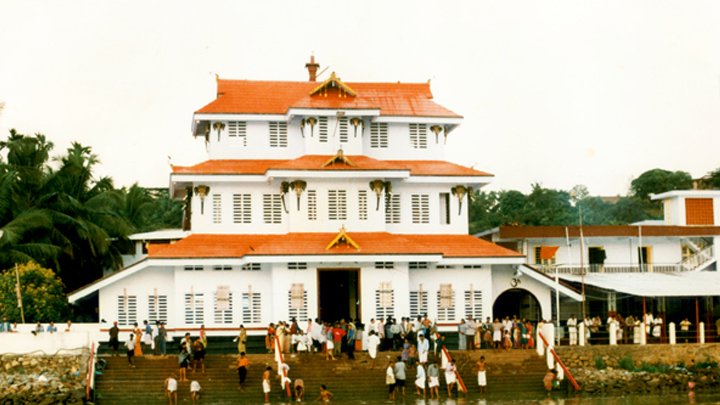 Sree Parassinikadavu Muthappan Temple is also known as Sri Muthappan temple which is one of the famous Hindu temples. It is situated on the banks of the Valapattanam river about 10 km away from Taliparamba town in Kannur District of Kerala State. The main deity of worship in the temple is Sree Muthappan that is an indication of 2 mythical characters named Thiruvappana and Vellattam.

The ritual performers of Muthappan Theyyam belong to the tribal community of Kerala. It is unique because in Kerala both the upper-caste Brahmins, and the lower-caste tribals have a significant contribution to the major forms of worship. The devotees can interact with God as they pour out their grievances in a chat with the tastefully decorated Muthappan Theyyam.

It is associated with the harvesting season of the region. The last Thiruvappana of the temple year is on 30 Kanni every year.

Thiruvappana is not performed on the following days:

By Air: Karipur International Airport at Kozhikode is the nearest airport. It is about 93 km from Kannur town. Mangalore Airport is about 120 km away.

By Train: Kannur Railway Station is an important railhead in Konkan Railway. It is the nearest railway station about 16 km from the temple.

Sri Rajarajeswara Temple: Rajarajeswara Temple is situated 20 km from Kannur of Kerala state, south India. It is near Taliparamba town, famous for its spices trade. The temple is believed to have got the name from Thiru Shambara or the holy shambara in reverence to Maharishi Shambara. The Shiva Lingam here is believed to be several thousands of years old. The Rajarajeswara temple in Thaliparamba in Kannur district is one of the famous Shiva Temples in Kerala in general and in North Malabar in particular.

Trichambaram Sree Krishna Temple: Trichambaram Krishna Temple is an 11th-century shrine situated at Trichambaram, just 2 km south of Taliparamba in Kannur District. It is 20 km from Kannur on National Highway 17. The temple dedicated to Lord Krishna is one of the best known Krishna temples in Kerala. The temple is of great archaeological importance. The sanctum sanctorum is double storied and has a pyramid-shaped copper roof with a golden stupa (pinnacle) at the top. The sanctum has beautiful carvings and murals which date back to the 15th and 16th centuries.