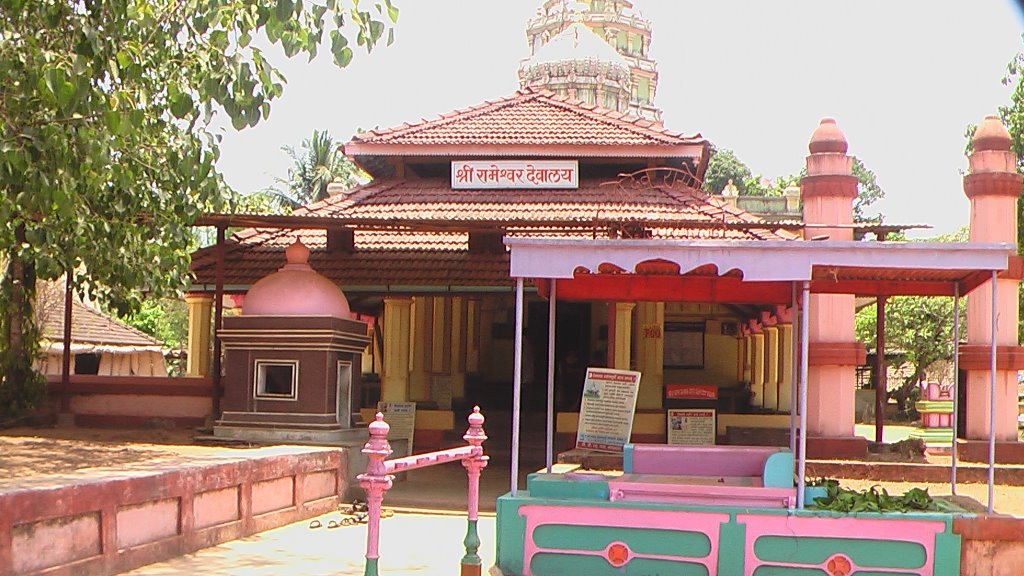 Rameshwar Mandir is a temple located in Chaul, Maharashtra. It is a very ancient temple of Lord Shiva. The Chaul region is known for its temples. A black sand beach, Revdanda lies about halfway between Nagaon and Kashid. Half of the small town lies in an old Portuguese fort. The village is famous for aromatic flowers known as the ‘Bakuli’. Rice is a major source of livelihood for the local inhabitants, apart from the trees and fishes. There are 365 temples in Chaul, equal to the number of days in a year. Chaul is about 15 Kms from Alibag, and the drive takes us through the picturesque villages of Akshi and Nagaon. There are three prominent temples in Chaul – the Rameshwar Mandir, Datta Mandir and the Hingulja Devi Mandir.

History and Legend of Rameshwar Mandir

Significance of the Rameshwar Mandir Temple

The visitors are required to be dress appropriately, as it is a place of worship. Devotees should follow the decorum and not spoil the serene and pure atmosphere of the area.

Festivals celebrated at the Rameshwar Mandir

Pola: Pola is a festival related to bull-worshiping and celebrated by farmers generally in Maharashtra state in India. Pola comes in Shravana month on Pithori Amavasya day which is also called the new moon day. This is mainly celebrated in Vidharbha region. This is the special day for farmers. On this occasion, the farmers’ first give bath to their bullocks, decorate them with ornaments and worships them. It is called Pola because the demon Polasur was killed by Lord Krishna when he attacked Krishna as a child. This is also why children are given special treatment on this day.  Among the smaller villages located near the outskirts of Alibag, small processions appear with paraded cattle. The procession includes a heavy use of bugles and drums. The traditional dish prepared on this day is called Puran Poli.

Nag Panchami: The Nag Panchami or festival of snakes is celebrated on the fifth day of the moonlit fortnight in the month of Shravan. During the festival people bathe the snakes with milk ensuring their families freedom from danger of snakes.There is yet another legend which relates to the victory of Lord Krishna over the Kaliya snake. The same is remembered and celebrated this day. According to myth, ploughing a field is forbidden on this day. Devotees offer milk and honey to the Snake God, Shesh Nag and seek the blessings of the God. People visit temples, and the streets are lined with stalls offering all sorts of religious souvenirs. It is a tradition among women to apply mehendi, designs applied with herbal paints, on their hands.

Ganesh Chaturthi: Ganesh Chaturthi also known as Vinayaka Chaturthi is one of the important Hindu festivals celebrated throughout India with a great devotion. This day is celebrated as the birthday of Lord Ganesh, the elephant-headed son of Lord Shiva and Goddess Parvati. As per Hindu mythology Lord Ganesh is considered as “Vigana Harta” (one who removes obstacles) and “Buddhi Pradaayaka” (one who grants intelligence).  Celebrated in the month of August or September, this festival goes on for 10 days and envelops the whole of town in a festive vigour.

By Air: The closest airport to the Rameshwar Mandir in Revdanda is the Chhatrapati Shivaji Int. Airport, which is about 60Km away. The Lohegaon Airport is about 104.2Km away.

By Road: Chaul is well connected via road network with other cities of Maharashtra. And you can use private vehicles. The best way to reach Revdanda is by road. Revdanda is on the same road as Alibaug. Alternatively tourists can also take a ferry service and get off at Mandwa Jetty and take a bus or an auto rickshaw from there to Revdanda.

By Sea: One can reach through the Gateway of India by catamaran to Mandva jetty then  Alibag and finally reach Revdanda.

Hotels in Rameshwar: Where to stay

Accommodation facilities are available in Revdanda. There are a few guest houses in the village. Alibaug not far from Revdanda presents a lot of exciting resorts and hotels where tourists generally put up. The Rameshwar Mandir is not very far from Mumbai. Tourists can have a wide range of selection of accommodation in Mumbai. The temple can be reached within about 2 hours from Mumbai.

Kanakeshwar Forest(temple): Kanakeshwar situated near  Alibag on Konkan coast. Kanakeshwar temple is situated in midst of forest so dense that the interior is impermeable to sunlight. The temple is situated on a small hill near the village of Mapgaon which is almost 12 km from Alibag. The hill is almost 1200 feet high and one has to climb 700 – 750 steps to reach the temple. The hill and the surroundings are good to visit. One can see the hilly region and the forest on the hill. The other places to see near Kanakeshwar are the Maruti Temple, Gaymandi (Sculpture of a Cow), Temple of Devi Putrabai, Gaymukh and the plateau of Vyaghreshwar (a small temple of Lord Shiva) etc. The temple of Kanakeshwar is very beautiful; it is a Hoysala style structure built in 1764. A water tank, called a “Pushkarni”, has water almost throughout the year.

Vikram Vinakyak Temple: Vikram Vinayak Mandir is situated inside the Vikram Ispat premises, which is at a distance of around 20 km from Alibaug. This temple is situated across the Revdanda Bridge and is surrounded by beautiful garden and fountains. Located on a small hillock, the temple can be reached by climbing the well paved stairs. Inside the temple, different idols of gods and goddesses can be seen such as Shiva-Parvati, Lord Surya, Shree Radha-Krishna and Goddess Durga.

Birla Mandir: This is a Ganesh temple of very modern architecture in white marble, situated on a small hill (130 easy steps). This is a place visited by tourists from all around. The entire hill is a temple complex with beautiful gardens & fountains all around. This temple is built by Grasim group near Vikram Ispat factory.

Someshwar Temple: Someshwar Temple is an ancient Hindu temple in Akshi, which is situated at a distance of 3 km from Alibaug. It was built by Satavahana rulers and the structure reflects the architectural style of their ruling period. The Someshwar Temple is dedicated to Lord Shiva who also was revered as Someshwar. Legend has that Lord Shiva once drank an ocean that was full of poison and converted it into nectar. Pilgrims throng this place to seek the Lord’s blessings.

Shitala Devi Temple (Chaul): Originally it was built with a tiled roof and wooden structure. In 1990, it was renovated into a modern structure. It is a greatly revered shrine. This temple is 14 Km away from Alibag.

Siddhivinayak Temple at Nandgaon: On the way to Murud there is a temple of Ganesh situated at Nandgaon. It is surrounded by lush green coconut and supari plantations. Murud is a typical konkan town mixing rural & urban facilities.

Korlai village & Church: The village is populated by Roman catholic East Indians & local fishermen. Korlai has a rich historical background dating back to 300 years during Portuguese rule. A village church and adjoining convent school are in a typical rural setting and worth a visit.

Sri Datta Shrine: Another very famous hill shrine at Chaul is Sri Datta Mandir with its own Glory which is about 18 kms from Alibag.  One has to climb around 700 stairs to reach this shrine.There is Hingulja Mandir situated near Datta Mandir, a historic temple built by Pandwas. There is five days Mela in the month of December at the occasion of Sri Datta Jayanti. Trekkers would love to visit this ancient temple.