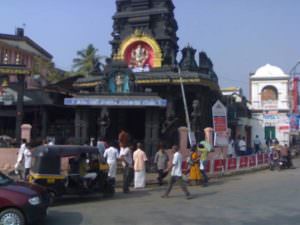 Other deities worshipped at Pazhavangadi Maha Ganapati Kovil are Lord Ayyappa, Goddess Durga, Nagaraja, and Brahmarakshas. Devotees can see beautiful paintings of the 32 forms of Lord Ganesh inside the temple complex. Devotees break coconuts in front of this temple and one can hear the continuous cracking sound of coconuts as if firecrackers are being burst. There is a small tank in front for breaking coconuts and sack full of coconuts get broken here. The main offering at Pazhavangadi Maha Ganapathi Temple is breaking of Coconuts to remove obstacles. Modak is the favourite dish of Lord Ganesh, hence one can offer Modak as well. Another important offering to the Lord is Ganapathy Homam.

There are two images of Ganesha inside the sanctum. One made of Granite and the other made of gold. Though the temple is very small, there are also shrines for Sasthavu, Bhagavathy and Nagas. This is one of the most famous Lord Ganesh temples in Kerala, situated in the East Fort, Trivandrum (Thiruvananthapuram). The temple is situated within walking distance from Sree Padmanabhaswamy Temple of Lord Vishnu.

Significance of the Pazhavangadi Ganapathy Temple

For males, no shirt allowed inside nalambalam (inner complex). Male devotees are expected to wear Kerala Mundu, which is also known as Veshti or Dhoti. For females any traditional dress allowed. Traditional dress like Saree, Churidar, Salwar Kameez or Skirt can be worn. .Ladies need to wear Dupatta to enter Pazhavangadi Ganapathy Temple.

Vinayaka Chaturthi: Ganesh Chaturthi also known as Vinayaka Chaturthi is one of the important Hindu festivals. It is celebrated throughout India with great devotion. This day is celebrated as the birthday of Lord Ganesh. It is observed during the Hindu month of Bhadra (mid-August to mid-September) and the grandest and most elaborate way. The duration of this festival varies from 1 day to 11 days, depending on the place and tradition.

Varad Chaturthi: Varad Chaturthi, or Varad Til Chaturthi, is an auspicious day dedicated to Lord Ganesh. It is observed on the fourth day of the Shukla Paksha of Magh month (January – February). The popular belief is that observing Varad Vinayak Chaturthi Vrat will bring prosperity, happiness and fulfilment of desires. As a legend narrated by Nandi to the Sanatkumara sages, god Krishna was charged with stealing as he saw the moon on Magha Shukla Chaturthi – which was prohibited. He observed fast on this day and got rid of the accusation of stealing. The fast observed on this day is stated to enhance the name and fame of the individual.

Ayilyam Nakshtram in Kanni Masam is of great significance at Pazhavangadi Ganapathy Temple. It has a place designated for Nagas or Serpents. On this day, special rituals and poojas dedicated to Nagaraja and Nagayakshi are performed. It is considered highly auspicious to offer prayers to Nagas or Snakes on the day.

By Air: The Nearest Airport is Thiruvananthapuram Airport. Trivandrum International Airport is about 8 km from the temple.

There are a number of hotels as well as guest rooms near the temple. The rooms are well equipped with all the latest facilities and provide an amazing experience to the devotees.

Karikkakom Sri Chamundi Temple: Chamundi Devi itself is considered as a fierce form of Kali, but the same Chamundi Devi is adorned here in three different forms in three different sanctums and is situated adjacently. Devotees can pay special charges to open those Sanctums and perform their offerings. The deity used to get valuable gifts for helping retrieve stolen articles. This is a regular feature. And many testify that Devi has helped retrieve stolen articles. There is Raktha Chamundi Nada (Raktha Chamundi front path) on the right side of Devi Nada (front path).

This Raktha Chamundi Nada has no idol. Instead, there is wall painting of Devi in Rowdra Bhava (ferocious state) in the wall of Nada. Years back this Nada was used to elicit the truth from suspected culprits. This practice is still prevalent, but it is done before the deity of Chamundi Devi. The Chamundi  Devi form which is existing open always during temple hours is considered as in a calm state. Whereas ‘Raktha Chamundi’ is considered as fierce, but helps devotees to fulfil their wishes. Bala Chamundi Devi is in Childhood form. If Offerings are given to Raktha Chamundi Devi and prayed,  she will remove our obstacles, problems caused by enemies and cures chronic ailments.

Attukal Bhagavathy Temple: Attukal Bhagavathy Amman Temple is one of the famous shrines in south Kerala. It is situated in Trivandrum City. It is the place where Millions of women annually gather together for the famous Attukal Pongala Festival. The Gopuram of the temple is decorated with many sculptures, which is an architectural blend of both Tamil and Kerala culture. These sculptures tell us the story of kannaki charitham, Dakshayaga etc. Main Deity is Kannaki and the other deities in the temple are Lord Shiva, Lord Ganesha, Lord Serpent and Madan Thampuran.

Irumkulangara Durga Devi Temple: Irumkulangara Durga Devi Temple is a Hindu temple located in Thottam, Thiruvananthapuram. It is one of the most ancient temples that is situated about two kilometres to the southeast of Padmanabhaswami Temple in Thiruvananthapuram city. There are two ponds that are located on the premises of the temple. This temple has strong ties with the famous Sree Padmanabha Swamy Temple of Thiruvananthapuram. Priests from the big Padmanabha Swamy Temple would arrive at Irumkulangara by country boats for performing poojas and rituals. The main deity of Irumkulangara Durga Devi Temple is Goddess Durga. The deity here appears as Durgabhagavathi, an avatar of AdiParasakthi. Apart from the main deity, there are many other upa devathas (sub-deities) adjacent to the temple like Lord Ganesh, Nagaraja, Brahmarakshas, Madan Thampuran, Sri Bhairava Moorthy and Navagrahas.

Major Vellayani Devi Temple: Vellayani Devi Temple is a popular devotional centre in Trivandrum, situated about nine kilometres away from Trivandrum Railway Station. Vellayani Devi Temple is said to be built in the 14th century AD.  The main attraction of this temple is its picturesque view. The temple has a big idol known in the local Malayalam language as Thirumudi. This idol is four and a half feet in height as well as width. The idol is Bhadrakali, supposed to have incarnated as the daughter of Lord Shiva. Pure gold ornaments and several precious stones decorate the frontal view of this impressive and large idol.   The temple has eastern and northern towers called Gopurams with statues of different Gods sculptured in them. The Gopurams function as gateways through the walls that surround the temple complex.