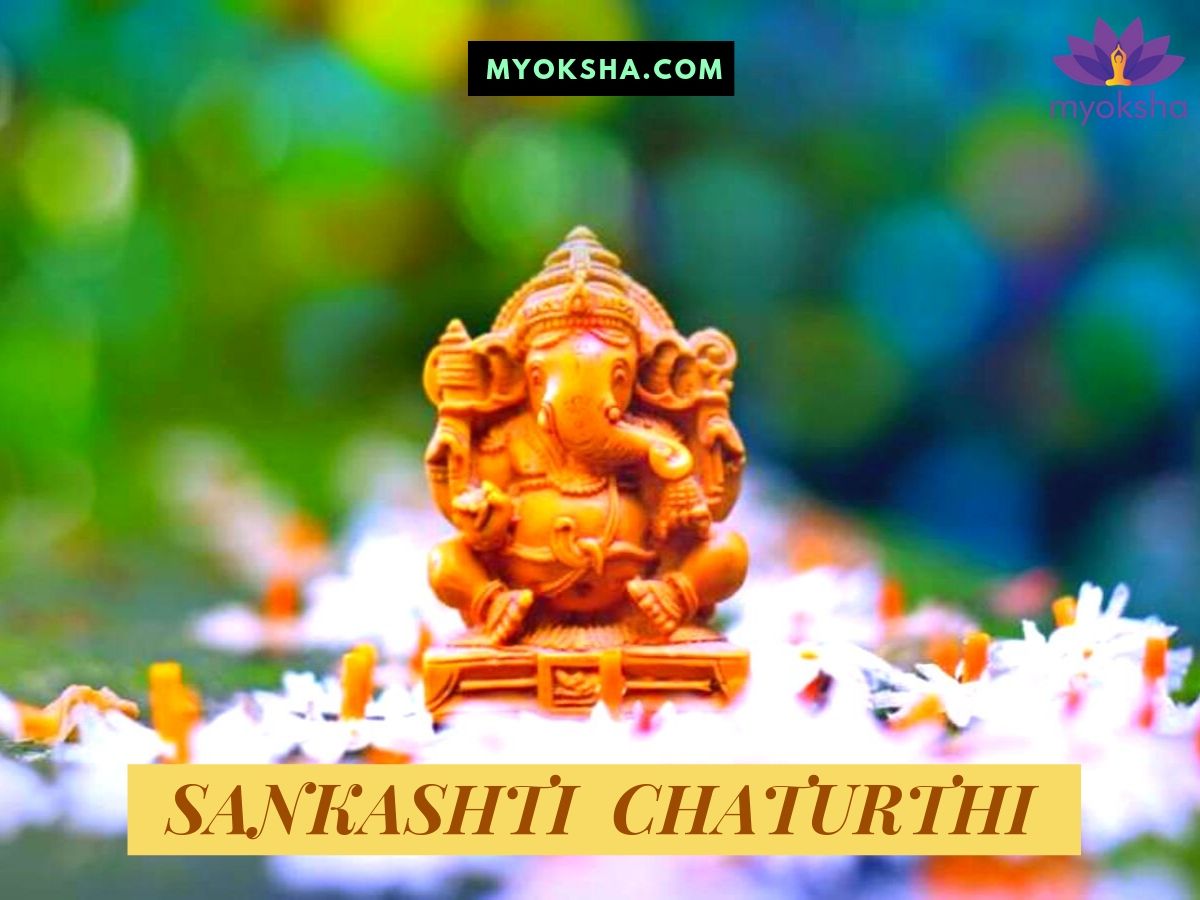 Sankashti Chaturthi is an auspicious day dedicated to Ganesha and most effective among all types of worship done to Lord Ganesh. This day is observed on the fourth day of Krishna Paksha (dark lunar phase) as per the Hindu calendar.

Sankashti Chaturthi fasting is done every month. This fast is mostly observed in Western and Southern India especially in Maharashtra and Tamil Nadu.

Notes: All timings are represented in 12-hour format as per the local time of New Delhi, India. Also, the fasting day for Sankashti Chaturthi might differ for two cities within the same state.

Devotees of Lord Ganesha keep fast from sunrise to moonrise on Sankashti Chaturthi. It is believed that one can get rid of all obstacles by observing this fast.

The fast is supposed to be strict and only fruit, roots (the part of a plant which is below ground) and vegetable products are supposed to be consumed. The staple Indian diet on Sankashti Chaturthi includes Sabudana Khichadi, potato and peanuts. Devotees break the fast at night after sighting of the moon.

If continuous full day fast is not possible, especially for the pregnant ladies, then milk and fruits can be taken.

What is the history and story of Sankashti Chaturthi?

There is an interesting story related to the importance of Sankashti Chaturthi. Once Lord Indra was returning to his home after meeting a sage. On his way back, Indra’s celestial plane lost its supernatural powers and fell down over the kingdom of King Shursen. Seeing Lord Indra, King Shursen came to greet him. At this, Indra told the King about the mishap and asked him for a favour.

It was believed that only the person who kept the fast of Sankashti Chaturthi holds the power to restart the celestial vehicle of Indra. The King then gave instructions to his soldiers to search for the person who had observed the fast of Sankashti Chaturthi on the previous day. But the soldiers found no one had observed the Vrat.

During that time, the soldiers were carrying a prisoner who had died that morning. Indra asked why a sinner is being carried by them. The soldiers replied that the sinner had fallen sick the previous day (Sankashti Chaturthi) and therefore did not eat anything for the whole day till the morning when she died. Therefore, though unintentionally but she fasted on the day of Sankashti Chaturthi.

Just then a wind passed by, first touching the dead sinner’s corpse and then touched Indra’s plane and eventually it restarted. Thus, it is said that the merits gained from the Sankashti Chaturthi Vrat and Puja are so auspicious and powerful that it can remove all the obstacles and troubles from your life, provided it is done with full devotion and sincerity towards Lord Ganesha.

What are the benefits of Sankashti Chaturthi Vrat?

Apart from this, the Sankashti Chaturthi Vrat can also be done to

When should I perform the Sankashti Chaturthi Vrat?

Sankashti Chaturthi is observed in every lunar month of the Hindu calendar on the fourth day of Krishna Paksha. The day is also called as Sankata Hara Chaturthi, exclusively devoted to Lord Ganesha.

During each month, Ganesha is worshipped with a different name and Peeta (seat). The ‘Sankashta Ganapathi Pooja’ prayer is performed on the Sankashti Chaturthi day of each month. Each Vratha (strict fast) has a purpose and has a story of its own called the Vratha Katha. This prayer offering has 13 Vratha Kathas, one for each month and the 13th story is for Adhika (The Hindu calendar has one extra month every 4 years).

What is the procedure of performing the Sankasthi Chaturthi Vrat?

To perform morning pooja, you need to take bath early in the morning and offer a simple prayer to Lord Vinayaka (Lord Ganesha) by chanting the below slokas:

Then you need to light a lamp with Ghee or oil and chant 108 names of Ganesha. The Chants are favourite to Lord Ganesha and has to be recited thrice.

Sankashti Chaturthi puja is usually done in the evenings. The idol of Lord Ganesh is decorated with flowers. Durva grass and fresh flowers are offered. The Prasad made for the occasion include modak and those items and sweets which are liked by Lord Ganesh. You can also offer banana, boondi ladoos, coconut and milk to the Lord.

At the end of the puja a Vrat katha, specific to the month in which the Puja is being performed, is read. The devotees must chant the mantras and stotras dedicated to Lord Ganesh. The fast is completed after the puja and sighting the moon. Offerings made to moon god include sandal paste, water, rice and flowers.

What are the materials required for the Sankasthi Chaturthi Puja?

Materials needed for the puja are as follows:

For the puja, you will need-

For the Prasad, you will need-

Where to perform the Sankasthi Chaturthi Puja?

The Puja can be performed easily at your home itself. But if anyone wants then the puja can also be conducted in any Ganpati temple near to your house or choice.

The rituals, puja and vrat can be done by yourself or by the priest, it depends totally on your choice.

What dress should I wear while performing the Sankasthi Chaturthi Vrat?

There is no such specification regarding the attire to be worn during the puja. One can wear any traditional dress. Ladies can wear sari or suits, and the men can wear dhoti or kurta-pyjamas.