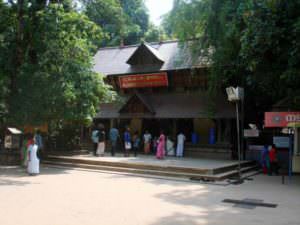 Mannarasala Temple is a temple devoted to serpent worship. It is located near Alappuzha in Kerala. As per belief, the first priestess of Mannarasala gave birth to a five-headed snake, which resided in the ancestral house to safeguard the family.

Sarpa Yakshi and Naga Yakshi are the beloved consorts of Nagaraja. People also believe that Nagaraja as the installed deity is endowed with the form of Lord Vishnu and the spirit of Lord Shiva.

Also the turmeric paste available in the Mannarasala Temple too holds a special distinction of being a highly curative medicine. The serpent gods invite a large number of female devotees, who lack fertility and wish to have children. Such ladies return to the temple once their wish comes true and would make offerings such as bringing back their children to conduct thanksgiving ceremonies.

What is the history of Mannarasala Temple?

The history of Mannarasala Temple as the supreme place of worship of the serpent Gods relates with Parasurama, the creator of Kerala. Legend has it that the first priestess of Mannarasala gave birth to a snake (that had five heads), which resided in the ancestral house to safeguard the family.

Though a land area has formed, the place remains as a piece of land with a high concentration of salt, which prompted the people to leave the place in a hurry. Saddened by this, Parasuraman decided to start a penance in order to please Lord Siva, who ordered him to worship Nagaraja.

After another rigorous penance, finally, Parasurama became able to satisfy Nagaraja who blessed him with a desalinated land and also granted the eternal presence in Kerala. Thus as per the wish of Parasurama, Nagaraja decided to reside at a place selected by Parasurama.

What is the significance of Mannarasala Temple?

Moreover, the Mannarasala Temple covers an area of 16 acres of dense green forest grove. The two main idols are Nagaraja or the serpent king and his consort, Sarpayakshini.

The most popular offering of Mannarasala Temple is ‘Uruli Kamazhthal’, the placing of a bell metal vessel upside down in front of the deity, which restores fertility to childless couples.

Further, the location is very calm, serene and feel of freshness is good because of the trees and the location.

What are the timings of Mannarasala Temple?

Here are the timings of Mannarasala Temple:

What is the dress code for Mannarasala Temple?

One needs to be in traditional attire to visit Mannarasala Temple. Though there is no fee for darshan some special poojas which you perform based on your birth star or your astrological requirements require you to pay the extra cost at the temple.

Which festivals are celebrated at Mannarasala Temple?

Some of the festivals celebrated at Mannarasala Temple are:

On the day of Ayilliam asterism in the months of Kanni and Thulam (September and October), all the serpent idols in the grove and the Mannarasala Temple are taken in procession to the illam (family connected with the temple) where the offerings of Nurum Palum (rice flour and milk), kuruthi (a red liquid made of turmeric and lime) and cooked rice are made.

On the fifth day after Sivaratri, the Mother comes to the Illam after the daily pooja in the Mannarasala Temple and opens the cellar. The prasadam of the Nurum Palum is distributed among the members of the family by the Mother.

The installation of the Nagaraja is in accordance with the concept of Siva. The poojas are also on the Saivite model. Thus Sivaratri assumed special importance among the annual festivities.

The festivities on Sivarathri day at Mannarasala are also associated with Vasuki, the King of Serpents. Legends say that once Vasuki went round the gigantic Thanni tree in front of the temple in a sportive mood and stretched his hoods shining with jewels towards the east; opened his mouth and hissed; all the sands in that place flew away and a little pond came into being.

After the meal, there is no Pooja in the sanctum sanctorum. It may be that Sivarathri was chosen for the ceremony of lights because fasting is compulsory on that particular day. All Poojas including the ‘Athazhapuja (evening worship) are performed on that day. The main items of that day are Sarpabali and Ezhunnallethu (procession).

Which Sevas and Poojas take place at Mannarasala Temple?

Valia Amma has a special pattern of pooja every day, and she must perform pooja in the sanctum sanctorum itself on certain days like

The main Mannarasala Temple premise has two separate sanctum sanctorums, one devoted to Sarpayakshi and the other for Nagaraja. Sarpayakshi also enjoys special privileges like offering daily poojas and is in the Sanctum Sanctorum. In front of the shrine of Sarpayakshi, there is an Ilanji tree (Mimusops Elengi). Serpent images surround it and it has numerous pits for serpents. Also, the quiet shrines of Nagachamundi and Nagayakshi are to the south-west of the Mannarasala Temple and housed in Chitrakudas.

How to reach Mannarasala Temple?

Here’s how to reach Mannarasala Temple:

Some of the places where one can stay near Mannarasala Temple are:

There are several hotels around that includes all the tasty and mouth-watering recipes. Meat, Vegetables and greens are also prepared with different spices. Some of the famous restaurants are Thaf, Cassia, Indian Coffee house, Sisir Palace, Casia, Mushroom and many more.

Some of the temples near Mannarasala  Temple are:

Sree Subrahmanya Swamy temple at Haripad is one among the oldest temples of Kerala. The temple is one of the oldest and most important temples of Lord Subrahmanya. Popular as Dakshina Palani ( Palani of the south). Devotees believe that the temple there even before the advent of ‘Kaliyuga’.  This temple enshrines an imposing idol of Subrahmanya which Parasurama worshipped.

It is at Kumarapuram in Alappuzha District Kerala, India. The Festival occurs during the month of “Kumbham”. This is an occasion when the entire city becomes focused on the temple. Tender coconut frond and plantain leaf-stalks are useful for street decoration.

Panachikkadu Saraswathi Temple, popular as Dakshina Mookambika Temple (Mookambika Temple of the South), is in Panachikadu village around 11 km from Kottayam in Kerala, India. Moreover, the temple is 4 km from Chingavanam town between Kottayam and Changanassery. Lord Shiva, Lord Ganapathy, Sree Dharmashasta, Nagaraja, Brahmarakshasu and Yakshi are also the deities that the devotees worship in Panachikkadu Temple.

Ettumanoor Mahadeva temple in Kottayam district is famous for its murals, especially the painting of Nataraja in the gopuram and ezharaponnana. The major worship in this temple is the lighting of lamps.