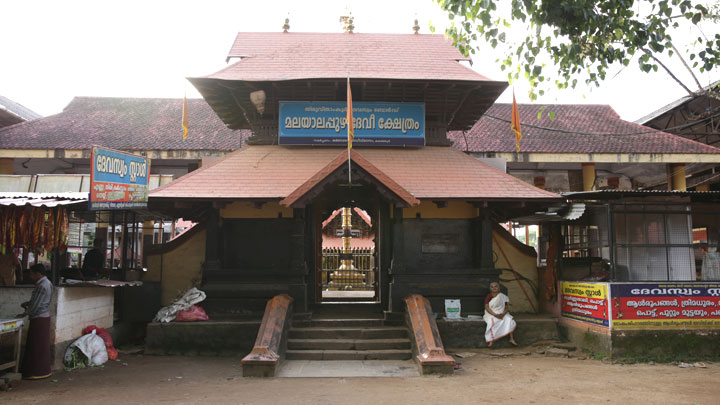 Malayalapuzha Devi Temple is located at Malayalapuzha in Pathanamthitta District in Kerala. Malayalappuzha Temple is dedicated to Goddess Bhagavathy. The temple is famous for its beautiful wall paintings and artistic stone carvings and is situated atop a hill. The idol of the main deity of Goddess Bhadrakali popularly known as Malayalapuzha Amma. It is about 5.5 feet tall and is made of a mixture of molasses, clay and herbs.

The goddess is worshipped for protecting the devotee from enemies, obtaining a job for the unemployed and helping the business to flourish. There is a small idol of Veerabhadra just before the entrance of the sanctum. Another striking idol that can be seen in this temple is that of Goddess Parvathi, with baby Ganapathi sitting on her lap.

The Naga Raja is consecrated just outside the temple, close to which is a Konna tree has grown, which flowers daily all along the year. A Shiva linga that is present below this tree is believed to keep on growing by the people of this region. They also believe that in order to receive immediate rain, the linga should be bathed with tender coconut water. There is a much smaller temple-like structure for the grandfather who actually brought Bhagavathy here and it is called Sri Kandeswari Moorthi Kaavu.

History and Legend of Malayalappuzha Temple

Malayalapuzha Temple Utsavam: The annual festival or utsavam is observed in Malayalam Kumbham month as per traditional Hindu calendar followed in Kerala. The annual festival of the temple commences from the Thiruvathira of Kumbhom and its last for 11 days. Though it is a Hindu temple, Christians and Muslims visit here to seek the blessings of the Devi. Various unique offerings are made at the shrine during the period. Traditional performing arts, music and dance are staged during the period. Caparisoned elephants, melam, fireworks and sheevali are part of the festival. The festival ends with Arattu. The utsava murti of the deity is taken out of the shrine for ritual bathing on the final day.

Vinayaka Chathurthi: Lord Ganesha is worshipped with all sixteen rituals along with chanting of Puranik Mantras during Ganesha Chaturthi Puja which is also known as Vinayaka Chaturthi Puja. Lord Ganesha is considered as the prime god to worship before starting any new venture or task, as per the Hindu customs. The festival lasts for 10 days, ending on Ananta Chaturdashi, and is traditionally celebrated as the birthday of Lord Ganesha. It is believed that Lord Ganesh was born on the fourth day of the bright fortnight of the Hindu lunar month of Magh. Since then, an association between Ganesh and Chaturthi has been established. During the festival days, the Lord is worshipped with great devotion and prayer services are performed daily. There are many devotees who visit the temple and offer their prayers.

Navaratri: This festival is observed twice a year, once at the beginning of summer and again at the onset of winter. These nine days are marked by the worship of the nine forms of Goddess Shakti / Devi. In Kerala, the Vijayadashami day is also considered auspicious for initiating children into the world of letters, which is called Vidyarambham. In the ceremony, words symbolizing the name of God are written on the tongue of the child with a golden ring. The child is also made to write letters in a plate of rice with the help of elders.

Sivarathri: Maha Shivratri, the night of the worship of Shiva, falls on the Krishna Chathurdasi day, on the 14th night of the new moon. In the month of Megha or sometimes in Phalguna also. Shiva is the Supreme Consciousness that illuminates the three states of waking, dreaming and deep sleep. Offering the threefold bilva leaves to the Shivalinga heralds the return to a level of consciousness beyond the three states, which is the fourth state, turiya. The name Shiva does not appear in the Vedas. However, he is identified with the Vedic god Rudra, lord of songs, sacrifices, nourishment, the healer of diseases and provider of property.

Poojas and Rituals at Malayalappuzha Temple

By Road: Pathanamthitta is well connected to all major cities in Kerala and it is called the spiritual hub as most of the Sabarimala pilgrims also reach here and take a different route. Find out Sabarimala Opening Dates here. So, there are a lot of taxis that ply in this region and there are good numbers of KSRTC buses as well.

By Rail: The nearest railway station to this temple is Chengannur, located at a distance of about 33 km.

By Air: The nearest airport to this temple is Thiruvananthapuram International Airport, located at a distance of about 107 km.

There are decent hotels that operate in the area and pilgrims should be able to find accommodation there. There are no facilities to stay in the temple.

The cuisine of Kerala is characterized by the use of coconut. One can’t imagine Kerala food without chillies, curry leaf, mustard seed, tamarind and asafetida. The Dal curry made of small gram and ghee. Sambar, the famous south Indian vegetable stew in which any available combination of vegetables is boiled in a gravy. There are various restaurants nearby that offer such delicious food.

Kodumthara Subramaniyam Temple: The holy shrine is  dedicated to God Subramanya who is the son of Lord Shiva. It is located on the banks of Achankovil River.  His other name is Murugan, commonly used in the neighbouring state of Tamil Nadu and Karthikaya in the northern states. He is also known by the name of Velayudha Swamy because his war weapon is Vel. Carrying Kavadi is the main ritual on the day. People carry various types of Kavadi to the temple in a procession.

Thazhoor Bhagavathi Temple: Thazhoor Bhagavathy Kshetram is a 300-year-old Hindu temple on the banks of the Achankovil river. The temple is also famous for the folk arts and the “Kettukaazhcha” procession with Kaala. The Padayani held in the month of Kumbham is very famous. Padayani performances are held at the temple annually. The Goddess (Amma) accepts the offerings from thousands of devotees. It is believed that viewing Amma in all her glory at this time will free one from all sins and evils.

Chakkulathukavu Temple: The temple has a history of over 3,000 years and is open to people of all faiths. The famous rivers Pamba and Manimala flow on either side of the temple. This Bhagavathy temple is famous for its Pongala Mahotsav. Pongala is a devout offering made of pudding by devotees as a reverent exposure of their awesome offering of love and respect. The ‘pongala nivedyam’ is prepared in earthen pots.  It is believed to be a favourite of the goddess. Only women are allowed to participate in this ritual.