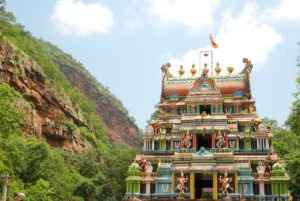 Ahobilam Temple is dedicated to Lord Narasimha and is located in the Kurnool district of Andhra Pradesh. There are two sects – the upper Ahobilam and the lower Ahobilam.  In total there are nine Narasimhasthalams. They are:

Also, the main temple- Ahobilam Narasimha Swamy temple is a holy place that enthralls visitors every time they visit the place. It is a majestic sight to see through bare eyes. The temple is also one of the earliest, falling under Narasimhasthalams. It is at a distance of 70km from Nandyal and 150 km from Kurnool.

What is the history of the Ahobilam Temple?

According to the history of Ahobilam temple’s, there is a legend according to which this is the place where Lord Narasimha blessed Prahlada and killed the demon Hiranyakshipu. Mythology says another story that Lord Vishnu once appeared as half-lion and half-man which is one of his incarnations.

The Devas seeing him shouted crying “Ahobala” (powerful) and “Ahobila” (the cave where currently the sanctum is located) . so this place thus got its name Ahobilam or Ahobala.

What is the significance of Ahobilam Temple?

The significance of Ahobilam Temple is that:

What are the timings of the Ahobilam Temple?

Here are the timings of Ahobilam temple:

Which festivals are celebrated at Ahobilam Narasimha Swamy Temple?

There is one major festival famous as Brahmotsavam whose celebrations take place with much grandeur and splendour during the month of February.

How to reach Ahobilam Temple?

Here’s how to reach Ahobilam Temple:

Here are some places where one can stay near Ahobilam Temple:

Some of the temples near Ahobilam Temple are: